Imagine being an orphan in Tegucigalpa, the capital city of Honduras, a country with the highest per-capita murder rate in the world, a place where the threat of violent death has resulted in an ongoing exodus to the United States. Tens of thousands of immigrants, most of them children, have made the harrowing 1,400-mile march to escape the grave conditions of their home country.

The following story is presented as fiction yet tells the real-life story of a brother and sister and many Honduran children who have found a safe and loving home at a special place called "Amigos de Jesus." 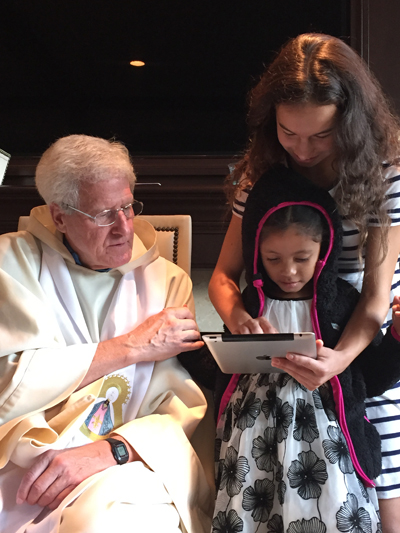 Like other orphans in Tegucigalpa, Sylvia and her little brother Javier live in a mountain of trash.

Javier collects bits of plastic. He'll only get five lempiras (the same as a U.S. quarter) for every hundred bags. He stoops under the weight. It's hard work.

One day, a pickup truck arrives from Amigos de Jesus, an orphanage in Santa Barbara, Honduras. Suspicious of strangers, Sylvia and Javier hide behind a cardboard box.

Suyapa Sabillon climbs from the truck. "Don't worry," she calls to the children. "I was once an orphan."

Sylvia backs deeper into the filth.

"You will be safe at Amigos de Jesus," says Wilson Escoto. He was also once an orphan and is now Director of Operations at Amigos. "We have beds and dormitories. You will be part of our familia."

Javier starts to run to him.

Weary of living on garbage, another homeless boy steps from the shadows. Others follow. But Sylvia is fearful of strangers. She and her brother stay back, sad to see their friends go.

The blistering sun sinks behind the fly-swarming mound. Sylvia makes a mattress out of paper scraps for her brother. He snivels, wishing he'd left with the others. But then, he'd miss his sister.

Sylvia tries to soothe him with a mango she'd found.

A week later, the truck returns.

Sylvia wants a better life for them but remembers countless broken promises.

Javier takes her hand. "¡Por favor! Can we go?"

Sylvia nods. "Nosotros have each other," she says, following him to the truck. "Siempre."

It's a dusty, four-hour ride to the 200-acres of farmland. A sign comes into view: Amigos de Jesus: Hogar de Niños (Children's Home). A 25-foot cross stands on a lush hill behind the main house. Horses, cows, goats, and pigs are part of the community.

Wide-eyed preschoolers and young adults who used to eat out of garbage cans run out to greet them. "¡Hola!"

Like the scores of other children living here, this is a safe haven for Sylvia and Javier. It's their home, school, playground, and above all, their family.

Sylvia can't remember ever going to bed with a full stomach or sleeping under a real roof.
In the morning, Suyapa wakes the children. "¡Buenos Dias!"

Breakfast! Eggs, ham, cheese and beans. The orphanage serves 125 pounds of beans each week.
Javier eats with his fingers. Sylvia quietly points to a fork.

Afterward, they go to school for the first time ever -- reading, writing, and arithmetic. Soon they'll learn English and be introduced to the computer lab and library.

Sylvia's favorite subject is art. She draws a flower with a pink marker. Javier adds a stem with a green marker before going out to play fútbol with his friends.

Amigos has a welding shop and wood shop, plus agriculture and construction projects. An older boy shows Sylvia how to milk a cow. Milk splatters all over Javier. When it's his turn, he pays her back with a giant squirt. Everyone laughs. 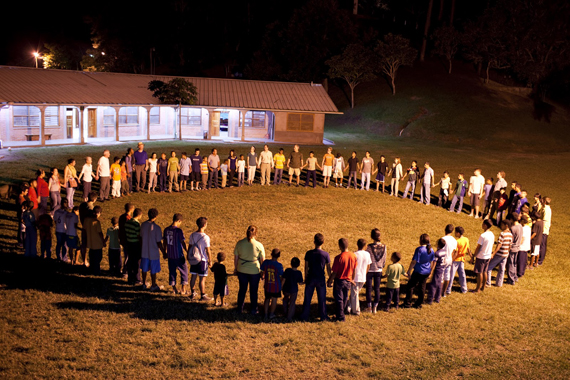 After dinner, Wilson Escoto leads a prayer circle in the main courtyard. Sylvia, Javier, and the other children hold hands in a giant loop of love and gratitude.

"Gracias for my new home, " Sylvia whispers. "And my new family."

Javier smiles at her. "And gracias for my hermana."

Amigos de Jesus supports over 150 children in Honduras and 400 around the world. They're funded entirely through private donations. If interested in getting involved, their website is: http://amigosdejesus.org/