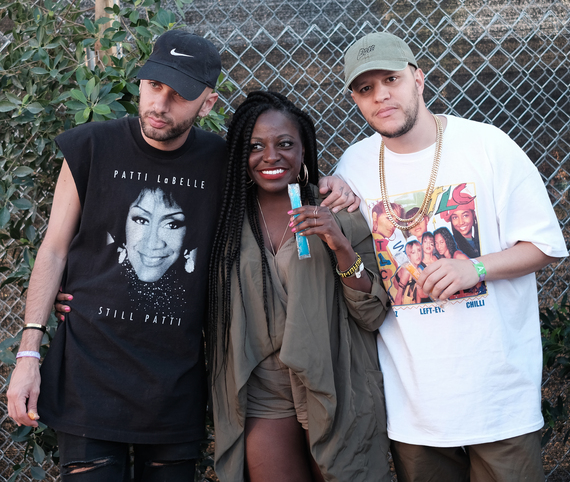 Fresh off of their hot performance at this years 2016 Coachella Valley Music and Arts Festival, Amine Edge & Dance exhibit a cool that is undeniable. Filling the Yuma tent with excited fans the childhood duo brought their A-game, as usual! Sitting down over blue and orange popsicles we talked Coachella, going on tour plus their creative secret.

M: How was your set today?

AE&D: It was very nice it was cool, it was very nice. When we started the set it was empty and then after like 5, 10, 15 minutes it was full. So, we're very happy about it.

M: I have been peeping you guys for a minute. My best friend in the U.K. told me about you guys and I was like listening to you nonstop in Brooklyn on the bus loving it.

M: When you're creating music together, how do you end up with these master pieces?

AE&D: Actually we don't produce music together. I stop track and then I send it to him through my dropbox and then he finishes it. Or, like sometimes he does stop track and sends it to me via dropbox and I finish it. We never produce together because I live in Marseille and he lives in London.

M: You are the second artist to tell me you live separate and work separate yet you send your work over WeTransfer or something to that nature.

M: Wow! I wonder if that's like a creative thing, because I work better alone.

AE&D: And, you have to produce in the day time and when I cant think in the day, I have to think at night alone.

M: I think and work better at night too!

M: What has been most rewarding thing that has progressed in your career thus far?

AE&D: First of all we are best friends, so that's the main thing that makes things work.

AE&D: Yes, and we just want to stay like this. We still want to get old and still have the fame and still doing the music we like, keeping the passion of it. We work really hard to keep it.

M: So how do you make a decision -- and this is something I struggle with creatively saying like this is done, its good let it go -- don't keep tweaking it?

M: But is it a matter of being on the same page and knowing it together? Lets say, one of you likes the track and the other doesn't.

AE&D: Yea, but we have the same taste and stay honest. We're always honest. Sometimes he likes something and I don't like something but its very rare. We don't talk about it, its like -- you don't like it ok remove it. Because we have to both be happy.

AE&D: We don't have to talk to much, if don't like it we fix it. If we want to be selfish and like no, I like I want to keep it -- then we just do a solo and we separate you know. But its not what we want to do. If he likes something and I like something it means that its very good. If he likes it and I don't like it means that maybe some other people may not like it -- you know so it's very good when I like it and he likes it as well.

M: Did you do anything out of your norm regarding the set you chose to play at Coachella?

AE&D: Yea, we always do a different set. We have tracks on USB and we go with the flow you know. We have never been to Coachella, we don't know what Coachella is, so everybody has been making a big deal out of it.

M: Yea, I know right same in my world.

AE&D: Even my girlfriend was like OH Coachella! So this time I said, we have to prepare a track list we know. Not a new mix but a track list. Some tracks that we don't have to search and know they are good. We felt we should play quality music that we should like and no track to test. Sometimes we have tracks and we just want to try them out and it's good but we didn't do it this time. We played 100 percent sure.

M: And, whats the feeling you have right now after giving your all from your performance just now?

AE&D: Proud, yea of course. It's like we made it. You know when you play at Coachella its like a dream. We are happy to make the people happy because U.S. crowd is not really easy so we are happy that they enjoyed it. The room was full really quickly. So, we are surprised and happy. I feel lucky!

M: So for 2016 your heading on tour next. Are there any other benchmarks that you feel ok -- we have done Coachella, lets aim for this or do you let those kind of opportunities come to you and let things flow?

AE&D: Yea, well we have a booking agency who books for us and they know what is good for us and what is not. We know a few spots but we cant know everything. Booking agencies they know better than most, so the booking agencies try their best to bless us with all the events in the best spots like Coachella. And we are going to do two big festivals in the U.K. next month.

M: This has been an amazing opportunity to chat with you both. I am looking forward to keeping up with your success.