There’s no denying that the Amish are fascinating to the rest of us ("the English," in Amish terms).

They’re the topic of reality television shows and documentaries, a particularly memorable Nancy Drew novel and the Academy Award-winning 1985 film "Witness." Vanilla Ice "went Amish." We buy their furniture and jam, and may occasionally spot their buggies when driving on country roads through America’s heartland.

Many may not realize, however, that though the Amish make up only a tiny percentage of Americans (less than 0.1 percent), the Amish population has grown enormously since the early 1960s, with much of the increase occurring in the last two decades.

The Amish in America trace their roots to the Anabaptists, who appeared in Switzerland during the Protestant Reformation of the 1500s. Anabaptists, or "rebaptizers," were noted for their second baptism of adults who had been baptized as infants in other Christian traditions. They believed that only adults could make the decision to follow Jesus Christ and therefore did not practice infant baptism themselves. They also believed that the church should not be associated or interfered with by any state.

In 1693, Jakob Ammann, a Swiss convert to Anabaptism, sought to revitalize the movement after it had been driven underground by civil and religious authorities threatened by its rapid spread. Ammann preached that Christians should adhere to strict guidelines, including not cutting their beards or wearing fashionable clothes.

He also advocated shunning excommunicated members (still a practice in some Amish communities). This led to a split between his followers and other Anabaptists living in France and Switzerland at the time. Ammann’s followers became known as the Amish, and they emigrated to the Americas in the 18th and 19th centuries.

Modern-day Mennonites are similarly descended from the 16th century European Anabaptists, but do not believe in separating themselves from the rest of society, as the Amish do.

Amish communities are today found in 30 U.S. states, as well as in Ontario, Canada. The first North American settlement began in about 1738 in Pennsylvania, and their count has steadily grown until it boomed in recent decades. 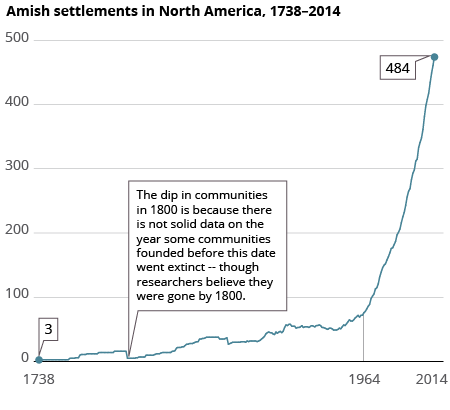 The Amish are a Christian denomination who value simplicity, local church authority, pacifism and separation from the world. Because of their strong sense of community and belief in helping one another in times of difficulty, they do not participate in government programs like Social Security (Congress exempted the Amish from Social Security payments in 1965, though they do pay income, property and school taxes) and typically don’t have insurance (they were also granted an exception to the Affordable Care Act’s individual mandate).

Amish children attend school, many at one-room private schools, typically through the eighth grade. Though for most children in the U.S., school is compulsory until age 16 or older, the U.S. Supreme Court ruled in its 1972 decision Wisconsin v. Yoder that Amish children could end formal education at age 14. After that, most participate in vocational training.

The Amish take seriously the Bible's command not to be “conformed to the world.” For this reason, they do not connect to public utility grids. Contrary to popular belief, however, they do use modern technology -- some of the time and very selectively. For example, “Amish hackers” have found ways to operate modern conveniences through traditional means, like kitchen blenders that work on air pressure or farming tools powered by hydraulics.

According to Joseph Donnermeyer, an Ohio State University professor who has studied the Amish for the past 25 years, the group could surpass 500 settlements in 2015 (there are currently 484). The term “settlement” refers to a loosely defined geographic area where the population is mostly Amish. Donnermeyer, with the help of an Amish librarian who lives in Ontario, tracks settlements -- the definition he uses is a community where there are at least three Amish families, they are able to hold a church service, and cars are not permitted. Car use typically provides a clear-cut technology boundary between the Amish and other groups called Plain Anabaptists, he said.

He noted that about two-thirds of current settlements have appeared since 1990. “Up until then,” Donnermeyer said, “[the Amish] were able to absorb families into existing communities.”

Many newer settlements are small, with only one or two church "districts" -- essentially, congregations. Donnermeyer said that these districts are the “exact opposite of a megachurch.” They typically include just a few dozen families, who hold worship services in members’ homes.

According to the Young Center for Anabaptist and Pietist Studies at Elizabethtown College in Pennsylvania, there are about 290,100 Amish living in North America. This includes adults and children, although only adults who have been baptized are considered full members of the church. (Amish are typically baptized between the ages of 18 and 21, since the church emphasizes that joining is a voluntary decision.) In most Amish communities, children make up over half the population.

It’s difficult to get an accurate estimate of the Amish population in specific communities because there is no central church registry. But as more families move to a settlement, more church districts usually spring up. Newer settlements with many districts indicate rapid growth, Donnermeyer said, and older communities tend to be larger. 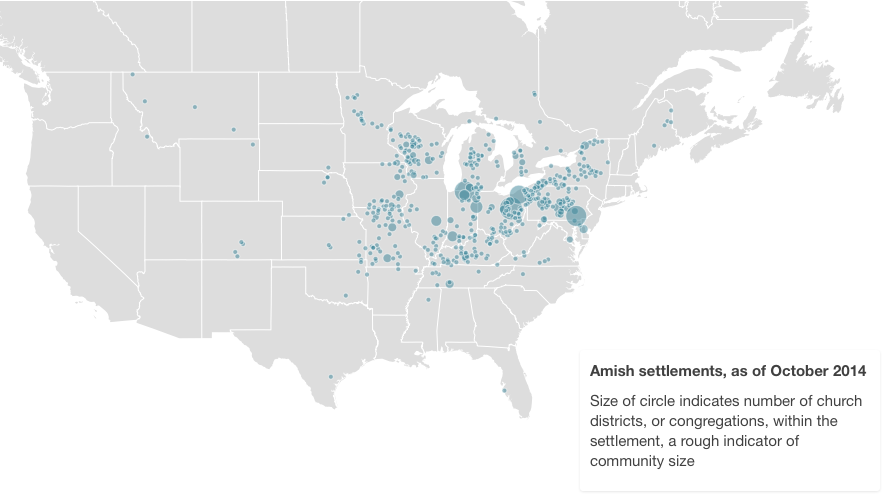 According to Donnermeyer, much of the current population growth is due to the Amish's large families. There aren’t many converts to the Amish way of life (those seeking to join must be willing to learn the dialect and be baptized), and not too many leave the fold (though we seem to be particularly fascinated by those who do -- see "Breaking Amish," "Amish: Out of Order" and various other shows on the topic).

The oldest currently active Amish settlement in the U.S. is in Lancaster, Pennsylvania. It was founded sometime around 1760 and now has 187 church districts. So far in 2014, eight new communities have sprung up, though Donnermeyer predicts there will be more before the end of the year.

“With the Amish population changing so fast,” Donnermeyer said, “every time I think I’m up to date, someone sends me a note asking me if I’ve heard of a new [settlement].”