Sri Mata Amritanandamayi Devi, aka Amma the Hugging Saint, kicked off her 25th North American tour with a six-plus hour hug-a-thon in a suburban Seattle hotel ballroom on May 27.

There's more to Amma's bliss than just a sandalwood-scented cuddle: her Embracing the World charity has raised millions for global disaster relief, sending funds, medical supplies, food and shelter to victims of the 2010 Haiti earthquake, Hurricane Katrina, the 2004 Indian Ocean tsunami and other calamities, particularly in her native India. In the aftermath of the Japanese earthquake/tsunami/nuclear disaster this year, her volunteers have focused on helping the hard-hit coastal city of Rikuzentakata. (Amma will visit Japan in late July, several months later than originally planned, to give the region more time to recover.) 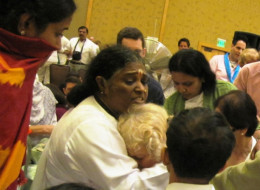 Speaking through a translator as she continued embracing dozens of devotees of all ages, ethnicities and creeds, Amma expressed her views on natural disasters and the suffering of the innocent.

Why do natural disasters happen?

It's mainly due to our own actions that negatively affect nature. Destroying forests, polluting rivers, cutting down trees. We have disturbed the balance of nature, disturbed the balance of the earth. Just like a building standing on pillars: if you demolish one pillar, that will create an imbalance in the whole structure. We are drilling oil wells, we are destroying mountains, polluting rivers, cutting down trees. So the only way is to have a compassionate approach. Look inwards, within you, and try to have a compassionate approach to nature. Our body is constituted with numerous cells. You can have some single cells that malfunction, and it creates an imbalance in the whole system.

But why do these bad things happen to good people?

It can only be attributed to karma. But for example, suppose there's a huge banyan tree filled with ripe leaves on it, and an eagle flies and sits on one of its branches, and all of a sudden, the leaves wither away. Maybe those leaves were about to be shed anyway, and it was just their time. So this entire universe has a rhythm to it. There's a harmony. There's a rhythm in every action that you can have, knowingly or unknowingly. Something that happens in one corner of the earth can have an impact on the other corner. So we are not isolated like islands. We are all part of the universal chain. If we expect others to change first, nothing will happen. Instead of expecting others to change first, we have to change first and then others will change automatically.

Do you mean karma from a past life, or something that disaster victims have done in this life?

Since we cannot find any reason in this birth, in this lifetime, we can only attribute it to the unknown past. But unless we take serious steps to stop this, holding discussions and dialogues about doing the right things, explosions like [the Japanese nuclear disaster] will keep happening.

Do you have any message for the Americans suffering from natural disasters, such as the recent tornados?

Amma is very sad about the victims. However, there's no other way than accept the situation we're in. There is a greater message that we should be more alert when dealing with nature, it should be like standing at gunpoint. However you should also know that this moment alone exists, just like any other decision, happiness is also a decision. Whether we laugh or cry, days will go by. So we should learn to laugh rather than lamenting about our past. Gather enough strength and courage and develop awareness.

For more on my meeting with Amma, including photos and video, visit my Belief Beat blog.