Update: Activists in Colombia have now started a campaign with the hashtag #SonParasNoBacrim to expose the fact that the paramilitaries continue to exist, and that they are not merely criminal gangs (or "Bacrim," as the U.S. and Colombian Governments Claim)

In its latest report, Amnesty International (AI) confirms what the Colombian and U.S. governments continue to deny - that paramilitaries (a/k/a death squads) still exist in Colombia and they continue to carry out human rights abuses. 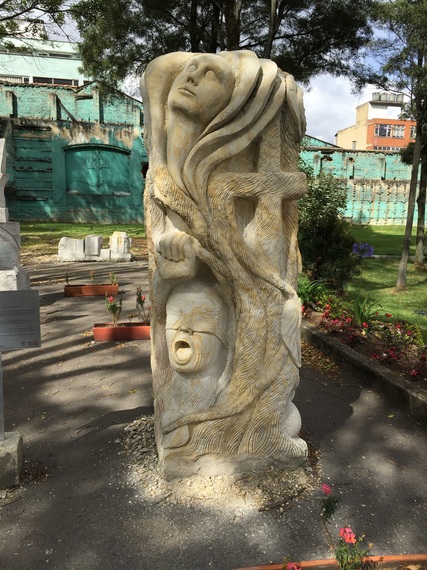 Paramilitary groups, which the government referred to as criminal gangs (bandas criminals, bacrim), continued to commit crimes under international law and serious human rights violations, despite their supposed demobilization in the government-sponsored Justice and Peace process that began in 2005. Paramilitaries - sometimes acting with the support or acquiescence of state actors, including members of the security forces - threatened and killed, among others, human rights defenders.

In these mere two sentences, AI says so much. It cannot be emphasized enough how adamant both the U.S. and Colombian governments are that the paramilitary death squads are now a thing of the past. Last October, when a delegation I was on met with the U.S. Ambassador to Colombia, Kevin Whitaker, at the U.S. Embassy in Bogota, he himself scoffed at the idea that there were still paramilitaries. Instead, he insisted, as the Colombian government does, that there are merely criminal gangs that are carrying out violence throughout the Colombia. While this may seem to be a distinction without a difference, it is not.

The implication that Whitaker, et al. are trying to make is that the killings by the groups (whose true name dare not be mentioned) are not politically-motivated and are not linked to the Colombian state as the paramilitary crimes have historically been. Of course, such a position is self-serving, for it allows both the Colombian state and its U.S. sponsor to be held blameless for serious human rights abuses done on their behalf.

Those of us who try to work in the field of human rights can clearly see that the speeches about the de-activation of paramilitaries do not coincide with the truth. They want us to think that the paramilitary organizations that are very active these days are just gangs of common criminals, without any political objectives and with no relation to the armed forces or any other government agency or any members of the political class. But, your Excellency, why would it be that those organizations, with new names, are constantly sending threatening messages to social leaders and to defenders of human rights, using language that supports official policies? Have you not noticed, Mr. Ambassador McKinley, how many of those threats have been fulfilled implacably, with disappearances and extrajudicial executions, displacements and exiles, while, as always, the identity of the perpetrators of such crimes remains a mystery?

It concerns me profoundly, your Excellency, that the new military assistance from your government strengthens and provides new resources to the Army and the Police so that they can transgress, as they have been doing, the rules of international humanitarian law in the provinces of Cauca, Nariño, and Putumayo, especially in the campesino and indigenous areas. They refuse to recognize the areas of civilian population, involving people in the war against their will, using them as shields against their militant enemies, producing destruction of their crops and their houses and victimizing innocent people that they then try to pass off as combatants.

As the new AI Report shows, this letter could have just as well been written today, as U.S. aid continues even in the face of continued human rights abuses by the Colombian state and its paramilitary allies. Thus, as the AI report explains, "[t]he USA allocated some US $174.1 million for military and US $152.2 million for non-military assistance to Colombia. In September [2015], 25% of the total military assistance for the year was released after the US Secretary of State determined that the Colombian authorities had made progress on human rights." However, the U.S. Secretary of State's determination in this regard is at variance with the facts on the ground.

Thus, reminiscent of Father Giraldo's concerns, AI explains that, "[i]n his January report, the UN High Commissioner for Human Rights . . . expressed concern about impunity and the human rights impact of the conflict, especially on Indigenous and Afro-Descendant communities and human rights defenders. Although the report noted that all warring parties were responsible for human rights abuses and violations, it stated that paramilitaries (referred to as 'post-demobilization armed groups linked to organized crime') represented 'the main public security challenge.'" As AI notes, such human rights abuses include forced disappearances, now numbering over 45,000 (some have put this figure at over 90,000); and forced displacements, now numbering over 6.6 million.

In the month of March, 2016 alone, 30 individuals have been assassinated by paramilitary groups. Of these, "14 were community and political activists and 16 assassinated in the context of 'social cleansing' operations by paramilitary groups." In addition, on April 1, 2016, prominent human rights leader and former senator, Piedad Cordoba, barely survived an assassination attempt by paramilitaries in the Afro-Colombian town of Quibdo. Again, these are not the random acts of "criminal gangs" as Colombian and U.S. authorities would have us believe.

Of course, it is the denial of the very existence of the paramilitary death squads -- the worst human rights abusers in Colombia -- which gives the U.S. the pretext to certify Colombia's human rights record and to continue delivering lethal military assistance to that country. And, there is certainly a logic to this, for the very purpose of the paramilitaries - the brain child of U.S. General William Yarborough back in 1962 - was to allow for massive repression in Colombia and other countries while giving plausible deniability for such repression to U.S. client states and their U.S. backer. It appears that this strategy is going quite swimmingly, much to the detriment of Colombia's civilian population.