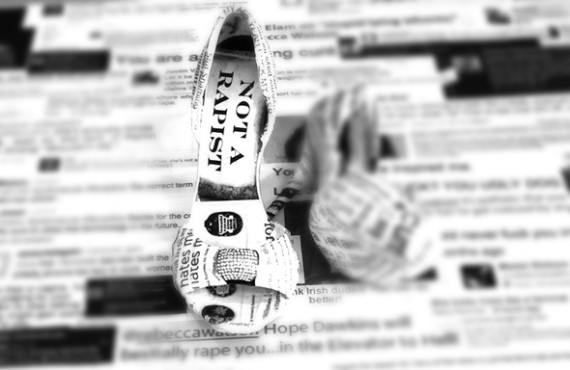 Or, more properly, awe-inspiring. On her own she is quite a person: A dedicated artist who produces cool jewelry, who creates wonderful paintings, who is an outspoken supporter of critical thinking and science, and who is also an intelligent, thoughtful, and vocal feminist.

She does all this—and much more—every single day while slogging through an unbelievable miasma of misogyny.

And I do mean unbelievable. For having the temerity to say that women should have equal rights, opportunities, and treatment as men, she gets a tsunami of hatred, venom, death threats, rape threats, and more. It would be enough to break down hardened people, and it has. But not Amy. She manages to not only deal with this horrifying onslaught but also turn it into art.

I mean that literally. With the help of several other atheist and skeptical women, Amy has created an exhibit called A Woman’s Room Online: a free-standing 8x10 foot room that is being installed in the L.A. Center for Inquiry office. It will look superficially much like any office in which a woman might work, with the usual accoutrements.

But each object will be covered with messages these women have received on Twitter, Facebook, and email. Real messages, actual things sent to them that are the vilest, most hateful examples of the worst humanity has to offer.

Amy Roth and Phil Plait What happens when you treat people with respect: They like you. Photo by Amy Davis Roth

I recently visited Amy and stayed with her for a few days. She showed some of the individual pieces to my wife and me, and they are as powerful as the words plastered on them are repellent.

The words are hard to read, so difficult to imagine an actual human sending them to another human. They run the range from self-satisfied and arrogant to graphic and explicit threats against body and life. Sexism and misogyny had been brewing in the atheist and skeptical movements for some time but exploded when Rebecca Watson brought attention to them, and people were further polarized after Richard Dawkins made his “Muslima” comments in response. That was years ago, and things are no better ... as we've also seen in so many other online communities as well.

Perhaps sunlight is the best disinfectant, and art has a way of focusing that light. Over at Skepchick, Amy herself wrote a description of her installation, and I strongly encourage you to read it.

I think this is an important piece of art. I suspect a lot of people really don’t have any idea just how much filth women (not only feminists, but just women on the Internet guilty of Posting While Female) have to slog through every day just to exist online. It’s horrifying—and sadly, used as a way to shut women up; read Amanda Marcotte's recent post about this.

A Woman’s Room Online will hopefully open a lot of eyes. And minds. And, hopefully, hearts.

The exhibit opens this weekend, running from Sept. 13–Oct. 13 daily. For more information, contact the L.A. Women’s Atheist and Agnostic Group (a group Amy founded, and they're accepting donations through there as well).