Whatever you think you know about Amy Grant, you're probably wrong. In the ten years since she released her last full-fledged studio album, the so-called queen of Christian rock has been taking a turn as mom and daughter, nursing ailing parents and raising children with her husband, country star Vince Gill. 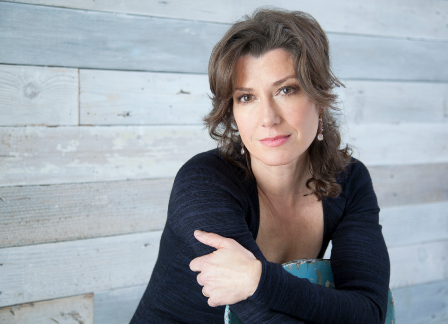 But Grant has also quietly been working to transform herself into a performer that fits none of the roles invented for her previously by the church, the recording industry, and the media: not a petticoats-and-cowboy boots evangelical icon, nor a milquetoast Madonna, not a satanic sellout nor a stealth proselytizer.

The Amy Grant that appears on her new album, How Mercy Looks From Here, her first in a decade and one of her best, is a mature songwriter pushing at hard experience to elicit her truth and enlisting accomplices from the secular music world, like Sheryl Crow and her childhood idols Carole King and James Taylor, to expand her reach and her sound. Faith is a fact of Grant's existence, but the text she's preaching from in these songs is her own life.

"The great thing about a song is that no one has to know your story," Grant said in a recent interview. "But if you tell it in a way that has clarity and means something to somebody else, then it can apply to their story." But anyone who has followed Grant's career will hear her reviewing the turns her story has taken. From the opening track, "Better Not to Know," about the dissolution of her first marriage, to the title track recalling memories of her mother dredged up by the 2010 flooding in Nashville, the album, though full of optimism, is haunted by loss.

God, Grant makes clear, has redeemed many of her regrets. "Don't Try So Hard," a song about being the overscheduled mother of overscheduled children, contains an unmediated statement of justification by faith: "God gives you grace and you can't earn it/ ... Gave you His Son so you'd believe it/You're lovely even with your scars/Don't try so hard." Despite what her detractors from the fire-and-brimstone wing of Christianity have often maintained, it's hard to think of another contemporary Christian artist who enunciates the evangelical message any more clearly than Grant.

But neither is any Christian artist so obviously intent on making her faith part of her artistic stance, instead of the other way around. It was Grant whose celebrity as a teenager in the 1970s drew the attention of the major record companies to Christian rock, and made "crossing over" to the secular market a mark of success in the hermetic evangelical industry. How Mercy Looks From Here hints that Grant's ambition is still to erase the line between Christian and secular genres, but to do it without leaving home.

Crow's presence on the record shows how she hopes to pull it off. A leader of the singer-songwriter renaissance of the 1990s, Crow, who now lives in Nashville, has been in Grant's orbit since at least the mid-2000's. (Check out Crow and Gill's appearance at Eric Clapton's annual Crossroads benefit concert in 2007 here). The women became friends in 2011, said Grant, when Crow reached out her to about Grant's mother's death.

"I've never had a girlfriend who has a life so like mine," Grant said about her friendship with Crow. "She knows what it's like to put your heart and soul into your music and everyone critiques it. What it means to have your life falling apart in a bad stretch, and you take a few deep breaths, tune your guitar and walk out on stage."

Her friendship with Crow also helped Grant convince Eric Paslay, who has penned No. 1 hits for country stars, to contribute one of the new album's best songs, "Deep as It Is Wide." Grant had been after Paslay for months to let her have the song, which Paslay planned to put on his own debut album. He finally relented when Crow, "who Eric thinks of as royalty," Grant said, agreed to sing on the track. On the album, Grant, Paslay and Crow trade off verses.

Late last year, Crow and Paslay joined Grant onstage at Ryman Auditorium, the historic venue on Music Row, to sing the tune. Afterward Grant told the crowd, "I sure love living in this town. There are songs everywhere." By associating with headliners like Crow (and Taylor and King), Grant may have as good a shot as anyone at landing them on her albums.

In the ten years since her last collection, the music world has become more sympathetic to a Christian artist like Grant and listeners discriminate less against a certain kind of intuitive faith that Grant is fluent in. On her recent media tour, the hosts on NPR and the Today show uncontroversially noted her Christian contemporary genre and one needing less explanation than, say, dub step.

But Grant seems aware if she wants credibility as an artist, she has more work to do, most of it outside the traditional Christian comfort zone. In the publicity campaign for the new album, she has included the gay press, acknowledging for the first time a part of her audience that has been with her since she was a teen. "I know that the religious community has not been very welcoming," she told a St. Petersburg publication, "but ... the journey of faith is just being willing and open to have a relationship with God. And everybody is welcome."

Grant would be right to answer that no evangelical entertainer has spent more time outside the Christian comfort zone. Her crossover attempts of the early '90s required her to explain unguarded comments she'd made to the mainstream press, about her occasional use of bad language or about sex. Despite those experiences, she still rambles without fear into all subjects, tying them back, miraculously sometimes, into her love of God or her children or her life.

Her conversation can seem reckless, until you realize she doesn't separate her spiritual life from her living. In our interview, Grant credited her late mother with modeling a faith that recognizes no boundaries between "real life" and religion. "Her faith was totally integrated into her life," Grant said. It's a goal Grant has for her music too.