I met Amy Poehler at the Glamour Awards in 2009. We were two of 12 Women of the Year, and we bonded immediately. I was a fan of her work at Saturday Night Live and was very excited about meeting her that night. At dinner, she just about begged me to let her help my organization, Worldwide Orphans Foundation (WWO). I knew then that she and I would be friends.

She has kept her promise to help WWO. She hosted our Santa Monica event in the spring of 2010 while quite pregnant with her second son, Abel, and then hosted a birthday party in June 2011 for one of our board members to help raise money for WWO. She co-hosted our gala in the fall of 2011 and was a special guest at our 2012 gala, where we auctioned off a lunch with her. That same week she helped us auction off a tour of the set of Parks & Recreation on eBay. From the very beginning, Amy expressed her desire to travel with me to learn about the orphaned children we serve. She promised that she would do it when her kids were just a bit older.

Last week, Amy Poehler became our Ambassador of Arts and accompanied me to Haiti with a service project group that included the "Puma Guy" and Junior Board Chair, Noah Gonzalez, our board member, Mary Knobler and her daughter, Grace, and the Weiss family, Kyle, Lisa (mom), and Kira (sister to Kyle) who run FundaField.org, which builds soccer programs and fields in the third world.

We went to Haiti to work with orphans and at-risk children in the mountainous community of Kenscoff, 15 km south of Port-au-Prince. We have a youth training program that has demonstrated strong leadership, implementing Toy Library, Music-in-Motion, sport, recreation and play programs for kids in four orphanages and a tent camp. It was a proud week for me to see how in just a couple of years, WWO has successfully taught early childhood development to young people, who are now able to help children and train adult caregivers in the community.

The group bonded quickly at the airport and worked like an "amoeba," moving and flowing together on walks up the mountain and at play with the children. We all became attached to the youngsters we serve and played for hours with them. Affection and connection grew each day, and it was very hard to leave them after each session. Amy sat peacefully with children on her lap and in her arms at the Toy Library. She observed the children and figured out who needed some touch and affection. I hardly saw her without a child or two nestled into her body. She played hand games, painted and danced. She cuddled and tickled the children. Any time the music came on, you could see her moving her hips and raising her arms. In fact, on the soccer field one day, she was the DJ. She was completely in the moment and by the end of the week, she was not eager to leave and clearly emotionally transformed by what she had seen and heard. 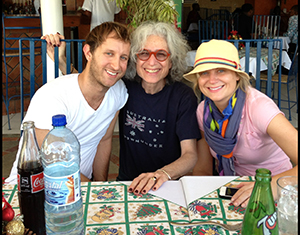 Our new Ambassador of Arts was given her ID badge on the last day of the trip, which she photographed and emailed it to her parents. She was in fact proud of her work and grateful for the opportunity to serve. That is the goal of service, and if ever there was a woman born to serve, it is Amy Poehler.

On our flight home, I debriefed with some of the group members and we all agreed that it was really hard to have left the kids. We missed them and felt at a loss. I wrote a blog about these feelings, which after all these years, I still experience with all my service trips. I gave Amy my laptop to read the blog and she gave me her headphones and had me listen to a song by The Gabe Nixon Band, called "All Will Be Well," which she said was about me and my work. I stood in the aisle of the plane crying. I turned to her and she was crying as well. We were in sync feeling the depth of the work that we had just experienced.

We are planning and scheming about more work. Amy has a lot of ideas about how to help kids express their dreams creatively. She has vision, and that is what all our Ambassadors should have in order to help WWO reach thousands more orphans and vulnerable children who need our help and support. It is through creativity that we can make the most difference in the lives of children around the world.