There's no secret that the writers of "Parks and Recreation" love "Game of Thrones."

The last few seasons have contained at least one reference -- "What is wrong with you today? Did they cancel 'Game of Thrones'?" -- to the popular HBO drama. And in a new interview with Time Out New York, series star Amy Poehler fantasized about how her cast from "Parks and Rec" would fit into "Game of Thrones.

"Well, come on, I would be Khaleesi [Daenerys Targaryen], of course," Poehler said referring to her character Leslie Knope. "Ben would probably be Jon Snow, because he’s so tormented. Ron would be Stannis Baratheon."

Time Out New York suggested Tammy 2 (Megan Mullally) as Ron's (Nick Offerman) Melisandre. "Yes! And Tom would be ... Uh oh, I hate to break it to Aziz [Ansari], but Tom would be, like, Theon Greyjoy, which is not good right now. Ann would be Sansa, April would be Arya, and Andy would be one of the dragons. [Laughs.]"

EW previously imagined what would happen if producers from "Game of Thrones" and "Parks and Recreation" wrote episodes of each other's shows. The results are here. 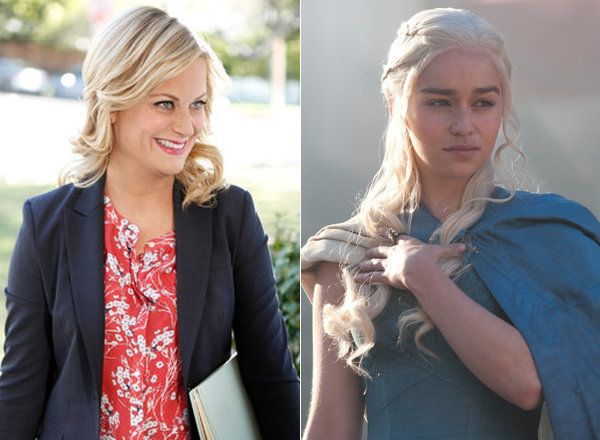