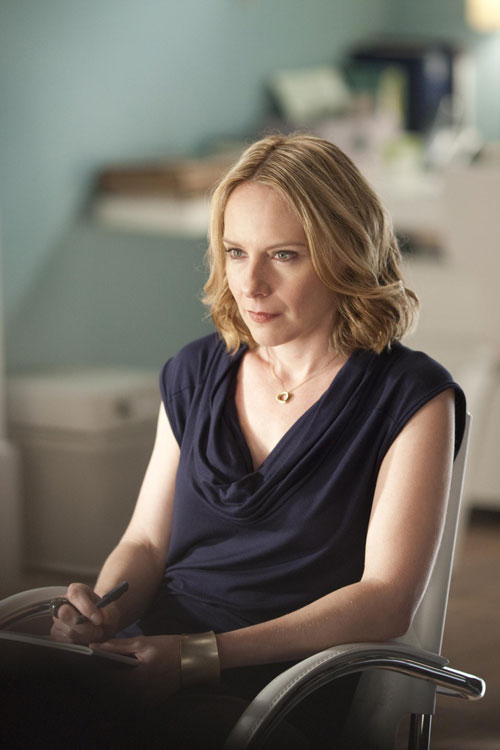 Just when you thought there was no one better to square off with Gabriel Byrne as psychotherapist Paul Weston than the formidable Dianne Wiest, who played his analyst for the past two seasons on the addictive HBO series In Treatment, along comes Season Three with Amy Ryan.

And once again, this project has topped itself.

Ryan plays Adele, Paul's end-of-the week analyst and foil, who at first glance seemed perhaps too young and fresh-faced for the task -- but quickly took on him, his patients' issues of the week and his 30 year plus roster of mommy/mentor/tortured Irish issues. She's pitch perfect in a completely new way and knows just how to handle him.

Like another actor I've written about here, Patricia Clarkson, Amy Ryan is a star but not a celebrity - an artist with such a startling intelligence and mercurial range that the match-up with the brooding and powerful Byrne seems as logical and effortless as her role as soul-mate to the awkward but equally complicated Michael Scott on The Office. The breadth of her talent deepens when you remember her as the world's skankiest mom in Gone, Baby, Gone . ("It's hahd being a motha!")

She more than rises to this new challenge.

This season began with Paul coming to Adeleonly to get a refill for his Ambien. After an electric first session when she both gets him and gets to him, he now returns every Friday to give the best of his worst. While demonstrating the finest qualities of a therapist Monday through Thursday - deeply caring, observant, benevolent and wise - Paul comes to Adele (as he did to Weist's Gina) often in a rage - harsh, condescending, duplicitous and game-playing - basically giving credence to the fact that doctors are the worst patients ever and shrinks, well...

Dan Futterman, who along with his wife Anya Epstein is In Treatment's executive producer, show-runner and writer, talked to me about the search to replace Wiest, whose storyline had run it's tumultuous course.

"We were looking for an actress who had both a toughness and intelligence and a beauty about her and those three qualities are not so easy to find," said Futterman, "Amy has all those things." He added, "She also a real quietness and ability to convey an enormous amount with her silence - you can't teach to an actor, you can't ask that of an actor -- you have it or you don't."

I recently asked Ryan her about her role on the show.

NDP: One of the challenges of this role both as your character Adele and you as an actor is the comparison to Gina Toll/Dianne Weist - how did this plays into your preparation for this part - one in which you really need to confront and even replace her influence and power over Paul and her status in the show itself?

Amy Ryan: It's fruitless to start worrying about any comparisons between myself and Dianne Weist. That's a losing battle. I respectfully lay down the gauntlet on that one.

I am aware that fans of Dianne will miss her on the show. I am also certain that fans of the show will be excited by the new direction that Paul faces. The writer's design for Adele is that she is excellent at her job. In many ways, far more professional than Gina Toll. That difference was exciting to me. Paul wrongly judges Adele at first glance so there's lots of conflict.

In terms of preparation for the part, I asked tons of questions to our writers, Danny and Anya as my director/producer Paris Barclay. Also, I brought my own experience as a patient and my friends experiences.

After that, the most important factor was listening. Truly listening and having a good poker face. Knowing when to show a reaction and knowing when not too.

NDP: Along these same lines of duality as 'therapist' and actor - you are facing the formidable talents of both Paul Weston the therapist and Gabriel Byrne the actor in your sessions with him - can you elaborate on what you bring to this one-on-one match-up?

Amy Ryan: Throughout the scripts, Danny and Anya wrote so many wonderful moments when the characters one up each other. It felt good to play those moments. It supplied lots of confidence to the character and me as an actor.

How to keep up with Gabriel Byrne? I thought it best to take his lead. He obviously knew the show on such a deeper level than I did. He knew so well how to navigate through 25 pages of dialogue in two days of filming. He is such a generous actor. He shared lots of tips and techniques.

I suppose what I brought to it, was the unknown for him. We never met before. He was getting to know me in the same time frame our characters were.

Also, having "Ryan" as a last name is welcoming to someone named "Byrne." There's a natural shared storytelling on set. Friends and places in common.

NDP: One of the themes of the show is that therapists play a role in a similar way that actors do - can you talk about how this intensely intelligent character requires the same kind of strategies you use as an actor?

Amy Ryan:There are definitely similarities. The detective work on human behavior: trying to read a person, discovering why they say the things they choose to say. How their body language supports or defies their language. It's all a part of it. As an actor I would mostly do this work before I start filming but lots of it was discovering it in the moment. The challenge was making those choices for the character I play while discovering how and why Paul behaves the way he does. Mostly, that was supported by the writing. I relied heavily on the script.

NDP: In Treatment pays tribute to three art forms - acting, writing and therapy. As someone actively participating in two of these three crafts on this show can you talk about how In Treatment successfully brings this together - i.e., why the show is so popular?

Amy Ryan: I suppose it is the perfect storm of the three art forms you mention. The show gives air, space and time to let 25 pages play out. No matter what the show is, if there is not a compelling story, there's not much else to keep an audiences attention for that long. I do think the great success of that show is the writing and of course Gabriel's mesmerizing performance. It sounds silly, but it truly is not easy to sit and listen and make it active. To make it new and alive. Especially when the camera is so close and there aren't other visuals or action to help.

NDP: In preparing for this role did you yourself meet with therapists or go through any kind of analysis yourself?

Amy Ryan: No. Most of the time not on set was spent learning lines for the next episode!

NDP: Here's my total fan question - how much fun is this show - what's it like?

Amy Ryan: It's a huge gift as an actor. However, at the end of a 12 hour day your ass really really hurts.

Fans of the show hope Ryan manages to stay in that chair...