In Glamour's August 2015 issue, Schumer talks about feminism and some awesome hook-up advice. In true Amy fashion, the comedian's recent comments make us laugh while also reminding everyone how subtle sexism makes for bad sex.

Schumer said that when it comes to sex, a woman's orgasm should never be optional. “Do what you feel you want to do while also considering how you’ll feel the next day. Don’t not have an orgasm," she told Glamour. "Make sure he knows that you’re entitled to an orgasm. I like to say it. I’ll be like, ‘Hey, there are two people here.’ I’ll be like, ‘Oh my God, have you met my clit?’ Don’t be self-conscious.” It's never too late to make new friends -- even when that friend is a woman's clitoris. 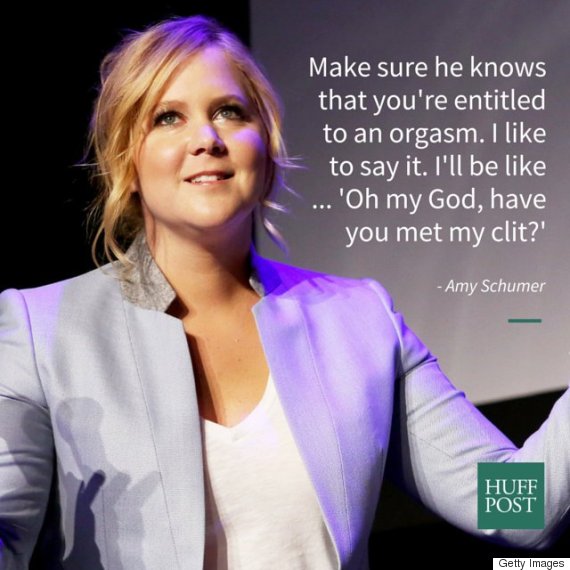 When asked about her now-infamous Glamour U.K. speech where she said “I’m probably like 160 pounds right now, and I can catch a d**k" whenever I want," Schumer responded that there's a huge (sexist) difference between women and men discussing their sex lives. “If a guy was like, ‘I can get pussy whenever I want,’ that guy would be a dickhead," she said. "But to deny that there’s a major difference is ridiculous."

"For women, we’re taught to eat less until we disappear. And trained to believe that if you don’t look like everyone else, then you’re unlovable," Schumer told Glamour. "And men are not trained that way. Men can look like whatever and still date a supermodel. I’m proud of what I said. I think it’s good to see somebody saying: I have a belly. And I have cellulite. And I still deserve love. And to catch the old D. And to not apologize.”

Head over to Glamour to read the rest of Schumer's interview.

13 Amy Schumer Quotes That Make Us Proud To Be Women