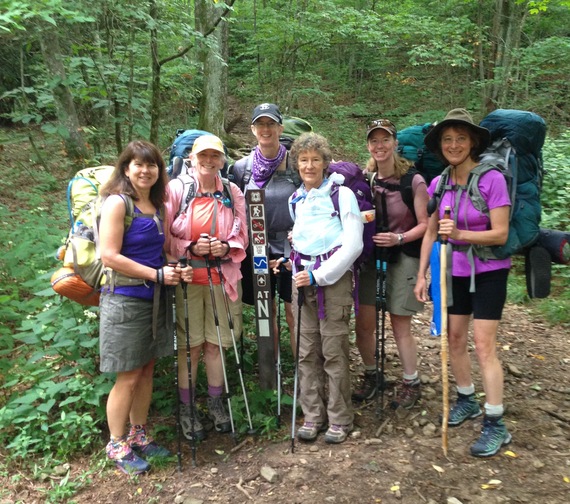 Six of us were ready to go on a big adventure. 8 days on the Appalachian Trail from Deep Gap, GA to Fontana, NC. Five experienced hikers and backpackers and me. The five other women were fit, fun, interesting and perfectly geared with the latest and greatest and lightest and snazziest gear. Leanne, a nurse, vowed she would be last every day while I insisted that the last spot was mine. Julie, wearing a hiking skirt and having freeze-dried all of her own meals, looked ready to dance her way across the trail. Becky, whose training included traveling to India for work and then sitting at a computer for 15 hours a day declared she would train on the trail, and I knew her worst day might be my best. Jill, an ice hockey and hiking buddy of Becky's was tall, lean, fit and ready to go. Elizabeth Ann, who is so light she could probably sail over the trail, packed the lightest carrying only 25 pounds, including her food, clothing and shelter.

And then there was me. I swear I trained, but only the week before because running a ukulele festival and playing banjo and touring and performing folk music is not particularly good training for the A.T. A week before departure, I started training on a North Carolina mountain loop. The hills were very steep in both directions. I did 6 miles each of the first 2 days, then 9 miles the third day, then 6 miles the 4th, each with a half-full backpack. On day five I had an ache in my chin that kept me up the night before. My chin was puffy and touching it made me scream. So, I found a local dentist who squeezed me into his full schedule-a guitar player. He discovered I needed one or two root canals and set me up with another dentist an hour away for an appointment later that day.

Still training in my mind, I waited 3 hours until dentist 2 had time to see me. A half hour later I had 2 options. Root canal on front tooth, or extraction. I've heard the saying before "I'd rather have a root canal", and decided it was better than no front tooth. It's hard to sing with no front tooth.

So, day 6 of training was another hour-long trip to the dentist to have the root canal. Two and a half hours later, it was announced to be successful and my mouth was stuffed with gauze, antibiotics in hand and enough Novocain to nix conversation for the rest of the day. In my mind, I was still training.

Day 7 of training was an all day drive to the Charlotte airport to pick up Becky and meet up with the troop in Marble, NC. We had a slumber party on the floor of Jill's brother's house. On day one of the hike, his family piled us all into a large car and an hour later, we were dropped off at the trailhead. The trek began.

It didn't take long for me to prove that I would always be last, and Becky, a generous and terrific friend, hung with me, never making me feel bad about being a slowpoke. We went up, down, up, down, steep up, up and up, steep down, down and down. We walked through fabulous rhododendron tunnels and saw pink and orange mushrooms. We marveled at trees growing out of rocks and trees with flowers poking out of their sides. The last 2 miles were steep up and up until we finally saw the sign for the shelter. We headed up towards the shelter and suddenly stopped at the same time. The faster hikers had stopped there to wait for us and gave us a "silent" sign with 1 finger over their lips.

We could hear something odd, different. It was like a thousand pitter-pats all at once. We could not figure out what that sound was. It seemed it had to be more than one animal, but very small. We agreed to walk silently and around the next bend an amazing sight stopped us in our tracks. At the top of this hill, we were greeted by a herd of mice. They must have been 200 across, touching side by side across the trail, all looking in our direction. For a moment we stared at them and they stared at us. That was 400 eyes on our 12. We took one tiny step forward in formation. The 200 mice moved forward one step in a perfect line. Then, to our amazement, another 200 mice appeared and crawled onto the backs of the first 200. It was no longer just a line, or a herd or even a wall of mice. It was an army of mice, prepared to protect their territory.

We reached into our packs and pockets and placed our hands carefully on our weapons. We were ready for ticks, bees, mosquitos, poison ivy, and even bears, but a herd of mice had not occurred to us. In a moment, we spread out and faced different directions into the woods to the sides of the trail and away from the shelter sign. At my signal, we threw a flurry of stuff as far into the woods as we could. Socks, crackers, cheese, cookies, peanuts, crumbs, m&m's and even beef jerky. Before we could blink, the mice scrambled and scampered into the woods after the goodies we had thrown. As soon as the path was clear, we hustled up the hill and declared the shelter to be ours. We set up two tents inside the shelter and two outside, figuring if the mice returned, they would not enter the tents, where we had posted NO MOUSE ENTRY signs.

When we awoke the next morning, we had indeed kept the mice out of our tents. As we started making noise, we heard a few mice scampering around. They vacated the coziness of our boots and wet socks, but for the most part, we had won the great battle of the great mouse herd. 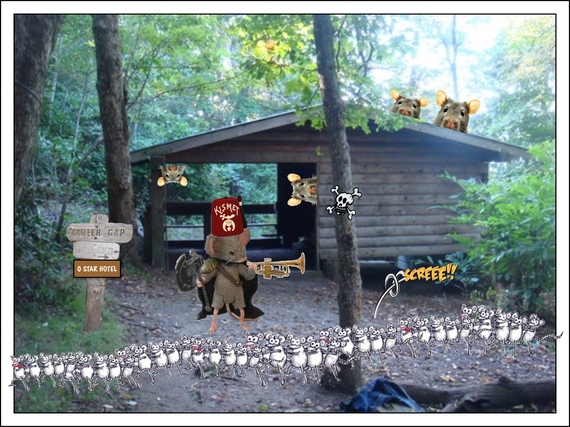