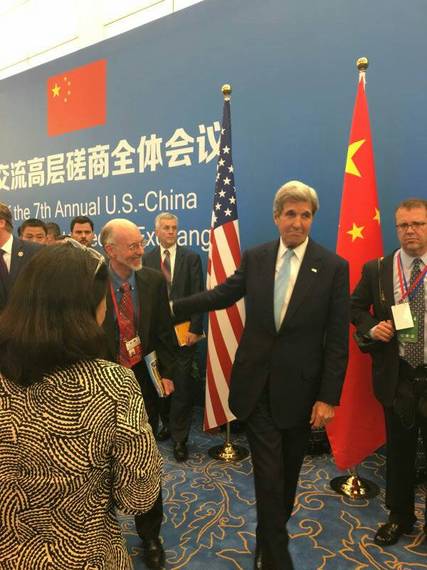 Sitting on an ivory silk-covered chair in the National Museum in Beijing in a grand hall filled with distinguished delegates and guests from the US and China, the silence was palpable. Everyone, including Secretary of State John Kerry and Vice Premier Lui Yandong, gazed upon Yale's a cappella group Spizzwinks, side by side with singers from Tsinghua University, as they thrust into a spirited rendition of Queen's "Somebody to Love." How many in the audience knew that the 70's British rocker Freddie Mercury wrote this song? How would the Chinese officials react? Nearby to my left was the inimitable basketball superstar Yao Ming. Travel weary, excited and disoriented, I thought: How did I get here? By happenstance, I was a US delegate for the day representing Sino-US Universities, joining sessions of the 7th annual US-China Consultation on People to People Exchange (CPE). After the performance, a beaming Secretary Kerry, a Yale alumnus, said he was "very comforted to know that "Can anybody find me someone to love" is still a question people are asking." Laughter all around.

The CPE began in 2010 under Secretary of State Hillary Clinton and then State Councilor Lui Landong to foster people to people exchange in sports, culture, science and technology, women's issues, health and education. The goal is simple: two great nations can learn from each other, opening vistas that neither could achieve alone. As Secretary of State Kerry said, "...it's human nature to fear the unknown. And for many years, as we know, people built up barriers between us. It is a welcome fact that education and the knowledge that comes with it are the greatest builders that there are of confidence and of trust." In just six years, President Obama's goal of "100,000 strong" US students studying in China has already been exceeded. Last year, President Obama and President Xi Jinping announced a goal of one million American students to learn Mandarin by 2020, a five-fold increase from today. Vice Premier Lui Landong shared that currently more than 300 million Chinese students are learning English.

Such success does not surprise me. The warmth and friendship between Secretary Kerry and Vice Premier Lui Landong was clear. Translators were not needed to see this. Likewise, Under Secretary Richard Stengel and Vice Minister of Education Hao Ping, co-Chairs at this meeting, have become friends over the years working together. Dr. Hao Ping has a special appreciation of American education, since he earned a graduate degree from the University of Hawaii. Friendship and mutual understanding is what diplomacy is all about. One of the best ways to foster this is through education, learning and growing together. China values American higher education with more than 300,000 of their citizens studying in the US. Several Sino-US campuses are emerging in China, where students can earn American college degrees on their own soil with English instruction and the same access to information that we take for granted. This is just the beginning.

My brief delegation status occurred a few days after attending the graduation of a Sino-US University. Each of those 187 graduates are pioneers in Sino-US relations, with the promise of becoming influential business and government leaders in China, fluent in English, emboldened with creativity and passion that a liberal arts college degree can bring. They are more than friends. They are family. When I shook their hands as they boldly crossed the stage at Commencement in Wenzhou (Zhejiang Province), I saw in their eyes the eyes of my own teenage children as they explore their own paths. I saw a glimpse of the future of two great nations that understand each other better, recognizing that working together is far better than working in isolation.

The 8th annual CPE is planned for next June, when we will have a new President and Secretary of State. China's leadership is committed to building Sino-US relations one citizen and one student at a time. My bet is on the lucky number eight, bringing prosperity. Whomever is elected President, I am confident that the momentum built over the last six years will continue. Our new President may reconsider global trade agreements or grapple with territorial disputes in the South China Sea, but the dividends of people to people exchange will be priceless. Working through issues as friends and families is much better than the alternative.

This article was first published in The Hill, Congress Blog.