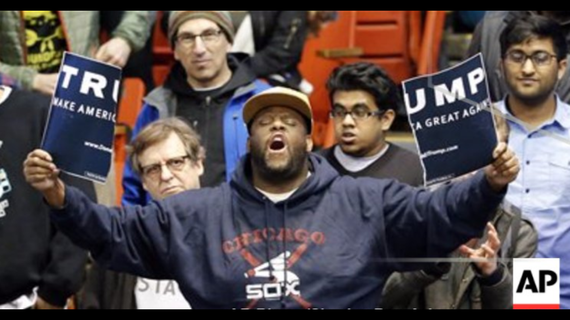 The Windy City's message was loud and clear: When you offend us, the repercussions make history.

Last Friday, Republican primary candidate and front-runner Donald Trump was called out on his devious BS, as thousands of protesters forced the cancellation of a scheduled rally. In its own contribution to making America great again, the City of broad shoulders shoved his national campaign tour of divisive fear mongering out of the city.

Chicago, when provoked, has an extensive resume of boldly reintroducing itself with a reminder of its right to protest vitriolic political rhetoric, and to further demand a civic engagement between political candidates and voters that focus more on the substance of our sustenance than the all-too-distracting sizzle of the circus.

Trump's political campaign strategy is the latest rendition of George Wallace's 1968 presidential nomination strategy that intentionally fanned flames of hate and terror, pitting one marginalized group against another, for his own political gain. As such, Wallace's strategy and its subsequent remixes have had a regressive impact on our country's ability to come together and solve problems affecting all of us, regardless of the group with which we choose to identify.

According to data from Public Policy Polling, nearly half of voting Republicans from the 2016 South Carolina primary wanted undocumented immigrants deported immediately. 30 percent supported barring gays and lesbians from entering the country and believe the Japanese internment during World War II was a good idea. 78 percent percent thought that whites were a superior race. 38 percent percent wished the south would have won the Civil War.

In true dog whistle form, Trump speaks a coded (and not so coded) language that sends a xenophobic message about marginalized groups to one population, silent on one level, but clearly heard and understood (wink-wink) on another. A tried and successful approach that continues to incite division to win elections.

It distracts us from seeing our commonality of cause and effect by wrongly affixing blame for our struggles to each other when, in reality, we are all a collective of victims. Victims of a brilliantly deceitful strategy that obscures and protects the real culprits.

Character matters. The Trump campaign's strategy begs to question whether the candidate's thin sense of morality makes him fit to hold the highest office in the land and have the necessary judgement to perform competently. Yes, Trump has a constitutional right to say what he wants, but that doesn't make it morally right to say. Especially if his statements are intended to incite division by appealing to the fears and frustrations of his electorate base.

It's a frightening American commentary when a presidential candidate who denies the violence taking place at his rallies, who makes disparaging comments about women, immigrants, African Americans and Muslims, who refuses to repudiate the Ku Klux Klan, who continues to blame the media for exacerbating the tension, who enlists surrogates who refer to the efforts of people that utilize their constitutional right to protest as "punk-ass thuggery", and who offers to pay the legal fees of violent supporters, is perceived, by a considerable portion of the electorate, to be presidential. He seems to be a demagogue who is making America hate again, rather than be great again.

Sadly, as Trump's campaign continues to inspire and expand his base, Wallace's legacy is preserved and extended.

Proudly, not in Chicago.

The Trump campaign incited Chicago to affirm its democracy. Thousands of young activists in attendance stood firm in asserting their worth, courageous in their pursuit to be respected, and diverse as the melting pot this country reflects.

Chicago is immune to the pejorative accusations of violent political protests, with the understanding that "violence only erupts" when the marginalized swing back. "Violence" didn't erupt when a Trump supporter sucker-punched a protester being escorted from a rally by police. "Violence" didn't erupt when a female protester was bounced like a human pin-ball by a group of male Trump supporters.

Chicago isn't new to this, it's true to this.

When a historical lens of race, poverty and oppression is applied, Chicago is ground zero with its extensive history of activism, an expansive list of events and institutions coming about as a result, and an impressive list of alums who cut their activist teeth in these streets and have made significant contributions for the betterment of society. Think: The Chicago Defender, Saul Alinsky, Dr. King's Chicago legacy, the 1968 Democratic National Convention, Jesse Jackson and Rainbow PUSH, The Nation of Islam, Jewish Federation, Harold Washington, Bernie Sanders, President Barack Obama, and the myriad of community development and faith based organizations that have sprung up over the last 60 years as a response to local community xenophobia and government oppression.

Ironically, a Trump Republican nomination win, may create the political revolution democratic candidate Bernie Sanders has been talking about all along. Donald Trump may be the best thing that ever happened to the American people's political revolution, to the extent that we, the people, because of him, ignited it.

Chi-town stood up. Who's next?