That awkward moment when people think you and your dad are married.

My parents and I just got back from a cruise to the Bahamas and two people on separate occasions asked me if I was my dad's wife. What's more, a Peruvian ship worker also asked us, "Is that your daughter? But she looks like a China woman!" And a presumably respectful Southern gentleman asked me, after seeing me with my parents, if I was "like a Cambodian victim of sex trafficking?"

That one was really the cherry on top of my Piña Colada.

These questions are all particularly anathema to me because I actually write for a living about the global subjugation of women. So I am very certain that I'm not my dad's mail-order Asian bride and that my mom is not my sex trafficking captor.

My parents, who are 61 years old, white and live in Iowa, adopted me from Seoul, South Korea after I was left on the doorsteps of an orphanage when I was a day old. I'm not a unique case -- after the Korean War ended in 1953, many moms in South Korea abandoned their newborns in a society that would ostracize an unwed woman who had a child.

There are complex stereotypes regarding race, gender, prejudice, and privilege that arise when people ask us whether we are married -- namely the inculcated archetype regarding the "creepy" older white man man and the younger, submissive Asian woman.

Society's view on this is simply not something I want to be reminded of when I'm hanging out with my dad.

I'm not saying I'm free of my own biases or I adhere to some supreme level of moral rectitude, but since it's National Adoption Awareness Month (granted, it's domestic-focused) and this type of prejudice is not endemic to a cruise ship but rather something that happens to many Asian adoptees, I thought I'd make a small request. I think it'd be best, guys, if we could stop labeling and perpetuating stereotypes because, well, just look at what happens: awkwardness for everyone involved. 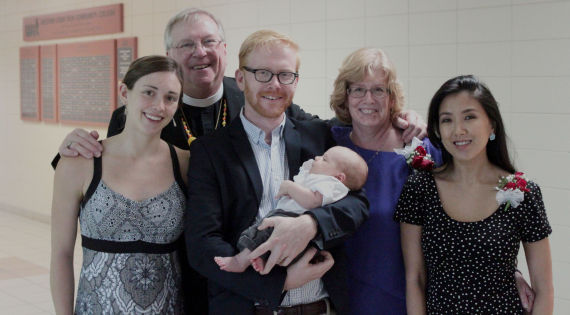 My sister-in-law, dad, brother, cutest nephew ever, mom, me.

Now, it might seem easy to attribute these statements to the "type" of people who go on this "type" of vacation.

A cruise is, of course, probably about the least authentic way to travel. There is no farm-to-table fare, no architecture steeped in history. The completely curated activities and cheesy over-the-top theatrical tone of a cruise relegates it to steerage in the ranks of traveling. Fine, but it is a fun vacation for families. Plus, I was veritably unable to check email for a week, so I had a great time.

But I will say this cruise I went on was not prototypical. On board, we mostly hung out in an unassuming whiskey lounge with dark wood and went to shows and a classy-enough art auction. The cruise left from a port in New York and was a week-long home to an eclectic mix of socioeconomic statuses and races. Old-money-Upper-East-Siders complained about how the food was "teahrible." Russian families three generations strong ate Japanese teppanyaki with precocious daughters looking squarely in their parent's eyes telling them "Nyet" (No). Italian women loudly compared their commutes from Staten Island into the city. And a largely Filipino and Peruvian boat crew told me about the new food they ate on the boat -- like spaghetti carbonara.

But as I describe these passengers above, it's clear I'm just as prone to stereotyping others as anyone else is. And these subtle, nuanced observations can be more insidious than overtly offensive statements such as racial slurs -- which are vivid and salient in their wrongness. These more latent forms of bias can slowly build undetected. Creating awareness and actively trying not to do this takes work.

To be sure, this post isn't some culturally elitist screed meant to elicit comments like "'Murica, fu*k yeah." This is no uproarious David Foster Wallace piece, "A Supposedly Fun Thing I'll Never Do Again," in which he derisively mocks the low-brow nature of a cruise he took with statements such as, "I have seen 500 upscale Americans dance the Electric Slide. I have seen sunsets that looked computer-enhanced. I have (very briefly) joined a conga line."

All of this caused him to basically have an existential crisis. I guess I can be thankful all that didn't happen to me.

I am actually pointing out that on this racially diverse boat, people from all over the world projected stereotypes toward Asian women and white men.

Ever one to lighten the mood, my hilarious, intelligent mom said, "Well, what if you and I are an item, and Dad is just the beard?"

But that would simply never happen because that's not a social construct society has formed a consensus on.

When I was younger, I wanted to go places strictly with my dad, because he had brown hair and I thought I resembled him more than my strawberry-blonde mom. As a Korean adoptee in a homogenous Midwest community, I thought I blended in more this way. Now, the reality is that the opposite is true.

The cruise isn't the first time something like this has happened. A few years ago, I lived with my parents outside of Chicago when I was in grad school for journalism. My dad and I were at some event and I was producing a radio segment, when a local politician -- you know, those public figures in whom we place all our trust -- asked if my dad and I were married. I remember neighbors asking, too. It's just uncomfortable.

But beyond being uncomfortable, these questions are also distressing because they bring up issues from childhood that have shaped who you are. It's a reminder of feeling like an outsider and wanting to fit in. And it's a reminder that you probably overcompensate because of it. It's a reminder that growing up and not seeing anyone who looks like you can make you dislike or be disinterested in your own ethnicity. It's a reminder that you realized -- early on in life -- that the world is such an imperfect place that a mother could be forced to give up her child. And that is all personally painful to think about.

But it all also probably made you more of a soul-searcher.

Nicole Soojung recently wrote for Bitch Magazine about whether race should be discussed among adoptees, pointing out that some parents opt for a "colorblind" approach. She said that a mother who adopted a son told her: "I don't see my son's color. Race is just not an issue for us."

But race in relation to adoption is an issue, precisely for reasons like what happened on our cruise. And apparently it's not an issue only families of adopted kids should talk about -- it's something everybody should.

So big picture, let's try not to uphold prejudices and stereotypes because look what happens -- people ask you if you're married to your dad.