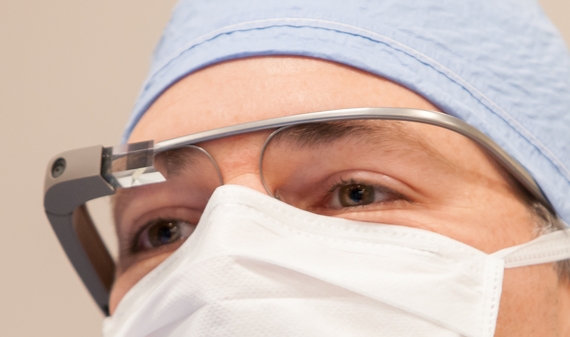 Me: An interventional cardiologist with a penchant for mobile medical technology.
Her: Sleek, smart, alluring and came with an amazing pedigree.

She was actually Google Glass, and her heads-up display, 5MP camera, telephone, text, email, social media -- capabilities all performed by voice command came in a lightweight package. Predictably, she was nearly impossible to get.

I aggressively leveraged my position on Google's Healthcare Advisory Board to get close and lobbied to become one of the lucky first 1500 Explorers. We first met at a private loft in Chelsea, learning about each other while having drinks with the NYC skyline in our background and a world of potential in our future. I fantasized about Glass choosing my stent sizes, showing me my patients' vital signs with just a slight upward gaze, video-conferencing me with referring doctors while we worked on hearts together.

I took the elevator down to the street level and the throngs of people below, shielding Glass from the harsh outside world -- looking over my shoulder to make sure no one was threatening us. I read about Glass in the forums and on the website that bore her name. I stayed up late talking about what I could do in cardiovascular disease with Glass. I was smitten. As I began to get to know Glass more intimately, I worried that she was a bit clumsy in her functionality, and although the press was still madly in love with her, I felt like I knew a dark secret that I dared not share. After all, I was granted a gift to spend time with Glass -- and I wasn't about to ruin that relationship.

Maybe it was me, not her. So I continued to make it work, and we even went for professional help: I read about Glass' inner workings and consulted experts ("Glass Guides") on what other people had discovered. Sure, we had some good times -- Glass and I were on the local TV news together, and then our picture made it into the papers. We even had a great ski weekend in Vermont together. 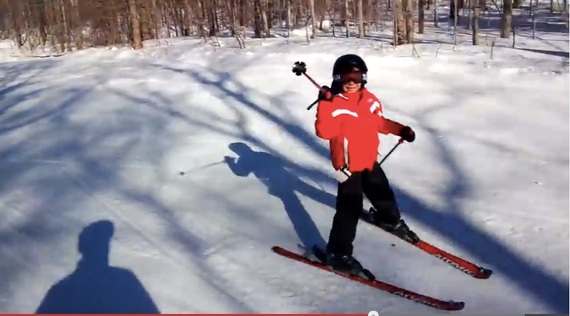 But I was not the only one with misgivings. As more people began to experiment with Glass, one could sense a shift in opinion about Glass and the criticisms were growing louder. I had seen the signs, and now my worst fears were being realized. The concerns I had about Glass' behavior were validated. Eventually, like so many other relationships, we began to see less of each other. The novelty was wearing thin and the problems, as illustrated below, were mounting. I no longer held Glass with the same reverence I once had. The specifics of our time together are outlined below and while I may find happiness with another, I will not soon forget my time with Glass.

Communication breakdown. One of the greatest potentials for Glass in a medical setting is the ability for your audience to visualize what you are seeing, while you are seeing it, and engage with you in real time. It's a game-changing technology that does not currently exist without significant audiovisual expenditure and support. From a teaching perspective, it removes the need for a handful of students, residents, and fellows to be crammed against the surgical field, on tippy toes, trying to catch a glimpse of what the operator is doing. With Glass' purported ability to transmit live video conferencing, observers could watch in the comfort of their classroom or call room and have better eyes on the object of interest than if they were there in person. They would also be able to ask questions of the operator or simply listen to s/he as they instruct on anatomy and tips to performing the procedure. One man, with one set of Google Glass could theoretically instruct dozens, if not thousands, as long as both parties had an Internet connection.

Video conferencing could also be used by the Glass-wearer to obtain a second opinion from a far-away consultant who has more experience. By allowing the consulting physician/surgeon to visualize the operative field or pathology slide or ocular exam directly, a recommendation could be made from another continent. In addition, there are myriad possibilities for health care in underserved areas where one health care professional using Glass could seek consultations from experts who could visualize the patient, their exam findings, or their radiographic images.

But alas, the WiFi connection was difficult to sustain in a leaded operating room, and even with robust WiFi, would not support video conferencing for any extended period of time. As reporters requested demonstrations and observation pieces, we crossed our fingers and did our best to show its immense potential, which was undoubted, but far greater than its actual utility. And finally, one week before we were planning (for months) to broadcast a live case through Glass, Google pulled the video conferencing feature off the device completely. Boom. Just like that -- and pretty much without explanation, no more video-conferencing. It was a relief to not have to wish and pray that the connection would run smoothly, and we would show Glass in a positive light, but a huge disappointment as we had spent weeks trying to make it run smoothly enough to entertain a live audience. Third-party apps for Glass, e.g. LiveStream, tried their best to compensate but in the end, there was no easy way to make this revolutionary technology succeed.

The "Coolness" Factor. Not too long into America's fascination with Glass, articles began to pop up about Glassholes who flaunted their head-mounted computer in coffee shops and retail stores. These articles inevitably included privacy experts railing against the potential of being recorded without knowledge and the catastrophic consequences this could have on society as a whole. Anecdotes about surly bartenders refusing service to Glass users and crowds berating wearers spooked the lay population just enough to give pause. Maybe they did not want to be that guy -- the one with the computer on their face. The Daily Show's mockery of Glass was a snarky, but pointed blow to its coolness factor, when it made it painfully obvious that most everything you could do with your face computer, you could also do with that phone in your hand -- and it did not cost $1500. The relative appeal to the mass population was made clear when the public release was a dud. I felt myself pulling further away from Glass.

Privacy issues. Public opinion notwithstanding, a heads-up display, wearable computer, with voice-controlled functionality still had immense potential in the health care realm. But medical institutions face seemingly insurmountable privacy obstacles. The Health Information Patient Privacy Act (HIPPA) would not tolerate any health care provider using Glass in the hospital without informed consent. Furthermore, there was no clear explanation of how and where images taken with Glass eventually were stored. And finally, other patients and their family members are not confined to their rooms and they may not want to be filmed. Acute care situations (trauma, emergency medicine, heart attacks) in which Glass could potentially shine are unpredictable and there is neither time nor opportunity to pause and obtain consent for the filming of a patient over an insecure network. In order for a live-streaming device to be used in these scenarios, the device would have to run over a health-care-specific, password-protected, encrypted network or HIPPA laws may have to change significantly.

Breaking Up Is Hard to Do. Several properties, mostly technical, eventually destroyed our relationship. Short battery life, a sidearm CPU that would get uncomfortably hot, and most concerning for any relationship, difficulties maintaining my... connection. The hallmark of any good device, um, partner, is that they improve your life more than they hinder it. When people asked me how it was going, I would lie and say everything was great -- but I knew it wasn't. There were issues and I did not know how to solve them. It was sad but I was being honest with myself -- I began to read (and silently agree with) the slew of negative reviews as I felt it justified my own hardships with Glass. There is no doubt that Glass and its future progeny have immense upside in medical treatment and education. This is borne out by numerous opinion pieces and even a smattering of peer-reviewed journal articles demonstrating its utility. Glass, and its capabilities, captured the imagination of a nation -- if not a whole generation -- and has never failed to impress my medical colleagues with its potential. But at least for now, the thoughts of what could be are far more tantalizing than the reality of what is.