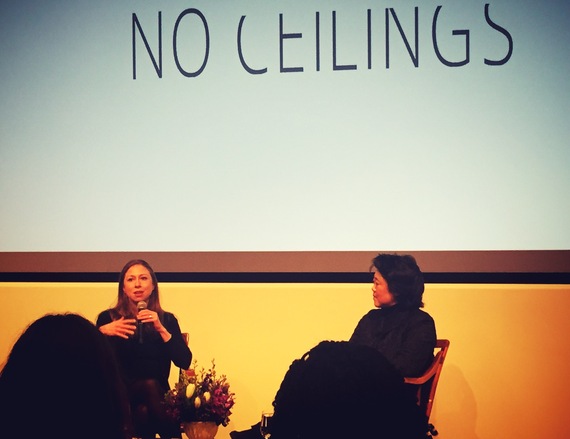 "There is no greater pillar of stability than a strong, free and educated woman," Angelina Jolie said in June at the biannual African Union Summit, "and there is no more inspiring role model than a man who respects and cherishes women and champions their leadership." As Chelsea Clinton, herself an advocate on this issue, visited Harvard last semester, we wanted to reflect on the insights that she had shared with students.

Clinton's goal is to advance the full participation of women and girls around the world, which she currently pursues as part of her work for No Ceilings, a project funded by the Clinton Foundation, the World Bank and Facebook. During the course of her fireside chat, when asked how she would define success in regards to that goal, her answer was simple. In her words, success is made when any girl anywhere in the world can do whatever she wants to do.

"No woman should suffer for her gender," Clinton began. She acknowledged that progress had been made in the fight for gender equity. More women are graduating from universities than men do. In other areas, however, there is still progress to be made. For example, many women die every day from preventable deaths such as maternal death. But she remained optimistic. "In the history of the world there has never been a better time to be born female," she noted.

Clinton told a story of her grandmother, one of her strongest role models. Her grandmother was was abandoned at age 8, but still finished high school. In Clinton's memory, her grandmother created a home full of possibilities. She empowered her daughter and grand daughter by trying to expose her to as many things as possible.

One could easily tell that Clinton deeply cared about the issues that she is fighting for. She admitted that creating change can be hard. It is her goal and understanding that for there to be true progress, other women need to be empowered. For that reason she always strives towards getting new people to the table. For example, the reports that are published by the Clinton Foundation are made available in six languages and multiple formats.

Clinton stressed that men can help in this effort. First, they can create a safe workspace for women, in which women feel comfortable to talk about whatever they want to talk about. Second, men need to appreciate the values of women. For example, when a woman delivers a baby, men need to be more understanding of maternity leave. Third, men can empower women to play a larger role in the political discourse.

When I asked her how she would prepare a 12-year-old boy or girl for the future, she said that she would first listen to the concerns of the child. She would try to understand what makes the child angry. And lastly she would encourage the child in a constructive way that it is possible to change the system.

Clinton stressed that we should focus on working on solvable problems. "We need to do a better job at doing what's already working," she stressed. But she also noted that any solution must entail a collaborative effort. "Nothing happens in a solitary sense," she said. Finally she encouraged students to find what they care about and then find the right partners to take on the challenge.

This piece has been originally published at The Law Record, the student newspaper of the Harvard Law School.