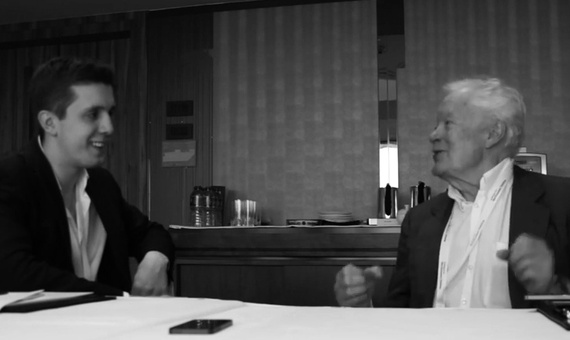 I interviewed Doug Carmichael at the Institute of New Economic Thinking's annual conference in Hong Kong. He is one of the Institute's strategy consultants and a fascinating and accomplished man.

The conversation talks of making your own judgment, appreciating the ordinary things in life and showing vulnerability. We began our conversation by questioning the motto of the conference.

Patrick Daniel: Are we changing the guard?

Doug Carmichael: The fascinating thing about changing the guard, if you look at Buckingham Palace is that you want the new guard to be exactly like the old guard. The same habits, the same posture, the same cloth -- nothing is different. So changing the guard could be easier trying to reproduce what we already have or to actually change it and of course putting a question mark means someone thinks it is a question. So it could be either one or the other. It is a very strange metaphor. Guard what are we guarding? A pot of gold at Fort Knox? The Queen? I noticed the people don't have guards.

Daniel: Is there something that you believe that you think very few people agree with you on? Some sort of truth?

Carmichael: Well, if we take the session that we just had, one of the things, there was nothing about the development of the person except as a resource to the economy. And that is actually quite bizarre and people go along with it. Isn't human capital another word for slavery? What are some questions that nobody is asking? What are some issues that should be highlighted? One would be: can you run a society without elites? Probably not. If you have to have them, how do you select them and keep them from hurting the rest of us? The word religion. The idea that there is religion and then there is science is wrong. Science is another religion. Economics is another religion. So we can be more self-conscious about that and what choices to make. We know that the sun will burn out and we will all die 5 billion years from now. But it already makes us nervous. And science is a funny thing because it led us to that kind of knowledge. What if we got up and we thought about poetry and we talked to people about poetry?

Daniel: Is that something that inspires you personally -- poetry?

Daniel: Are there any other sources that inspire you?

Carmichael: I love ordinary people. Out on the walk the other night there is this young couple. And they said: "Would you take our picture?" And they were so sincere. They really wanted to take that picture. And then we talked for a while. I love things like that.

Carmichael: I did not say understand. Just be with them. Listen. That is not enough to understand them.

Daniel: What are some stories or anecdotes that you can share that bear some lessons?

Carmichael: Life always has changes. You think you know what's happening. If I think back to college I didn't quite think like other people. I was more intuitive, less analytic. Everybody was doing this differential equations, and I am thinking. I can do that intuitively. I can see it geometrically. And then we got the multi dimensional equations, and I couldn't do it. But I think what is striking about that period when I was struggling a lot. I had a lot of understanding of the way things work. And I didn't pay enough attention to them. And almost all of them were right. Holding onto your personal judgment about things and be willing to explore and question and give them up. If you ask people their first impression of things they are usually very good and they brush it off. And they look for opinions.

Daniel: Is there a particular value or principle that has guided you in life?

Carmichael: Sure. Enjoyment of other people. And respect and curiosity.

Carmichael: I am 4 years old. I live in New York City and there is a huge snow storm. And the adults were talking about it. It was really dangerous because the fire trucks couldn't get down the street. So I thought that is terrible. Someone has to do something. They are talking but not doing anything about it. I waited until everybody was asleep and I got my little shovel from the beach, went outside and dug all the snow. I thought I'll do one car. I discovered water underneath, and I got fascinated.

Daniel: What was the best advice that you have been given?

Carmichael: I have to think about that a long time. Probably at one point I went through. I was living in an interesting place and some bad things had happen to me. And there was a guy, who was in his 70s and he said: "Don't worry. Things will happen that you never imagine." So I think that is true. Things change. And to be vulnerable. Lot of people don't like being vulnerable. But vulnerability is the only way you could know the world. And cultivating vulnerability, sensitivity, sensibility is really good.

Daniel: Thank you so much.