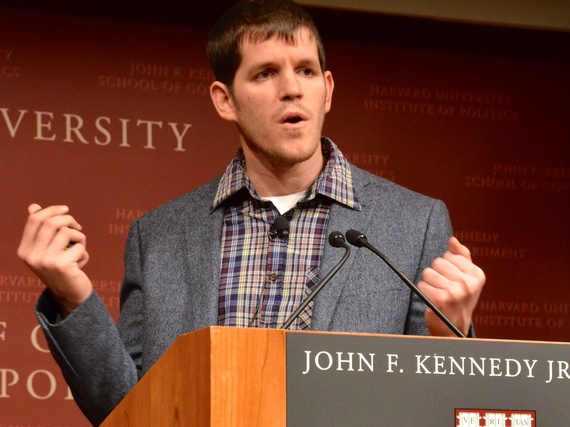 When Maggie Williams, Director of the Institute of Politics, introduced Brandon Stanton to the audience at the John F. Kennedy Jr. Forum this week, Stanton's story was celebrated as "an American tale of never giving up," and his blog as "a quintessence of America's great city."

Stanton is the author of a New York Times bestseller, with a Facebook page with 12 million followers and a partnership with the United Nations. But his story hasn't always been as glamorous as it was celebrated that night.

Indeed, he confided to students that it took him six years to graduate as a history major from the University of Georgia. Following graduation, he was hired as a bond trader in Chicago, a role from which he was fired three years later. His work ethic, however, and a budding idea changed his trajectory: a simple idea to photograph strangers and tell and share their story with the world.

He decided that it was important for him to be in control of his time. "The commitment I made to myself was 'I am going figure out a way to make enough money that I own my own time,'" he said. Then he asked himself what he would do if he was in control of his time. He would probably pursue his passion of photography, he told himself.

He moved to New York and began taking photographs of strangers that he met on the streets. He endured criticism from his friends and others, who didn't feel he was doing work. He skipped meals to make ends meet. It was a difficult period for Stanton. "There was a lot of loneliness and pain," he told students.

Despite the criticism, he stuck to his commitment. He realized that he wasn't the best photographer. He focused on telling stories. "I am a huge fan of biographies," he revealed. "What I'm always looking for is a story," he said. "I want a story I have never heard from anyone else."

In order to tell those stories, he learned how to approach strangers. He took a genuine liking to the person he talked to. And he never forgot that the story stood at the center of his work. He figured out what make stories powerful. "The most pivotal moments in people's lives revolve around emotions," Stanton noted, "Emotions make stories powerful."

Recently he photographed and featured Vidal Chastanet, a 13-year-old middle school student from Brownsville, Brooklyn, whom he helped raise $1 million to send students on tours of Harvard University. When President Barack Obama heard of the story, he invited the two to the White House.

At the Oval Office, President Obama shared his own story. He talked about his first, failed run for Congress in 1999. "For me to run and lose that bad, I was thinking maybe this isn't what I was cut out to do," Obama said. "I was 40 years old, and I'd invested a lot of time and effort into something that didn't seem to be working.

"But the thing that got me through that moment, and any other time that I've felt stuck, is to remind myself that it's about the work," Obama added. "Because if you're worrying about yourself  --  if you're thinking: 'Am I succeeding? Am I in the right position? Am I being appreciated?'  --  then you're going to end up feeling frustrated and stuck. But if you can keep it about the work, you'll always have a path."

It is these personal stories that make Humans of New York so powerful. Stanton's own story, he said, would not have been possible ten years ago. He encouraged students to follow their own creative ambitions and tell their own stories. "I show what anyone is capable of doing," he argued. "You know you are an artist if you appreciate beauty."

Above all, Stanton urged students not to wait for the perfect idea. He was a horrible photographer, he said. But that didn't matter. Stanton is not a photographer but a storyteller. He controlled his time, identified his passion, and applied it to a field that was unexplored. Instead of waiting for a silver bullet, he began taking photos every day. "If I had sat around and waited until I had an idea to be a successful photographer," he said, "I would still be in finance."

This was originally published at The Citizen, the student newspaper of the Harvard Kennedy School.