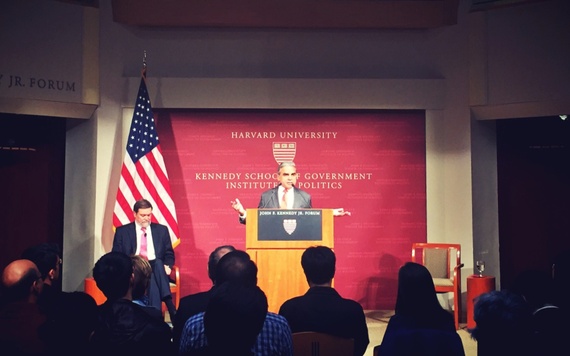 As part of the Albert H. Gordon lecture series, this year's speakers Kishore Mahbubani, dean and professor at the Lee Kuan Yew School of Public Policy talked about a new world when China surpasses the United States as the world's superpower. "It's time for the U.S. to think about a world in which it is No. 2 and how its interests will change," he told the audience of the JFK Jr. Forum.

After being introduced by Dean of the Harvard Kennedy School, David T. Ellwood, Mahbubani began telling three stories, of which the first one stood out. Mahbubani explained that the financial crisis marked an inflection point in US-China relations. Before the global financial crisis, the relationship was mutually interdependent. At the height of the crisis, the U.S. via quantitative easing was able to effectively print money. In order to promote global financial stability, China was asked to buy U.S. treasuries. From that point onward, however, the Chinese began to re-evaluate the relationship.

It was quite intriguing when Mahbubani shared China's main motivation over the coming years. "No more humilitation. That is the motiviation for China," he said. "The heart of aspirations of Chinese people is to move away from an era of humiliation to an era of being proud of what Chinese civilization can accomplish."

The problem, as he noted, is that the US is not prepared to be No. 2. "It is political suicide in America to say that the US is No. 2." Whenever he consumes US media on his visits to America, he feels cut off from the rest of the world. "The hard part here is to tell an American audience that the rest of the world often sees the U.S. acting in its own interest at the expense of global interest," he noted.

In other ways the US "has been unwise in undermining global institutions." For example, the UN, he complained, which was largely created by the US, is now undermined by US policies. Mahbubani, however, stressed that it is essential for the US to consider a world where it is no longer No. 1. The US must start to act more responsibly in the international arena in order to prevent China from acting recklessly in the future. More generally, this means that Western countries have to learn to understand non-Western perspectives.

When I asked him what millenials can do to contribute to what Henry Kissinger calls "a peaceful co-existence" between the two countries, he said that we live in a fundamentally different world now. He explained by telling a story of how the world is becoming smaller and smaller. Before the beginning of the end of Western predominance, we as a global community lived on 193 boats. Today, we live in 193 cabins but on the same boat. It is a whole new world. Millenials, he advised, need to convince older generations that interdependency between the two powers is far better than the risk of any escalating conflict.

Indeed historically, there have been many conflicts whenever the rising power clashes with the incumbent. In fact, he is surprised that that hasn't happened yet. Partially he attributes this to the way the US has demonstrated its wisdom by being sensitive on some issues. For example, the US is training the world's elite, which is a generous thing to do. Every year, 250,000 Chinese students study at American institutions. The fact that future leaders get to know each other, share similar values, and learn to respect each other's differences, is a remarkable contribution.

When he was questioned on whether China can sustain its growth in the future, he calculated that every Chinese only needs to have a quarter of the output of an American to overtake the US. To further strengthen his bullish case on China, he also mentioned how willing China is to learn from its mistakes. China's ascendancy over the US is only a question of time.

But, Mahbubani added, it will be a better world when China takes over. "Lets work towards a new world where we no longer have to use military," he said. China is not a country with a mission to dictate their values to other people. They don't believe that you have to emulate their beliefs.

That China will overtake the US as the world's largest economy is a given. It has four times as many people as the US after all. Whether or not China overtakes the US in other aspects has yet to be determined. Regardless, a world where both the Western and the Eastern part will learn from each other may indeed be a worthwhile thought for a better world.