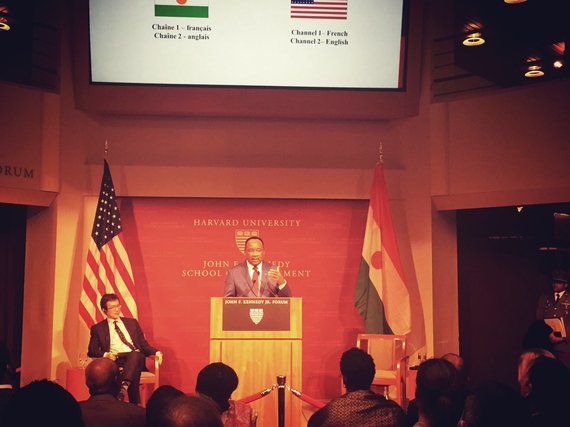 As the opening keynote for the African Development Conference, Mahamadou Issoufou, shared his vision on the future of Africa. His objective is no less than the rebirth of his country and the continued renaissance of Africa. "Africa must find its identity and pride again," he said.

The president's one-hour speech was sprinkled with literary quotations. He quoted Sun Tzu, who argued that defeat is always our own fault, whereas victory is always due to the opponent's error. And he cited HKS's favorite "Ask not what your country can do for you, but what you can do for your country."

Issoufou argued that the root cause of Africa's problems lies within Africa. Africans need to stop doubting themselves, he said. While colonization did interrupt the inner evolution of Africa, he noted that that Africans were part of the Atlantic slave trade. Blaming Africans, he argued, won't help Africa's future.

The political goal he expressed was for Africa to transition to democracy. Africa is still afflicted with corruption, civil wars, and border conflicts, but advanced democracies have not been built overnight.

Issoufou was optimistic that the trend toward democracy has begun. "The future of Africa is democracy," he emphasized. He was even more optimistic about his own country. He noted that Niger has experienced considerable economic improvements over the last few years and an upturn in good-governance indicators. For example, Niger has improved by thirty places between 2011 and 2013 in Transparency International's corruption metrics, despite the unfavorable regional environment of terrorist threats and drug trafficking.

The president also diagnosed the challenges for Niger and for Africa. "Division has always been the Achilles' heel of the continent," he said.

"Our survival depends on the capacity to unite." If Africa manages to develop industrially, he argued, it can get out of the era of colonization. If governance is improved, Africa can prosper. By improving the rule of law, Africa will attract more investment. Above all, Africa must project unity. One way to do that is to introduce a common currency. Issoufou was optimistic that, by 2020, most of West African countries would band together to create a common currency.

Interspersing these policy prescriptions with so many quotes from Western and Eastern philosophers, the president expressed a hope for Africa to have its own prominent philosophers, one day to be quoted by leaders and international dignitaries.

This piece was originally published at The Citizen, the student newspaper of the Harvard Kennedy School.