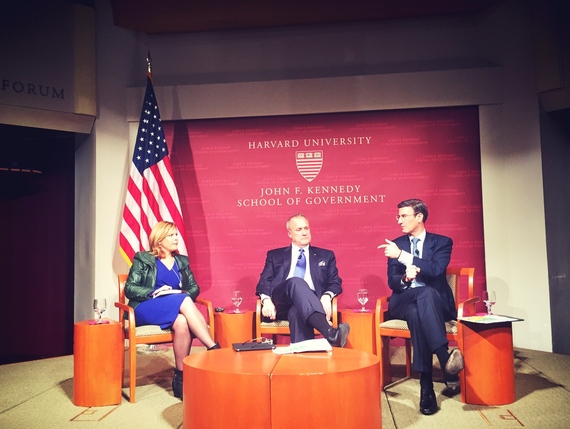 Everyone listened in excitedly as Nina Easton introduced the panelists to the audience that had gathered at the JFK Jr. Forum yesterday. As senior editor and columnist of Fortune Magazine and former resident fellow at the Institute of Politics, Easton experienced nothing short of an award-winning career with interviews of various luminaries including Hillary Clinton and President Obama. Her challenges morphed her ability to ask tough questions and stir the discussion into the right direction.

The discussion revolved around evidence-based and data-driven policymaking. The two panelists, Jim Nussle, President and CEO of the Credit Union National Association, and Peter Orszag, Vice Chairman of Citigroup, had just the right background to incite the stimulating discussion that the audience sought. Orszag and Nussle co-edited Moneyball for Government. Following the style of Michael Lewis' best-seller, Moneyball, they suggested ways on how governments can leverage big data analytics. "This is not a cook book, however," Nussle insisted, "it's more like a travel book"; it is a framework for thinking about how to do evidence-based and data driven budgeting and programming.

The problem these days is that policy makers do not pay enough attention to data, and how data can be used to make the relationship between citizens and government more acccountable. Another dilemma is that sometimes few constraints lead to bad outcomes. "If money is no constraint," said Jim Nussle, "you don't have to be creative." Nussle explained that the government ought to strive to do more with less. He went on to mention that citizens should force the government to make decisions based on evidence, "All of us as citizens should be saying, 'This is what we want. We actually want a government that bases itself on evidence.'"

Orszag suggested that resources need to be allocated towards government programs that work. People that lead programs which don't work often find themselves forced to continue them due to bias. Other ways to leverage big data is setting up a clearing house for all relevant studies, so that policy makers can easily tap into those studies and use them in a productive manner. Generally the solution is to digitize government more and offer citizens a more accountable government through big data. This is especially potent, said Orszag, because in light of ever decreasing acquisition cost of data, we really ought to be more aggressive in how we employ data to our benefit.

This idea means that policy makers need to be educated in a manner that equips them to take advantage of the rise of big data. "Nobody should graduate from a public policy school without having studied probability and science," Orszag stressed. By expanding education on those subjects, communities would be more data-driven and leaders can evaluate government programs to make them more effective.

In a world where there is very little innovation in our governments, it was refreshing to see evidence-based and data-driven solutions to make government more accountable. The information technology revolution that began at the beginning of the last century is just getting started, and it is important that future policy makers understand the world that we live in. It is time that they come to the realization that in order to succeed in our ever-changing world, they cannot neglect important subjects such as probability and statistics anymore. But it doesn't end there; it's just a good beginning.

According to Y Combinator, even within Silicon Valley, there are very few startups that write software for the government, making the government nothing more than a large customer with bad software. The "Moneyball" methodology would offer governments more prudence as to how money is spent and a gradual trust in how public funds are used.