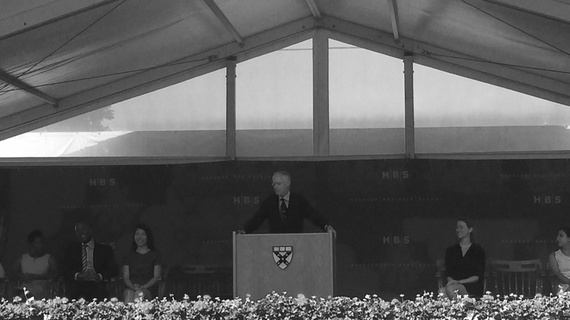 What is entrepreneurship? According to Professor Howard Stevenson, entrepreneurship is the pursuit of opportunity beyond current resources controlled. Last month, Scott Cook, co-founder of Intuit, spoke to the graduating class at HBS about his entrepreneurial journey. Intuit is known for having a startup culture and is consistently ranked as one of the most admired companies to work at. "You are among the luckiest people in the world," he told students, "you can choose the values and the purpose and the life that matters to you."

He talked about the things he wish he knew when he graduated from HBS. He invoked Taoism in his speech. "When you love someone deeply, you give strength," he said, "and when you are loved deeply you gain courage." Cook also credited his wife for his success. "Behind every successful enterprise, there is a supporting wife and surprised in-laws," he remarked. Cook shared three lessons with today's students about how he navigated his company through triumph and turmoil.

It took him many years to realize that it is often ourselves that we know the least. We are in fact the easiest person to fool. "We are a bundles of biases and behaviors," he explained, "The good news, however, is that these biases and behaviors are not fixed. You can change them. The most important skill you need is the ability to learn how to change and grow."

Cook's first piece of advice was how to change those biases and behavior. "Dig for feedback on yourself," he stressed. "You need to have the courage to ask for feedback," he said, "You need to learn how you can learn how to grow. It is important that you are going to be a life-long learner." In other words, you need to catch yourself making the same mistakes, and then deliberately teaching yourself to make a different decision, rather than reacting to the same old bias. He acknowledged that it is unnatural to ask for feedback, but he stressed how vital good feedback is for one's growth in life and work.

The second piece of advice was getting a coach. Cook said that you need to have someone that sees you work and whom you respect and listen to. The final piece of advice was to savor surprises, which he learned through his former HBS professor Kim Clark. Savoring surprises is about questioning how things are being done. "One shouldn't ignore the unexpected, as it is the richest source of innovation," he quoted Peter Drucker.

In addition, Cook shared how PayPal savored a surprise of their own. When PayPal's business model did not work in the beginning, they listened closely to the feedback of their users. One user suggested to build a money transfer service for power sellers on eBay. The founders listened and turned the feedback into a valuable product that became one of the building blocks for PayPal's success.