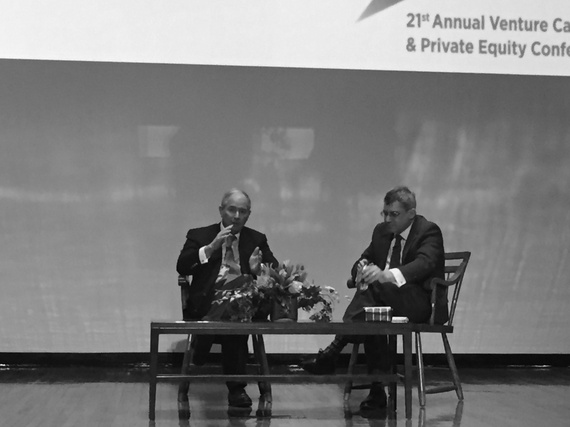 When Stephen A. Schwarzman, chairman and CEO of The Blackstone Group, visited Harvard this month, I felt inspired by his stories and the lessons that he shared with students. Schwarzman is known for having co-founded The Blackstone Group, a global private equity and financial advisory firm, alongside business partner Pete Peterson, former U.S. Secretary of Commerce. In 2007, Schwarzman was named as one of Time Magazine's 100 Most Influential People in the World.

I decided to share some of the insights of this billionaire entrepreneur and investor who has made such an indelible mark on Wall Street. In the morning he talked to students of Harvard's China Forum, and in the afternoon to students of Harvard Business School, his alma mater, from which he graduated in 1972.

The first part of Schwarzman's address at the Science Center, sponsored by Anbang Insurance Group, focused on the story of when he had first applied to Harvard College. Schwarzman was one of the unlucky few that found themselves on Harvard's waiting list, but rather than waiting for an outcome, he took matters into his own hands; he called the Dean of Harvard College.

Schwarzman recalled that he was nervous and sweaty when he first introduced himself, but the Dean was not to be persuaded and stated that none of the students that were put on the waiting list would be admitted that year. Schwarzman was disappointed to say the least, but the College's Dean remembered his unforeseen decision to make that call.

Many years after Schwarzman's success, Harvard College's now former Dean called Schwarzman, noting Schwarzman's memorable introduction, for not many prospective students had the boldness to contact the Dean directly. Amongst the many things they discussed, one that stood out the most to Schwarzman was the Dean's admission that Harvard hadn't made the right decision that day so many years ago.

During the second part of his talk, Schwarzman shared some of his insights on China and the U.S. relations with China. Schwarzman stated that "... historically, there has been a conflict when the rising power meets the incumbent," and further commended, "There is no country that can get things done [as quickly] as China." He observed that the Chinese can get very emotional when they felt insulted, and the West has behaved at times in an uninformed and biased way.

If young students from the West, however, can get exposed to Chinese cultural values, they will be more open-minded and more likely to peacefully resolve emerging conflicts between these two giants, reaching, as Henry Kissinger refers to it, "a peaceful co-existence." This is the reasoning behind the Schwarzman Scholarship, a program to educate the next generation of global leaders, which was inspired by the Rhodes Scholarship.

Next, Schwarzman shared his insights on the markets and entrepreneurship for the annual Venture Capital & Private Equity conference, organized by the Harvard Business School. He insisted that young people need to be trained in "an apprentice business" and should not skip that process. Schwarzman noted that many in the new generation of rising entrepreneurs and workers find the apprenticeship period to be a waste of time and talent, but he insisted that it was vital nonetheless, "The biggest mistake I've seen people make with their careers is, when they're good, after two or three years, they announce that they're going out to start their own firm."

He stressed that in this particular industry, "the older you are, the more successful you become." For example, if you are starting a fund at an early age without enough credibility, it is exceptionally high risk. "This is not Silicon Valley, where failure is an option," he warned, "If you screw up on Wall Street, you are screwed. And when you make that detour, you may realize it only years later when it is too late. Getting back on track is really hard. Without training and maturity, you are unlikely to take advantage of great market opportunity."

Schwarzman also shared lessons on how to start a startup on Wall Street. He recounted his own experience about the founding moment of Blackstone, when he and his business partner met at the same hotel at the beginning, and kept asking themselves what they were going to offer that didn't exist, "Doing a me-too business, because it's you -- the only person who cares about that is you," he said.

Schwarzman also shattered the illusion that you can maintain work-life balance as an entrepreneur. "Work life-balance is a good part of a classroom mantra. At least in my experience, it's a day-and-night type of preoccupation," he said. "That is because as an entrepreneur you will have a reputation and responsibility that will keep you thinking about your business at all times. Sleeping at night is not a specialty of the entrepreneur," he joked, but was quite serious.

Lastly, Schwarzman shared what makes a business great and referred to his company as an example. According to his analysis, a great business needs a system. By having that, the business ensures that it almost never loses money. In Blackstone's case, there is a review committee that assesses whether an investment looks interesting and an investment committee that manages the risk.

According to his findings, having such a system, whereby people provide critical feedback to each other, is one of the most crucial aspects of a business. People are naturally inclined to not be critical and you have to train them to speak up and look for weaknesses. A great business is also about assembling a great team, by creating culture that attracts top talent and sets high standards. As the organization grows, you have to realize that change sometimes takes a year or two to manifest into reality, even when you already know the answer. It takes time to convince people and grow a great business.

As I reflected on the insights and stories that Schwarzman shared with students that day, I kept thinking about how a young Schwarzman called the dean of Harvard College, about the courage that he showed by simply asking a question. Don't underestimate the power of asking, I thought. You never know what you might get.

This was originally published at The Harbus, the student newspaper of the Harvard Business School, on February 17, 2015.