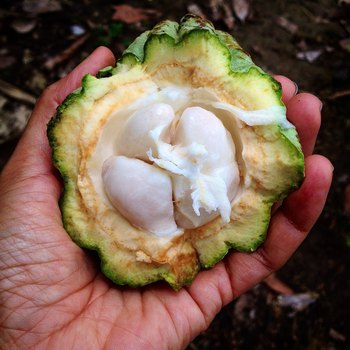 This time of year--or is it every time of year?--I like to reflect on chocolate, a miracle substance, my trusted companion in moments of sadness, extreme joy, amazement and gratitude, universal salve of the heart.

Chocolate soothes and ignites--as it has for thousands of years. Ten beans once bought the services of a prostitute for the night for the Nicaro people of Nicaragua who, along with the Maya Indians and others in Mesoamerica, used the beans as currency. The Aztecs called their bitter blend of cacao, water and corn meal xocoatl. It's believed they "ritualistically [ate] cacao off each other's skin during sex, and the Aztec emperor Montezuma ... drank copious quantities of a chocolate-based beverage to enhance his virility." Montezuma allegedly consumed up to 50 golden goblets of liquified chocolate each day to satisfy his harem of wives.

But it wasn't just a substance of sex. "Both the Mayans and Aztecs believed the cacao bean had magical, or even divine, properties, suitable for use in the most sacred rituals of birth, marriage and death." The Aztecs believed cacao was a gift of Quetzalcoatl, the god of wisdom, while the Maya called the seed "god's sustenance" and associated it with various deities, including the rain god and the gods of death and the underworld.

This delicious blend of sanctity and profanity is likely why Carolus Linnaeus (the Swedish botanist who developed the classification system--taxonomy--for plants and animals) categorized the fruit as Theobroma cacao: "food of the gods."

While researching my book, Bread, Wine, Chocolate, I was able to view this miracle substance at its source. I was writing about biodiversity, about how the foods we love are threatened by genetic erosion--a slow and steady loss of diversity in what we grow and eat. But I was also writing about love, about that moment you find yourself savoring something so wholly and intently you never want to let it go.

My journey led me to Ethiopian coffee forests, British yeast culture labs, and, as excerpted here, a cacao farm in Esmeraldas, Ecuador, run by Alberto Bautista, a former shrimp fisherman and cement factory worker committed to growing the prized Ecuadorian cacao Nacional instead of the CCN-51 hybrid, a more resilient, though less flavorful, cacao variety.

Like most vibrant cacao farms, Alberto's farm looks and feels like a forest. It's overflowing with vegetation (including cacao leaves up to 2 feet long), steamy with heat and moisture, and swarming with mosquitoes and midges (tiny, biting flies no bigger than a pinhead also known as "no-see-ums"). What looks, at first, like a mess of a jungle is, in actuality, a planned ecosystem. Alberto's farm is a field laboratory--a place where he can observe firsthand how different varieties of Nacional respond to everything Mother Nature sends their way, as well as tend to other crops he grows alongside the future chocolate.

As we ventured deeper into Alberto's farm, the incessant buzzing of mosquitoes and midges was punctuated by a much more pleasurable sound: the thud of pods falling to the ground. Ahead of us, Alberto whacked the pods off the lower branches and trunks of cacao trees with a machete. For the pods on the taller branches, he'd chop them off with a palanca, a hoe-like tool roughly 4 feet in length with a long, wooden handle and sharp, flat blade. Although heavy, the pods are suspended from their branches by impossibly small and narrow stalks, which are, at most, about one-half inch long and one-quarter inch thick. Expert cacao harvesters, like Alberto, can sever the stem in one motion, as easily as you or I can chop an apple.

I can still conjure it: the sound of the machete whooshing through the air for the end cuts and digging through the thick rind of the pod to reveal the pulp. It's what I remembered long after I left the lush forest: metal sinking into flesh. Known in Spanish as baba--literally "slime"-- the ivory flesh varied not only in taste, but also in intensity. Some pieces of fruit were juicy and thick; others nearly dry with only a thin layer of pulp surrounding the dark seed.

I dug my fingers into the gooey pod and started to pull apart fruit that was held together by the thick membrane I later learned was the plant's placenta. I tilted my head back slightly and dropped the fleshy seeds, one by one, into my mouth. My eyes widened and my mouth burst into a smile. It was ... astonishing. I had expected something that tasted like chocolate. Not this: not lemonade and honeydew, not custard apple and peanut brittle. Greedily, I reached for more and more. Each pod was different: some puckeringly tart, some sugar-sweet, some tart and sweet simultaneously. There were so many tastes, I doubted I'd ever be sated. These, I thought, were the tastes of biodiversity.

One of the greatest challenges--and greatest gifts--of biodiversity, is its serendipity. Alberto utilizes both serendipity and precision, planting some trees from seed and also grafting cuttings from his heartiest plants, collectively known as Nacional. The baba I tasted ranged in flavors from peanut to honeydew melon to limeade. Once processed, they become cocoa that has a mosaic of tastes and aromas. This same kind of tapestry effect happens in countries of origin known for their fine flavor.

Chocolate is currently dominated by a small group of multinational companies, including Mars Incorporated and Mondelēz International. They buy most of the world's cacao and, as a result, dictate what's grown and define the parameters of what chocolate tastes like. Every bite of chocolate consumed within--or outside--of those set parameters has the power to either perpetuate or transform what we eat.

Cacao farmers like Alberto sweat and toil, absorb the risk for the possibility of crops failing, get paid far less than you'd imagine and rarely, if ever, taste the fruits of their labor. For most producers, cacao is an investment, not a treat.

It takes Alberto four years to grow plants from seed and two years from grafts. The plants bear fruit for about 35 to 40 years, and then yields start to taper off. Every time yields diminish or plants die, he and his fellow farmers are faced with a choice of growing traditional varieties, such as Nacional, or replacing them with high-yielding hybrids, like CCN-51, or clones. Alberto understands this and is doing his best to stick with what he has. If he removes the dwindling amounts of Nacional that remain, it will likely disappear forever and, with it, its tapestry of flavors.

In each of my journeys, there was a moment when a single glass of wine or slice of bread changed me. But chocolate was, and is, different. There is no one bar of chocolate that improved my life; they all have--this miracle substance, this food of the gods.