Yuri Soares is chief of development effectiveness at the Multilateral Investment Fund. He holds a PhD in economics from Michigan State University and a Master's degree in agricultural economics from the University of Florida. He has worked in the United States and Brazil.

Latin America and the Caribbean is the most violent region in the world, with no fewer than five of its major cities experiencing more than 100 homicides per 100,000 people each year, according to the most recent Global Study on Homicide. While the pattern of violence varies across different regions, a significant share is linked to illegal drug activity, particularly in drug-producing countries and countries that are distribution channels to the main export markets of the United States and Europe. And as is argued in a recent op-ed by the Brookings Institution, the recent push to legalize the market of marijuana--particularly in the United States--should not be viewed as a panacea for the prevention of drug-related violence.

The success of many anti-drug measures adopted by the region's governments in the past decade has been at best mixed, and the costs associated have been high. The most common anti-drug efforts are related to eradication of crops, and include large-scale spraying, manual eradication, destruction of laboratories, and procurement and seizing of drugs. For example, in Colombia, which by most accounts has applied the most ambitious anti-drug policy in the region, the cultivated area significantly declined between 2001 and 2013. However, recent data from the United Nations that the cultivated area increased quite dramatically in 2014 demonstrates just how fleeting these results can be, and highlights the apparently intractable nature of the problem.

Traditional eradication efforts are also expensive. A recent estimate by Mejia, Restrepo, and Rozo shows that it takes about $100,000 to reduce one hectare of coca under cultivation, largely because 30 to 45 hectares must be sprayed to reduce one hectare under production. And all of this adds up. Again in the case of Colombia, Mejia, Restrepo, and Rozo estimate that total outlays in anti-drug efforts add up to about 1.1% of gross domestic product.

As a complement to traditional eradication measures, there are alternative programs that combat illicit drugs by building economic resilience. This is done by developing market opportunities and economic incentives for producers that may deter their participation in illicit production. Again, Colombia has been a regional leader in pioneering these efforts, taking steps including

These measures have the potential to introduce economic incentives that can alter the cost-benefit calculus of drug-production activities. Unfortunately, we don't know if they do in fact build economic resilience. And if so, would it be enough to serve as a viable alternative to the illicit market?

One of the few efforts to systematically learn about the role of alternative programs is a joint study of an alternative crops program in Colombia by the Multilateral Investment Fund and the UN Office on Drugs and Crime. 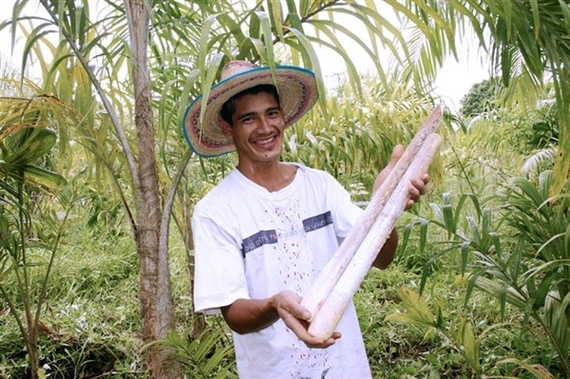 The program supported 57 small organizations of agricultural producers, representing approximately 3,000 producers who were at risk of participating in coca cultivation--either because they recently stopped coca cultivation or were located in areas with high coca cultivation. The project offered the producers technical support to improve their cultivation of alternative sources of income--such as cacao, coffee, honey, and African palm--but more importantly, helped the producers build new marketing channels to sell the alternative products. The study's results show that the project led to increases in productivity, better product quality, and significantly higher sales. Although coca production itself was not measured, the magnitude of the increased economic incentives--a full 30% increase in sales--could be sufficient to compete with a very profitable coca industry.

The program's success has led to its expansion; it is expected to reach 100,000 producers within 5 years.

Even scaled up, programs such as these will likely never provide sufficient incentives to dramatically roll back the cultivation of coca. The economic incentives of the drug trade are just too large. Alternative economic incentives must be deployed as part of a coordinated set of public policies. And as we have seen with the recent and abrupt increase in coca production in Latin America and the Caribbean, illicit industries have the ability to quickly expand into new areas. Reactive measures, such as eradication, typically have difficulty second-guessing growth areas, but alternative measures can be broadly deployed in any at-risk area. Along with other public policies, they can serve as a mechanism to develop economic resilience among at-risk agricultural producers--which can decrease the risk that entire communities revert to drug production.

Sandra V. Rozo is an assistant professor at the University of Southern California's Marshall School of Business. She earned a PhD in economics from the University of California, Los Angeles, and a master's degree from Universidad de los Andes in Bogotá, Colombia.