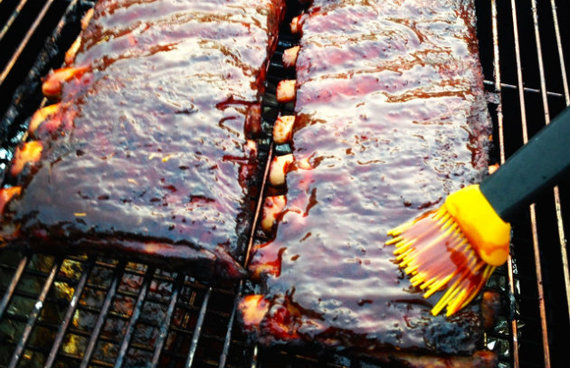 Most serious practitioners consider barbecue an art, the outcome of which depends on knowledge, skill, and intuition. Which is why I'm skeptical of formulaic approaches like the 3-2-1 method for cooking pork spare ribs. Last year, I wrote:

And if you serve ribs cooked by the 3-2-1 method, 95 percent of the people who taste them will react with delight and will declare you a genius. My guests sure did, and I did not deflect their praise. And yet ... and yet ... I felt a certain discomfort accepting my guests' compliments. These were good ribs. Safe ribs. Ribs by rote. These were ribs almost anyone could love on account of their moistness and tenderness.

(If you are unfamiliar with it, the 3-2-1 approach calls for smoking the ribs for 3 hours, cooking for 2 hours tightly wrapped in foil, and unwrapping for the final hour for a total of 6 hours.)

This barbecue-by-the-numbers method is undeniably popular among backyard pit masters and on the competition circuit, where it is believed to have originated. So why do I keep revisiting it? I have never been totally satisfied with ribs barbecued according to the 3-2-1 formula. Sometimes, the chew skews from tender to mushy. The bark softens in the steam while the ribs are foiled. The rub disappears. The flavors seem dialed down, a bit washed out, almost like boiled ribs.

After experimenting, I identified the primary cause of the problems: The ribs were simply spending too much time in the steamy environment of the foil.

Bottom line? The success of ribs, like brisket or pork shoulder, still depends on human intuition. Use the above formulas as guidelines, recognizing that a particular rack of ribs might need more or less time on the grill. Be flexible.

For more detailed tips on this method, visit BarbecueBible.com.