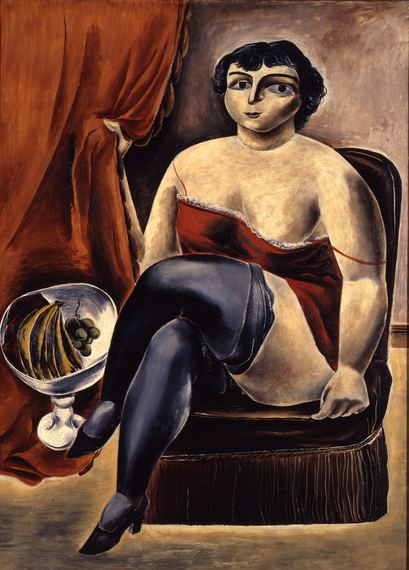 The Smithsonian American Art Museum in Washington, D.C. has a sensational survey closing soon: a major retrospective of the Japanese émigré painter Yasuo Kuniyoshi (1889-1953). The Whitney honored him in his own time with its first-ever solo exhibit of a living artist, no small matter. Yas, as he was known to friends, has since all but disappeared when he deserves to be celebrated. I am embarrassed I did not know his name, having taught graduate school courses on Asian Americans and taken undergraduate level classes on modern art. I was eager to learn about him, and having done so I am all the more enthusiastic about promoting him to anyone else interested in our shared cultural legacy.

Arriving alone in America, he attended high school in Los Angeles starting in 1907. That was the year that President Teddy Roosevelt finalized the "Gentleman's Agreement", which imposed a racial quota on immigrants from Japan, to resolve controversy over the segregated "Oriental Public School" in San Francisco.

During World War II, Kuniyoshi -- who had opposed Japanese militarism even in his youth -- was recruited by poet Archibald MacLeish, then with the OWI, to write anti-Imperial propaganda for the United States. He drafted it in English, and it had to be translated for him, because he was no longer proficient enough in his original language. Since he was on the East Coast, he was spared the loss of liberty of the internment camps, though he was classified an "enemy alien," confined to New York City and had possessions such as binoculars and camera confiscated. A popular figure in all his circles, he was President of "An American Group," which sponsored a display of "Artists for Victory" from which he himself was excluded. (The racial bar that restricted naturalization to "free white persons" was not lifted until 1952; it was not by choice that he lacked equality in formal terms.)

After the conflict, the State Department assembled a sampling of canvasses to tour the world to promote American ideals. Among them was "Circus Girl Resting," by Kuniyoshi (1925). Apparently causing offense because she was plump and her depiction was (mis)proportioned as to be expected in Expressionism, not due to her cleavage, the piece provoked President Harry Truman to remark, "If that's art, I'm a Hottentot."

According to press accounts from the period, actual show girls then sent telegrams to the White House to express appreciation that they had been recognized as much prettier. The government promptly recalled the 117 images from overseas and sold them off.

All of that context is crucial. Like many Asian Americans, Kuniyoshi is unable to escape his identity -- not as he would have described himself but as others perceived him. In Asia, he is regarded as "European." In America, he remains a perpetual foreigner even while an official representative at the Venice Biennale. He is avidly collected in the land of his birth from which he might be deemed a refugee. He decided to leave it behind. As an adult, he resided in America with visits across the Atlantic rather than the Pacific. He was trained here. He was dedicated to democracy, including organizing Japanese Americans artists for the cause.

The biography of Kuniyoshi frames the question in its title: Becoming American? It offers the ambivalent answer in the subtitle with its reference to "identity crisis." The present curators speculate that despite his positive outlook, Kuniyoshi's creativity reflects anxieties about assimilation. The brightness of the post-war pictures, some done with new polymer pigments, are said to symbolize disillusionment. The biography, by ShiPu Wang, boasts a dust jacket featuring a 1943 oil that one might guess was by a French or German counterpart observing nightlife. In contrast, the exhibit catalog by Tom Wolf features a cover with a 1924 self-portrait as a photographer with overdone Asian features, under the drape used with an antique studio camera.

Any viewer of Kuniyoshi's work should be sure to see the supplemental room of artifacts laying out Kuniyoshi's personal story. The enormous black-tie dinner honoring him; the snapshots with his wives -- there were two -- and the complimentary correspondence attest to days that were full.

To me, Kuniyoshi is no more enigmatic than inscrutable. He is figurative though not literal. He is an individual. He has defined himself. Or he has tried to do so. He has succeeded.

He has sought to emphasize the surface. His own race is rarely visible. In fact, he appears to be its only member. Both of his spouses were Caucasian; under the Cable Act, the first of them forfeited her citizenship by entering into the union. (The Act was repealed.)

Anything that may have tormented his soul stayed inside. Whatever the etiology, he succumbed early to cancer.

The current gathering of Kuniyoshi's output, spanning his career, is unlikely to be seen again, since the there are no plans for a tour. That is a shame.

This masterful painter had a career of multiple stages. His self-portrait as a golfer has him posed almost as if a samurai, the club serving as his weapon. (At fancier courses, Kuniyoshi would have had to play during off hours or within a group more readily accepted.) Clowns and other performers are recurring figures, lurid in their coloring, offering a peek behind their masks. The productivity culminates in pen and ink sketches that present natural objects as darkly as possible: a fly, a fish head, a lone bird within the branches of an old tree, respectively, look as if they were on scratch-off paper.

Still lifes and Parisian scenes abound. Kuniyoshi belonged to his era. A series of full-figured people discloses that the scandalous circus girl has a family of sisters and nieces and nephews, some of the youngsters looking preternaturally anxious. Kuniyoshi belongs in a line from Rubens to Botero. While an entire wide-eyed population lives without perspective, sad jesters reside under black light.

As a bonus, another Asian American artist is on the walls nearby. By coincidence, the conjoined sister institution, The National Portrait Gallery, has recently acquired Roger Shimomura's Crossing the Delaware. A Pop Artist still active, Shimomura has parodied Gottlieb Leutze's iconic Washington Crossing the Delware of 1851 (Leutze, for that matter, was himself a Schwabischer, from that part of Germany, who divided his life between the countries old and new.) In the flat knock off done in 2010, Shimomura is the bespectacled leader of grimacing warriors on waves out of a woodblock print. (The nation's first President and his troops are silhouettes in the background.)

I wrote this while sitting in the elegant atrium of the dual museums. Renovated by Sir Norman Foster with a subtly undulating roof that seems to hover over a vast interior courtyard where even children splashing through the shallow water feature cannot disrupt the serenity of the design, it is my favorite space in the capital. Our museums are how we, with self-awareness, present ourselves: the past to the present, the present to the future, the natives to the tourists. They authorize, authenticate and validate, and that they have selected Kuniyoshi proves he was not wrong to have confidence he would be welcomed.

My friend Bill Tinto, a painter himself, had recommended to me that I discover Kuniyoshi for myself. I am glad I did. I in turn commend him to you.