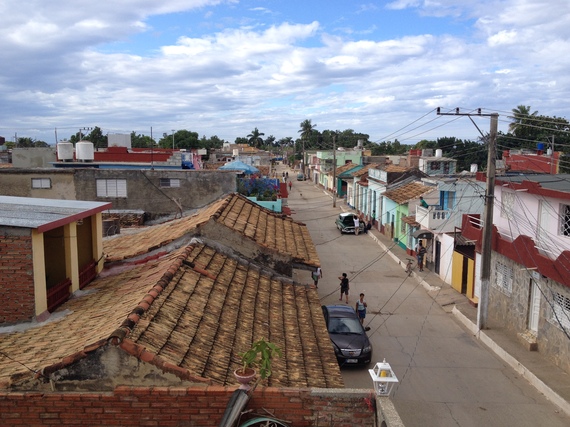 This is part II of a V-part series on my experiences in Cuba. Read Part I, Part III.,Part IV & Part V

The hostel in Trinidad, El RinTinTin (Calle Simón Bolivar, Desengaño, #553 Trinidad), is run by the warm and friendly Mariela and Lorenzo. My girlfriend and I are staying in a simple private room with an en suite bath. I am awakened at dawn by the crow of roosters and the beginning bustle of the street below, but quickly fall back asleep, as the windows are covered with large wooden shutters that block out almost all light. When I awaken once more, I go out onto the rooftop terrace and do yoga, watching the town's tiny streets and listening to the vegetable sellers hawking their wares. Mariela fetches me café con leche, then lays out a huge breakfast. She promises us a seafood dinner of local lobster and shrimp that night, and I am looking forward to it. Little do I understand the value of the food here, what it takes to make sure the guests can eat fresh, delicious meals. That awareness will come later.

Today we will welcome two Tíos (uncles) and another Prima (cousin), relatives who have driven almost five hours -- all the way from Havana -- to meet us.When they arrive, I am amazed by the car, a pristine 1955 Chevy belonging to Armandito, the sweet young driver serendipity handed my friend three trips ago and who is now practically a member of the family.

By lunchtime, they join us on the rooftop terrace of a neighboring cafe for fish, chicken, and (my favorite) lamb, along with the ubiquitous Morro. Trinidad is full of sweet small local restaurants, many overlooking the town square. However, it also boasts some high-end establishments, like Restaurant Museo. While the place looks like a museum of restaurant pieces such as one might find on the Titanic or in a Spanish palace of a bygone era, the proprietor assures me that you can eat and drink on each china plate or crystal goblet. 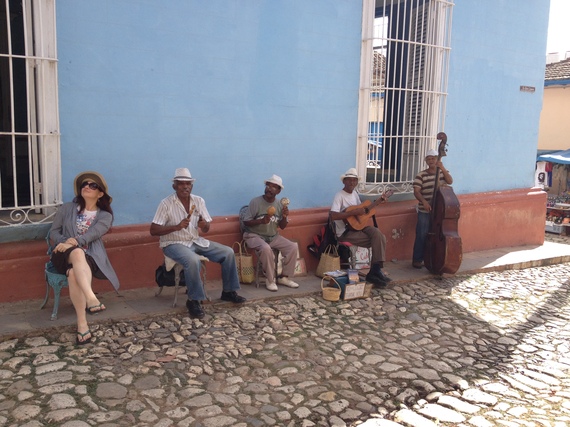 Everywhere we go, there is music. Cubans play in small bands -- usually one guitar, an upright bass, conga drums, and maracas -- and each musician sings. Some speak decent English, too; many have their own CDs and write their own songs. Even in Trinidad, they all know the melody to "Hotel California."

After lunch, we walk the cobblestone streets of this colonial town, stopping into local shops and art galleries. My favorite -- which has both intensely photorealistic black-and-white paintings and a series of thick impressionistic oils combining the iconic Che Guevera image with soda cans -- is called Water With Sugar (Rosario 262 e/José Marti y Antonio Maceo, Trinidad). The earnest young man who runs it speaks the best English I've heard yet. He offers me his card: William Martinez, Salesman of Art. Though he assures me I can bring paintings back to the US, I regretfully demur; I have been told to buy nothing as it can be confiscated in customs. [UPDATE: 2 weeks later, the restrictions were eased by the US government and now you can bring some rum and cigars back, and possibly some souvenirs, such as original art. If you check the OFAC web site, do note that may not yet have updated its documents)]

At a local cigar shop, however, I beg them for a wooden cigar box, hoping I can at least bring back an empty container. The proprietor shakes his head, and my friend translates: they can neither sell nor give me an empty box; I must buy a case of cigars. No further explanation is forthcoming, and I leave sadly empty-handed.

Not so at the local grocery store, where I have come to buy a bottle of Havana Club rum to share with my friend's relatives at dinner. Surprisingly, the prices are the same as the rum at the cigar store (I discover later it's identical everywhere), and Havana Club comes in about eight different varieties. I settle on an Añejo especial, a dark rum that's oak aged for four years. I glance around the store to see that while there are lots of cookies, crackers, and rum in this little place, the single freezer is woefully empty, containing only a few packages of frozen green beans and nothing more. Across the street from the Hostal, I find a stall that sells fresh fruits and vegetables, but the selection is surprisingly narrow, with none of the citrus or avocados I would expect in this tropical climate. 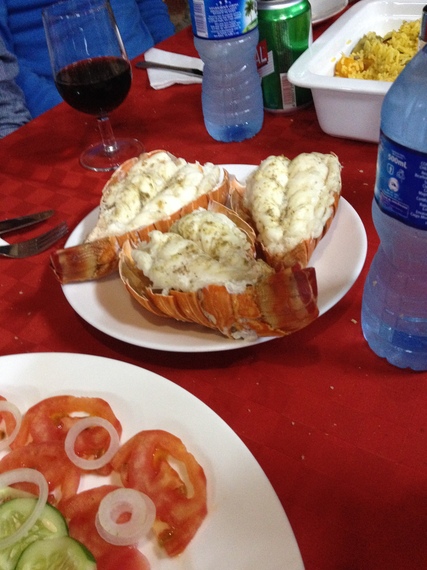 That night at our seafood dinner, as I dine on local lobster tail, avocado salad, plantains, Morro and our Havana Club, I raise my questions. In broken English and Spanish, the Cuban relatives all begin to explain to me about the dreaded ration book. This is where I learn about Cuba's underbelly, and while I hesitated to detail this in a travel article, it is intrinsic to this island and to the overwhelming lessons of prosperity and consciousness that I found here.

Basically, there are two economies in Cuba, two currencies, and two sets of rules -- one for Cubans, and one for everyone else. The Cubans earn, on average, between U.S. $12 and U.S. $20 A MONTH in the form of Cubanos, a Cuban peso that is paid only to natives. Tourists and any non-Cubans living and working in Cuba use a currency called a Chavito, which, though it is also a peso, is worth twenty-five times the Cubano. Every Cuban has a ration book, and obtains their food by having their ration book stamped. They are entitled to just eleven ounces each of meat, fish, and chicken, though apparently there is rarely either meat or fish, so everyone usually just gets a little less than three pounds of chicken. Plus five eggs. PER MONTH.

The coffee ration (and I use the word coffee loosely as it is cut with some sort of dried bean mixture), is just four ounces per person per month. I find this last statistic the most ridiculous, as I can buy a pound of Cuban coffee in Miami for about $2.50. In fact, we have brought over several pounds of coffee to give as gifts, and I suddenly understand why; though it seems like coals to Newcastle, almost 100% of Cuba's coffee crop is exported. 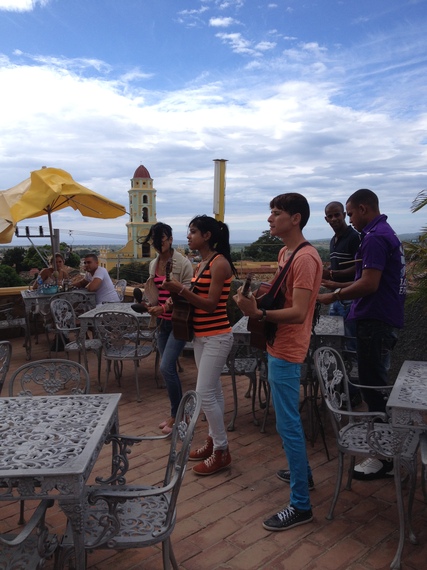 Cubans are also entitled to six pounds of rice and six pounds of sugar each, which explains why some Cubans, though virtually starving, are fat. When I ask how they can possibly survive on this diet, why everyone isn't hungry all the time, they all shrug. They don't understand it either, they tell me, yet they simply accept what is.

In the last couple of years, a free market has been allowed to spring up, replacing the illegal and dangerous black market. Here, Cubans can supplement their meager rations, though the prices are based on the Chavito, not the Cuban peso. So while a pound of chicken might cost just two pesos, that's fifty Cubanos, or as much as 20 percent of someone's monthly income.

The next morning at breakfast, I can barely eat my eggs, and keep asking everyone else if they want more food. I am uncomfortable by someone's monthly salary, sitting on display for a single meal. But everyone talks at the same time, enjoying their café con leche made with fresh milk (for once), and the soft white rolls. Today they are looking forward to the roadtrip back to Havana, and to having La Americana (that's what they call me) see the Cuba that they all clearly love so well.