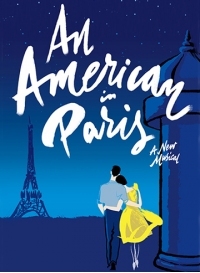 Do songs have feelings? I am just crazy enough about a great many songs to take this preposterous question to heart. If you prick a song, does it bleed? If you tickle it, does it laugh? If you poison it, does it die? If you wrong it, should it not be revenged?

These wildly over-existential ponderings were triggered by, of all things, the recently opened, widely celebrated, extravagantly beautiful, production of An American in Paris, which, as so many have been saying, really is great to look at. The dancing scintillates, the costumes sumptuously sache, and the sets decorate so hyperactively, they actually appear to dance and, virtually, sing.

Here is my problem, though. In the second scene of the First Act, after an opening firestorm of expository dancing, an ex-GI character by the name of Adam Hochberg is discovered by another ex-GI named Jerry Mulligan, composing music at a piano in a cafe. Adam is already our narrator; he has addressed us directly from the outset. Now we also learn that he is a composer and "a genius," as his French admirer, the aspiring singer, Henri Baurel, makes clear, joining the action, stage left. The music that Adam is writing, according to Henri is: "brilliant." And so, Adam plays. But what does he play? He plays "I Got Rhythm."

Now I realize this may seem silly to some -- perhaps many. Still, "I Got Rhythm" must be among the most recognizable items of music ever written; instantly identifiable as the work of its actual composer, George Gershwin. Of course, all of the music in An American in Paris is Gershwin music - no secret there. Nevertheless, to ask an audience at a George Gershwin musical to buy the notion that someone else is up there composing "I Got Rhythm," struck me as wrong. Really wrong.

This folly was compounded (for me) by the fact that the script chooses to kid Adam Hochberg with "I Got Rhythm" in a manner willfully tone deaf to Ira Gershwin's lyric for the song. (I'm assuming Ira is herewith dissed too, in that Adam is supposed to be writing both words and music.) Adam Hochberg believes that gloom equals art. ("I LOVE depressing," he maintains. "Artists have a responsibility to show the dark underbelly to life."). Adam, therefore, writes his "I Got Rhythm" in a dark, foreboding, minor key ludicrously inappropriate to the song's perfectly sunny disposition.

That is the joke.

"Days can be sunny, with never a sigh; don't need what money can buy," sings Henri, to Adam's morose piano accompaniment, running down the familiar verse (how many verses actually are familiar?) to "I Got Rhythm."

"I got rhythm," Henri jumps back in, grabbing the keyboard from Adam and kicking the song into its familiar 4/4 joyousness, "I got music -- I got my gal -- Who could ask for anything more?"

But it makes no sense. And that matters. To trifle with "I Got Rhythm" in this way, subliminally announces to an audience: We are just using this music to get what we need. The music doesn't matter. It is simply our tool.

It seems worth pointing out that the original movie version of An American in Paris treated George and Ira Gershwin's songs with deftly offhand affection, without being remotely over-deferential, and without ever suggesting that anyone other than the Gershwins wrote all of this glorious stuff. Yes, Adam (last name "Cook" in the film), the composer character upon whom Adam Hochberger is based, does proprietarily conduct and perform (simultaneously) a section of Gershwin's "Concerto in F."
But it is all a dream.

I like the fact that An American in Paris on Broadway -- with choreography and slick direction by New York City ballet master Christopher Wheeldon, those captivating costumes and overwhelming sets by Bob Crowley, and an often ingenious, but too often disingenuous, book by Craig Lucas -- really does try to reimagine the movie. Robert Fairchild soars balletically beyond anything I have ever seen a male dancer do on a Broadway stage. Veanne Cox as Henri Baurel's Mom, lands one-liners with a Gallic deadpan redolent of a deeper sadness and pain that is quite potent. And the guy playing Adam Hochberg, one Brandon Uranowitz, is absolutely delightful in an utterly thankless part.

Not all of the Gershwin music is manhandled. Some of the repurposing of classic songs makes dramatic sense. Others I have similar issues with, which I need not detail here. "I Got Rhythm" is enough.

To fall in love with a show, you need to trust it. That is the bottom line. Without trust, you certainly can admire a show, but love goes right out the window.

Of course, I may be missing the point; taking the gag far too literally.