Beginning in February 2013, researchers at the Institute for Immigration Research (IIR) at George Mason University began tracking the national immigration reform conversation on Twitter. In Part 1, we revealed that our analysis had uncovered five clusters of power tweeters (see Figure 1): (1) Mainstream, (2) Reformers, (3) Progressive Media, (4) Institutional Conservatives, and (5) the Tea Party. In this article, we'll delve further into our data to look at the similarities and differences between these groups, and present several additional findings. 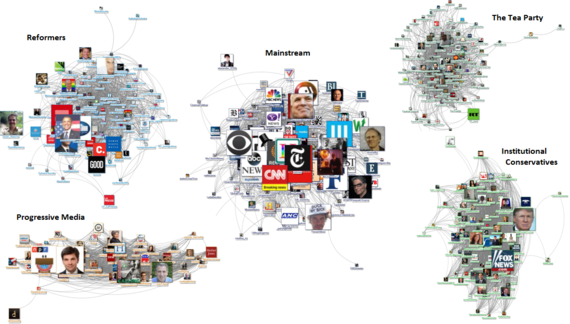 To begin, we examine two broad measures of influence to see if any of these clusters is more or less influential than the others. We then look more deeply at the characteristics of the tweeters in each cluster -- beginning with the length of time on Twitter, the number of tweets, and the number of followers and others followed -- to better understand the nature of their influence. Finally, we examine the relationships between the power tweeters in each cluster, to look at how relationships among themselves contribute to each group's overall role in the immigration reform conversation.

The basis for this analysis is found in the statistics reported in Figure 2. For each statistic, asterisks are used to indicate when the value for a cluster is statistically different from the value for the Tea Party cluster.

As an overall measure of influence, we can compare the average Klout scores for the power tweeters making up each cluster. A Twitter user's Klout score is a number ranging from 1 to 100 and is widely accepted as an indicator of an individual's online influence.

As Figure 2 indicates, the average Klout score for Tea Party members is lower than those for each of the other clusters. In all but one case (the Reformers), this difference is statistically significant.

Klout scores are representative of a tweeter's overall influence, but the measures found in the next two rows in Figure 2 -- betweenness centrality and impact -- are based specifically on our analysis of tweets containing the word "immigration."

With our measure of impact, a low value indicates greater influence. As you can see in Figure 2, the impact score for members of the Mainstream group was on average about 25 percent more influential than power tweeters in other groups, including the Tea Party.

Figure 2: Measures of Influence for Five Clusters of Immigration Tweeters

To better examine the relative influence of these clusters, Figure 3 provides additional indicators of the Twitter presence of the members in each cluster. First, with the number of days on Twitter, we see that on average influential members of the Tea Party cluster are newer to Twitter than members of the other four clusters. Then, in the following row, we note that the number of tweets from the Tea Party cluster members is roughly similar to those from the other clusters-with the exception of the Reformers, who tweet significantly less often than all other clusters.

We found important differences between the Tea Party cluster and other clusters, however, in the next two rows of Figure 3, which provide the average numbers of Twitter followers and users followed by the members of each cluster. Here, too, we see an important difference in how these groups seek to become influential.

By contrast, the Tea Party power tweeters had an average following of 47,000, far fewer than any of the other groups--but they averaged nearly 35,000 follows themselves, a figure three to seven times greater than the other groups.

One reason for this difference is a movement among conservative tweeters referred to as #tgdn, or the Twitter Gulag Defense Network, in which, according to the founder Todd Kincannon, "conservatives find and follow each other in order to defend against spam blocking liberals who get conservative Twitter users suspended." This strategy builds on the premise that Twitter is less likely to suspend a user with several thousand followers.

Figure 3: Measures of Influence for Five Clusters of Immigration Tweeters

This suggests that the influence of the Tea Party group is largely attributable to activity within its own cluster. Support for this interpretation may be seen in Figure 4. The clustering coefficient indicates that the members of the Tea Party cluster are significantly more closely tied to one another. In other words, this cluster is "denser" than all other clusters of influential immigration tweeters.

In addition, the reciprocity ratio found in the final row reveals that members of the Tea Party cluster are significantly more likely to both follow and be followed by one another than members of all other clusters.

Figure 4: Measures of Influence for Five Clusters of Immigration Tweeters

Based on the findings presented here, when it comes to the immigration reform discussion, one may be tempted to treat the cluster of influential Tea Party tweeters as a tempest in a teapot. Though tweeting at a pace comparable to members of other clusters, they do not have much influence on the overall Twitter conversation on immigration. But we believe that dismissing this apparent internal soliloquy as wholly unimportant would be premature.

First, the tweets we have analyzed here only cover one slice of time, between February and June of 2013. These tweets were made as the Senate was successfully passing a comprehensive immigration reform bill, prior to Speaker of the House John Boehner's July 2013 statement that he would refuse to put the Senate bill up for a floor vote by House members unless a majority of Republicans would support it. In short, it was a time when the Reformers and Progressive Media were on the "offense" with regards to immigration reform, while a significant number of conservatives were on "defense."

Second, this analysis just looks at power tweeters, not the whole of the discussion about immigration reform on Twitter. It is possible that the cumulative impact of many individuals expressing the same views as the Tea Party power tweeters could actually have more impact than that of the subset of most influential tweeters in the Tea Party cluster. This would require a different type of analysis to assess.

Finally, and perhaps most importantly, unlike Vegas, what happens on Twitter does not necessarily stay on Twitter. Tweeters with a Tea Party orientation are likely to have an impact on the immigration reform discussion quite apart from the conversation on Twitter. Being active on Twitter does not preclude offline forms of activism and influence. In fact, having a significant social media presence is increasingly a means to claim credibility in offline arenas. Our analysis of influential Twitter networks does not capture this sort of influence.

It remains to be seen how the interplay of online and offline dynamics might affect the ultimate outcome of immigration reform. We hope to investigate this in more detail as the movement -- or lack of movement, as seems to be the situation for now--toward immigration reform continues to develop. Social scientists have long been interested in public discussion around politics and policy. The difference today, when much of this discussion takes place in public digital spaces, is that the conversation leaves plainly observable digital footprints. These are the tracks we will trace as we hope to better understand the voices of the individual actors and networks that promote or hinder immigration reform.