Susan SurfTone, the reigning queen of instrumental surf rock, makes her singing debut on her new song, "Little Bit Lied To," a perfect anthem for this presidential election. While the song focuses on lying in general and doesn't support one candidate over the other, SurfTone says she likes Hillary best. But does Hillary make her feel a "little bit lied to"? SurfTone said, "I wish she would be more truthful but would the Republicans and the press let her be without jumping all over her?"

When questioned about why she decided, after recording four instrumental albums, to sing for the first time, SurfTone said:

"I wrote "Little Bit Lied To" in 1993...I always had in the back of my mind that some day I'd like to sing this song. Fish gotta swim, birds gotta fly and eventually guitar players have to sing.

"A core issue in the 2016 Presidential election is the fact that the American people have woken up to the extent to which we are lied to by our politicians. Both parties do it and it's just the way it is. 'Little Bit Lied To' seemed to take on a larger meaning in this context and it was a 'now or never' moment for me so I stepped up to the mic. Some of us are ready to tear everything down because of the lies but I think many of us are just demoralized by it. It's difficult to have hope if we can't believe anything we are told. The middle of the song addresses the fact that, if lies continue, eventually big changes are made. One has no choice.

"I think it's a good anthem for the disillusioned electorate. If I can sing it, so can you. And it lets the political class know there will come a day for a house cleaning if we don't start hearing the truth." 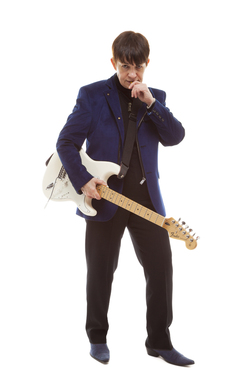 The "Little Bit Lied To" lyrics:

I don't care what you have to say
I watched you last night, don't want to talk today
Can't fool myself anymore
It's time for you to find the door