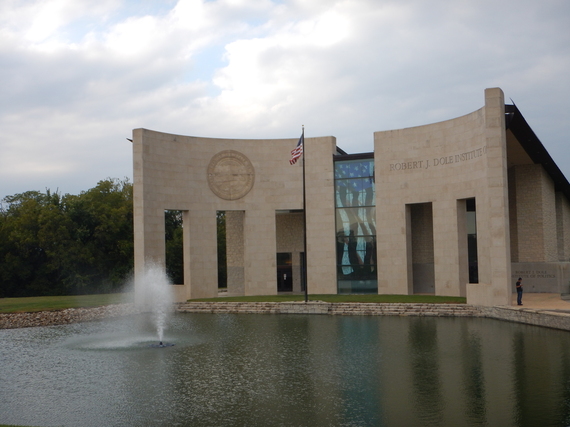 "I do not need the presidency to make or refresh my soul. That false hope I will gladly leave to others, for greatness lies not in what office you hold, but in how honest you are." Bob Dole

It is a scourge upon our nation, affecting millions of Americans: PID --- Politically Induced Despair. Not to be confused with the other PID, Pelvic Inflammatory Disease (although some symptoms may overlap: abdominal pain, a sense of bloating, nausea), the psychological PID is highly contagious, with an ability to 'go viral.' Those affected experience intense anxiety, depression, helplessness, mood swings, decreased libido and neurotic compulsivity with regard to television and/or social media.

But there is help.

The Dole Institute of Politics is a striking building, set on a hillside in Lawrence, Kansas. Named for a Republican, in honor of a Republican, its mission it to promote civil discourse in a bi-partisan, philosophically balanced manner as well as to encourage civic participation in the political process. To that end, the Institute is a source of on-going workshops and programs that consistently challenge bias, offer alternative perspectives and generate solution-focused thinking.

In other words, an antidote to the denigrating, vitriolic hyperbole of the current campaign process.

While there is no cure, the Dole Institute can provide symptom relief for PID.

Every Tuesday, for about 2 months prior to the presidential election, the Dole Institute has presented a series titled "Toss Out the Playbook: Trump, Clinton and the Wacky Politics of 2016." (And they had no idea when they started just how 'wacky' it was going to get.)

The moderator is Steve Kraske, an award winning political columnist, journalism professor and radio host, who has appeared on CNN, NPR and Fox. His insightful questions and respectful demeanor set the tone.

The audience tends to range from 18 to 86, a balance of Republicans and Democrats. As a Democrat, I never expected to be sitting six feet from Jeff Roe, Ted Cruz's campaign manager, renowned for his no-holds-barred strategies - and a man I had vilified as one of the founders of negative campaigning.

But, up close and personal, it became clear that he was just doing his job. And, positions aside, his anecdotes and experiences of steering a multi-million dollar presidential campaign in a crowded field that included Donald Trump kept my attention. What I relished more, however, and I think Mr. Roe did as well, was how damn courteous everyone is at the Dole Institute. The room contained dramatically different positions, yet, somehow, total strangers managed to listen and query without interruptions or sarcasm. 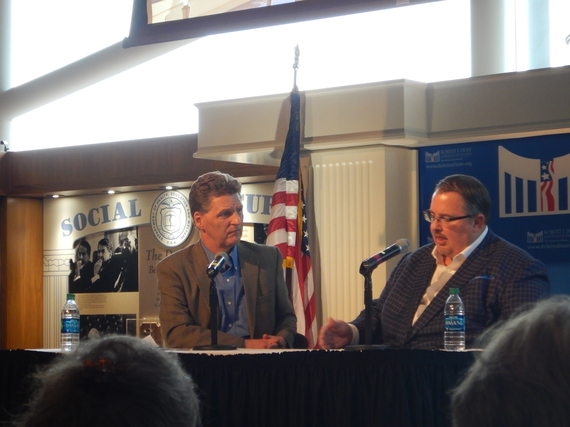 Were you frustrated with the debates? Scott Harris (award winning university debate coach and past president of the American Forensic Association) and Diana Carlin (a national authority who served on the Advisory Board to the Commission on Presidential Debates, created the DebateWatch program, copiously interviewed on CNN, C-Span, NPR, ABC, PBS, Fox, BBC... the list goes on) discussed why and how the presidential debates are not really debates at all.

Want a peek 'behind-the-scene' as far as political organization? Steven Jacques (who was a presidential appointee in three administrations, served on White House staff and as a senior official in the State Department and Department of Commerce) explained just what is involved in being an 'advance man' for the White House and presidential campaigns over decades.

And, on Nov. 1st, there will be a final session on gearing up for election night: the key states, key congressional elections, signs to indicate which direction the election is taking.

If you are one of the millions of Americans struggling with PID, it is critical that you take steps now. Pills don't help. Talk therapy makes it worse. Your first step is to turn off MSNBC, CNN, Fox and social media. Just do it.

Check out the "Toss Out The Playbook" series. Review the Dole Institute play-list, other videos, etc. Escape to this reflective netherworld of civility and courtesy.

Take as much time as you need.

The shock of authentic civil discourse is the best therapy for PID. In ten minutes you'll feel just the slightest shiver of hope that we may, one day, have a political process that is rational, position-focused, solution-focused and ... please, God, let this be true... respectful.

And even a shiver of hope is better than despair.

Susan Kraus is a therapist, mediator and writer in the heart of the heartland... and she, too, suffers from PID.