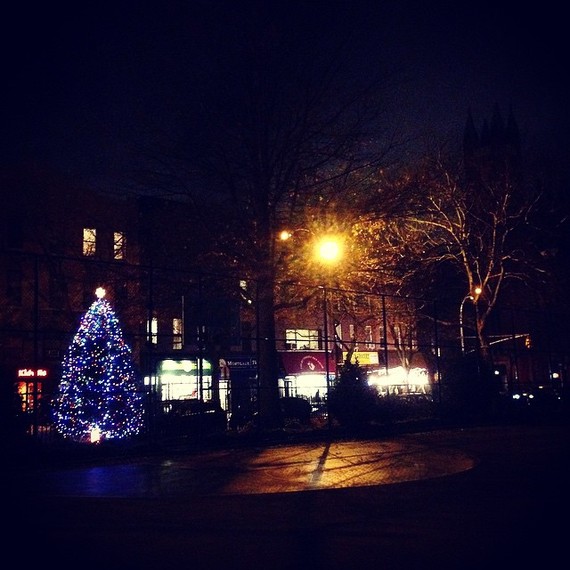 I left the gym near Astor Place early the evening of Thursday December 11. I'd felt bloated around my abdominal area for most of that afternoon and trying to workout wasn't making matters better. What seemed weird to me, is that sense of feeling full and crampy, came on right after a rather significant, but otherwise normal bowel movement, or BM, after lunch.

I'd assumed I was suffering from some sort of intestinal issue, maybe the onset of irritable bowel syndrome following such a big poop. By around 8 P.M., when I got back to my place in Brooklyn, I started doing some online medical research. I still wasn't sure what to make of all the information and feedback I was getting when I described my symptoms to Google.

I had a bit of an appetite so I ate around half a bowl of ramen noodles. Not much later that evening, the bloated feeling evolved into a sort of delicate nausea coupled with a more tender belly. It was the same tender to the touch pain I've experienced after a hard-core abs workout. By 11 P.M., I went to bed and fell asleep, but around 2 A.M., I was back up. The pain had assumed a more unpleasant tone, sharp almost piercing throbs in my lower right abs area, jousted me up. It hurt more when I was lying down.

I kept hoping the pain would subside, so I went to work, but by 11:30 that morning, I told my boss and co-workers I thought I'd better go to the Emergency Room because by then I'd called a couple of friends, and they as well as I was suspected my syptoms suggested an appendix issue.

It was cold out, but I walked on crowded streets the short distance from near the World Trade Center across Lower Manhattan, to the east side, the home of Columbia Presbyterian- Downtown Hospital.

In the ER, I spoke to a nurse, and was seen pretty quickly. A doctor came into my triage room, asked a few questions, and then commenced to poke around. When he pressed down on the lower left section of my abs near the groin, the pain was sharp and I gave it a ten plus ranking in severity. And despite feeling like a wimp, I made some noise.

Soon there was a morphine drip in my arm, and although that dulled the pain, it also turned me loopy. I was instructed to drink imaging solution for a CT scan, a test that later confirmed, as a Surgical Physician's Assistant told me, my appendix was angry and would need to come out right away. I was fine with that, after all, isn't the appendix a useless little poop catcher anyway? Isn't it a finger shaped organ that doctors call vestigial, a mere leftover from an evolutionary glitch?

For the next few hours, while hooked to a drip of pain meds, I tuned into the ER sideshow, the woman who'd fainted after leaving the diner, the homeless man that refused to leave and was getting escorted out by security as he yelled, "don't touch me." And, then, there was a young man, suspected of having a stroke that was having trouble understanding the doctor.

But here in my own little personal healthcare universe, the big New York hospital adventure was going to be focused on my appendix.

The appendix sits at the junction of the small and large intestine. It's a thin tube about four inches long. WebMD says one recent theory of its usefulness is that the tube acts as a storehouse for good bacteria, "rebooting" the digestive system after diarrheal illnesses. Other experts call the appendix is just a useless remnant from yesteryear.

Whatever its purpose, if the appendix gets infected and inflamed, most medical experts say it requires prompt surgery to take it out. Left untreated, an inflamed appendix will eventually burst, or perforate, and that can spill pus and infectious mucus into the abdominal cavity causing conditions such as sepsis or even abscesses within the abdomen. Put simply, an untreated ruptured or perforated appendix can be downright nasty, even deadly.

Later that night, I'd join the estimated 300,000 Americans each year, who get their appendix removed. Since I'd come at the early onset of symptoms, the doctor said there was little reason to believe my appendix had ruptured or perforated and was just inflamed. That meant I could have a minimally invasive laparoscopic procedure. However, if it was perforated or burst, I'd have to have the regular incision as well as several days of antibiotic treatment.

The PA who confirmed my diagnosis let me know the surgeon performing my procedure was tops in the field. Before going under, I met him briefly, and he assured me, they'd take good care of me. The staff was great, friendly and clearly smart, the hospital, efficient, almost intimate, I was happy I'd walked the short distance there and not attempted a hike up to one of the bigger hospitals uptown.

But since this news of surgery was still really a surprise, as I assume most appendicitis' are, I thought I'd better call people quick, let them know what was going on. I got through to a few friends, but decided I'd wait and call my parents in Alabama the next day. I asked one close friend to come around the time I was expected to get out of the procedure, and he was there when I woke up.

Everything went just fine. I spent one night in the hospital, and other than having a roommate who's whistling while he was snoring sounded like a man calling his dogs, thanks to the pain pills, I rested peacefully.

"Why aren't you sleeping, " asked the nurse on my floor at around 4 in the morning.

"Not at this hour dear," she said, which was followed by another pain pill.

Truth is, I was hungry. I hadn't had food since a quarter bowl of cheerios earlier that morning. The night doctor came in, and said, if I ate slowly, I could have soft solid food the next morning. That was better than a fan. Still, I couldn't really sleep what with the birdcage next door.

Fast forward to 2 PM the next day, a friend was picking me up in his car, and I was headed home to Brooklyn. The next few days, I watched more movies than I've seen in the past decade.

Soon enough, that same week, I also wanted to know more about exactly I'd been through. I was able to contact a few doctors that hold some expertise on appendectomies and they agreed to share a few thoughts.

It turns out, it's not so easy for a patient or even a doctor to be certain if they do or do not have appendicitis according to Dr. Arielle Levitan, Internist at North Shore University Health System and an instructor at University of Chicago's Pritzker School of Medicine.

She said the textbook presentation is abdominal discomfort that starts very generally or around the belly button and migrates down to the right lower side of the abdomen. It is typically associated with a fever and lack of appetite.

"Unfortunately none of these features are absolute. Many other things can mimic appendicitis and appendicitis can also mimic other things. The only definitive way to know is with a CT scan, done preferable sooner rather than later before the appendix ruptures," said Dr. Levitan.

But what about that bloated feeling I'd had early on?

Dr. Allen Kamvara, MD an attending staff member at Los Angeles' Cedars Sinai Medical Center, Department of Surgery, explained that what usually starts appendicitis off is something called a fecalith getting stuck within the lumen of the appendix.

"Fecalith is literally a stone made of stool. Normally, things go in and out of the appendix freely - no harm, no fowl. However, once the opening to the appendix gets blocked, it's the blockage that causes the infectious cycle. A fecalith is often times the source of that obstruction," said Kamvara.

He said the intestines are pretty responsive to inflammation. That's to say, they will essentially shut down when something wrong is going on. The general term for this is an ileus.

'With the appendix starting to inflame, it's quite possible your gut essentially had its one final push, so to say, before it went quiescent in response to the inflammatory reaction happening at the base of the cecum," he said.

Dr. Kamvara stressed to me that Appendicitis is a serious acute condition. And, appendicitis does progress rather quickly, which means, it is not something that can be watched for several days. Most often, if not treated within two to three days, it will progress to perforation.

"So, if you have abdominal pain that is only worsening, I would not wait it out. Though no longer as deadly as it used to be, as our ability to treat and control it has improved
tremendously, a perforated appendicitis carries tremendous morbidity and
will require prolonged treatment plans to improve it," he said.

When an inflamed appendix is treated promptly, people do fine. In fact, with the advent of laparoscopic surgery, most patients will go home within the same day of having the procedure.

And the symptoms, more importantly, the causes of those pains aren't limited to adults. Children and young adults experience appendicitis too.

Dr. Jen Caudle, assistant professor in the Department of family medicine at Rowan University adds that appendicitis is also one the most frequent surgical causes of abdominal pain in children. It's common between age 10 and 20 years old.

In fact, "Over 5% of the population develops appendicitis at some point," said Caudle.

Although I was home the next day, I was out of commission for a couple of days. No gym, or lifting for two or three weeks, I can't ride my bike to work and when I came back to work that following Wednesday my boss said it was okay if I waited until after rush hour to take the train. That's because I was horrified a fellow commuter or worse yet, a small child on a scooter might bump into my belly.

Mary Pittman, a Vero Beach Fla., ER and PACU (the place people wake up from surgery) nurse for 33 years, made an interesting observation.

She says there are far more men who end up with ruptured appendixes than women.

"I attribute this to the male "I'll-be-OK. I'm-not-going-to-the-doctor/hospital" syndrome," said Pittman.