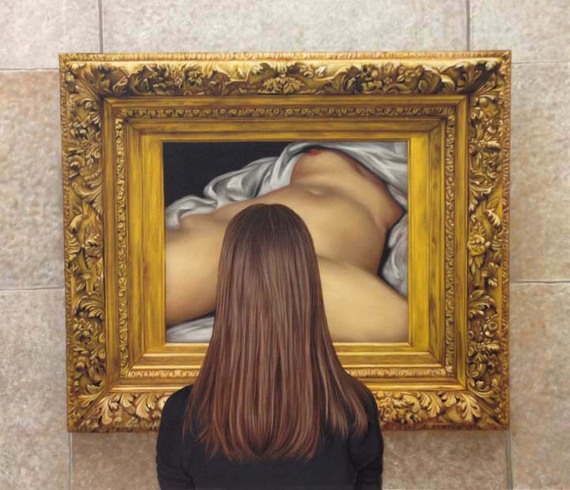 "The End of the World," by Marc Dennis, oil on linen. Courtesy of the Hasted Kraeutler)

No, that's not the opening line of a new joke, but rather the title of artist Marc Dennis's latest show, which opens Friday, November 8th at Hasted Kraeutler Gallery in Manhattan. "I love the title of the exhibition," mused Amy Phelan, a longtime collector of the artist's work. "It's the perfect representation of Marc's sense of humor."

An Artist, a Curator and a Rabbi Walk Into a Bar is an amalgamation of not only Dennis' wit, but but of his superior, hyper-realist eye. "I think all of the paintings in this exhibition are Marc's strongest to date," said Ms. Phelan. "Marc has a keen understanding of art history and contemporary culture and has an affinity for injecting artistic and social conventions with a healthy dose of cheeky humor." 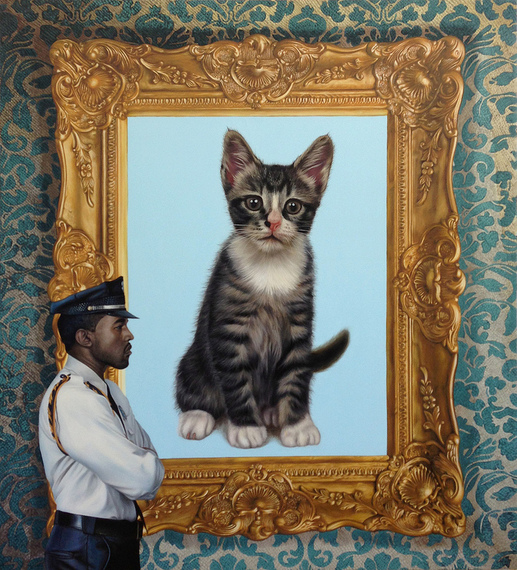 "The Measure of All Things," 2013. by Marc Dennis. Courtesy of the artist/Hasted Kraeutler)

On the eve of his show, the artist broke free from his Brooklyn painterly confines to talk about his upcoming show.

How the hell did you come up with that title?
I achieve my most effective results with cleverness, irony and humor. I've always felt that humor makes the mysterious and sometimes tragic magic of the world palpable. The meta-joke as it is known, is a joke within a joke, referencing tropes, stereotypes and icons. The popular joke about a priest, a minister and a rabbi walking into a bar comprises a series of lies that tells a kind of truth. These types of jokes are subliminally about human behavior, identity and the relationships we form with the world. They offer clear reasoning juxtaposed with historical evidence, which intersect and sometimes collide with general associations and social context. This is very much a part of my modus operandi. The joke also originates outside a bar then moves inside, engaging us in the idea of time passage. And much like my work -- we are either approaching the painting or moving away from it. Left purposely without a punch line, the title lends itself to the idea of an endless narrative in which anyone can fill in the blanks and take the concept in any direction or context. The meta-joke is about isolated moments of heightened reality that suggest the tone of what will follow just as they carry forward the tone of what preceded them. With that, and as a Jewish artist, I believe the title of my exhibition works quite well. 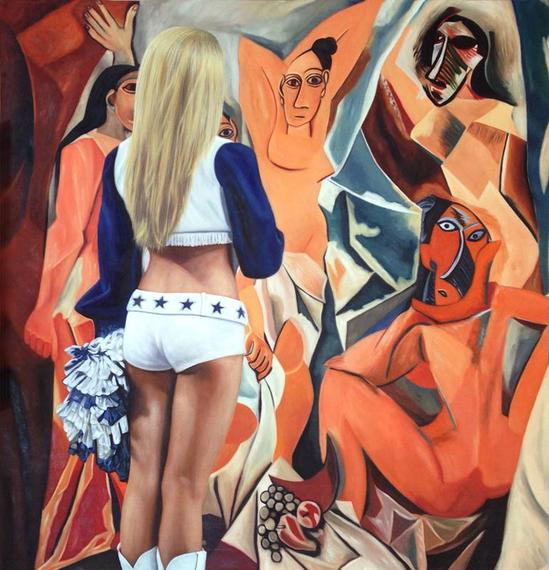 "Necessity of Judgement," 2013, by Marc Dennis. oil on linen. Image courtesy of the artist/Hasted Kraeutler

What's your favorite piece in this exhibition and why? (Don't say, 'that's like asking me which of my children is my favorite... they are all the best.')
Hmmm... well if I have to pick just one, I choose "The Necessity of Judgment", the painting of the Dallas Cowboy cheerleader looking at Picasso's Les Demoiselles d'Avignon. My goal was to paint a staged and slightly subversive image of a plausible situation about the search for meaning and purpose as to the sanctity of art. I also wanted to make a painting that was all at once satirical and sincere, artificial and exaggerated, and though full of personal symbolism was loaded with public pomp. This brought me to the intersection of art lovers and sports fans. Intrigued and challenged by painting an image that offers a polarity of emotion and consideration -- one that evokes love for both art and sports, my idea for this particular piece comes from the notion of art as sport -- that we as viewers, in essence are indeed cheerleaders. I wanted to work with an already established iconic work of art -- one that rocked the art world and changed perceptions but also one that provoked displeasure and passionate outcry. Picasso's Les Demoiselles d'Avignon portrays five nude female prostitutes, each one depicted in a somewhat disconcerting and nontraditional "feminine" manner, yet they are prostitutes, the very essence of which is to attract. This painting caused outrage and critical evaluation and interpretation. I find this paradox to be parallel with the notion of beauty in painting, of which is entirely subjective. The cheerleader may be viewed as actually standing in front of the Picasso or she may serve as a metaphor, a surrogate for our own viewing pleasure. It's all in the eye of the beholder... or beerholder.

What's your favorite color?
I can answer this quite easily. My favorite color is Tiffany & Co. blue or robin's egg light blue, or hotel pool blue or whatever else it might be called. It soothes me. It makes me feel good. It has a kind of aura to it -- almost like being in a trance. It also reminds me of my childhood because it was the color of the tiles of our in-ground swimming pool we had while growing up in Puerto Rico for four years. I distinctly remember swimming underwater feeling empowered by the glow of the tiles glow on a sunny day and believing I was a fish.

Talk about your side job teaching, and how that affects your painterly endeavors.(Dennis is a tenured professor of art, an independent Holocaust scholar on the subject of clandestine art made by prisoners inside Nazi concentration camps.)
As a college professor I often feel blessed to be able to not just instruct students how to draw and paint, to observe the world and appreciate art but also to live a more imaginative life and to embrace their own creative impulses. It gives me more hope in the future to see them achieve successes in the studio. Students also make some very interesting and insightful comments during group critiques that sometimes influence my own thinking. I enjoy hearing them talk about their ideas and artistic intentions and motivations, witnessing their successes and feeling their joy and pain. I teach like a coach, I'm told. I remind them often that the word "pain" is in the word "paint."