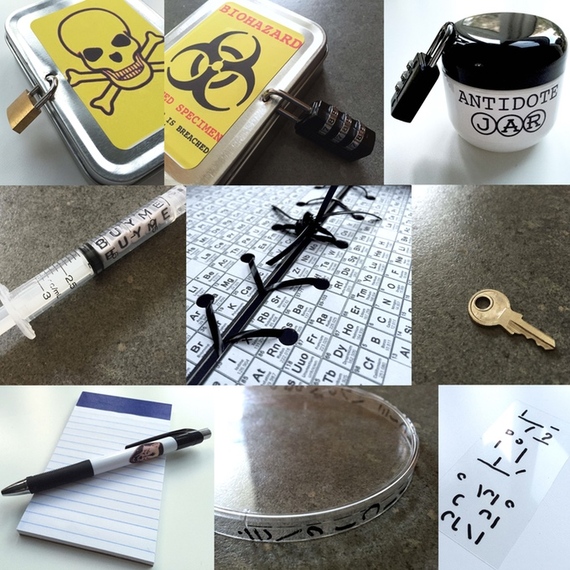 You know that we dig escape rooms here at Turnstyle, and that we are also into crowdfunding projects, so when we heard tale of a Kickstarter project that promised to put an Escape Room in a box, you know that we had to find out more.

Juliana Patel and Ariel Rubin are two stay-at-home moms who met at a game night during their pregnancies at Patel's weekly game night. Patel had become obsessed with escape rooms.

"The first time I did (an escape room) it was a chance to completely disconnect from everything," said Patel. "You're timed so all your focus has to be on going as fast as you can so you make it out on time. You put your phone away and there's things that engage your mind in such a way that you have to be present and focused on what's in front of you."

The subsequent meeting of the two moms led to Patel bringing Rubin along on an outing and soon Rubin was hooked as well. Yet heading out to the latest escape room can be a tricky proposition even when you don't have infants and toddlers demanding attention. It can also get pricy.

"We'd run out of Groupons to escape rooms," said Rubin, "and we were just like 'well we should just host one at home, someone is probably selling this. We'll go and buy it and we'll do it as a game night instead,' and we couldn't find one."

"We were actually shocked that it didn't already exist in the world, said Patel, "because escape rooms are so popular and only becoming more and more popular by the day."

Undaunted the pair began developing their own at-home escape room, using Patel's weekly game night crew as guinea pigs and inspiration for their experimentation. The result led to this Kickstarter project, which has been racking up rave reviews from skeptical escape room fans and board game enthusiasts alike. They call the game Escape Room In A Box: The Werewolf Experiment.

"There's locked boxes, and surprises and hidden twists and turns. All the drama and excitement of an escape room, but now you don't have to leave your house. Which is awesome," said Patel.

The story of the game goes like this: Dr. Cynthia Gnaw has shipped you a box that--upon opening--releases a mysterious, invisible vapor which will turn you into part of her werewolf army in 60 minutes if you don't solve the puzzles within the box. (Note: there is no vapor, nor will you actually turn into a werewolf if you fail to solve the puzzles.)

Along with being the first--that we know of--at home escape room game The Werewolf Experiment is part of a growing trend in board games of "consumable" or "destructible" games. Entries in the genre include Pandemic Legacy and Risk: Legacy, which evolve as players return to the game until the contents of the boxes are all used up. With that in mind Patel and Rubin have come up with a way to get extra mileage--and a little extra cash--out of the game.

"The second time we will be selling a refill kit, and you can put the box back together and you'll get a host script and you will actually play as Doc Gnaw," said Rubin. (Kickstarter backers will be getting the refill kit for free.)

She also notes that for the theatrically inclined that's where a little acting and immersive theater comes in. Both of the creators have theater background form high school through college, which doesn't come as much of a surprise to this reporter. There's something inherently theater nerdy about escape room games. (I say this as someone who holds a Theater Arts degree.)

The Kickstarter has been a wild success for the pair--already having racked up over 400% of its target in pledges with a week left to go as of this writing. The duo has already had to modify their fulfillment plan, but they've been heeding the warnings of previous first-time creators and have given themselves what they believe to be more time than they need to hit their intended delivery date. The scale of the success has also made it easier, Rubin told me, to source certain components.

Escape Room In A Box: The Werewolf Experiment wraps up Friday March 4th, and is scheduled to ship in Feb of 2017.

To find out more: I sat down to speak with Patel and Rubin as part of a podcast series on immersive entertainment called No Proscenium (iTunes, RSS), which will be released this Friday.