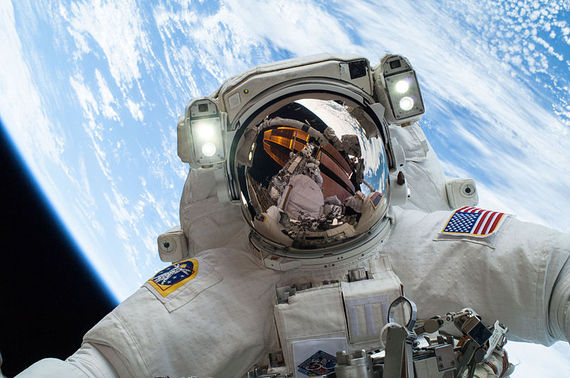 We are already transhumanists: A NASA astronaut in space -- Photo by NASA

Recently, a number of religious transhumanists -- those who advocate for using science, technology, and religion to improve the human being -- have reached out to me, asking whether I plan to maintain my atheist position as both an outspoken transhumanist and a 2016 U.S. Presidential candidate. Frankly, it's a good question, since America is mostly a Christian nation with mostly religious politicians -- and to make real headway in U.S. politics, it's going to be difficult to do it as a declared atheist.

Even if some of my friends and political advisors suggest it, it's too late for me to do a U-turn on some of my atheistic positions. I've written too many pro-atheist articles and given too many secular-themed speeches. And recently, I helped start the world's first atheist orphanage, which via crowdfunding became fully funded in only 29 hours.

However, I decided to write this bridge-building article because one Christian reverend, Christopher Benek, called me and told me he believed America was ready to start merging Christianity with transhumanism. Some people, including conservative Christians, may find that asinine, but I tend to agree with the reverend. I've said this before: In order for existing formal religion to survive in the 21st Century, it will have to bend and evolve to fit coming technological advancement. Technology is simply too powerful and all-encompassing to not make one's beliefs work with it. Robot pastors, churches in Virtual Reality, debates about a Jesus Singularity, and saving Artificial Intelligences via Christ's redemption are likely going to be a meaningful part of this nation's future, whether religious old-timers disagree or conservative writers like Wesley J. Smith make light of it. Smith recently wrote in the National Review, "Every once in a while, when the world is too much with me, I turn to transhumanist advocacy for a little entertainment."

My own history with religion is varied. I was raised a Catholic (even went to Catholic elementary school). In high school I was more interested in general Christianity, as well as Buddhism. Later, I partially majored in religion in college and even took a month to read the Bible cover to cover. In fact, my departure from Christianity began in earnest the moment after I finished reading the Bible. I was 18-years-old, and it simply contained too many contradictions, too much violence, and too much foreshadowing of the future -- a future that certainly didn't anticipate humans merging with machines, artificial super intelligence, post-genderism, brain implants, robotic hearts, ectogenesis, telepathy, or the multitude of bizarre transhumanist technologies on the horizon (or already here). That said, many parts of the Gospel of Jesus, broadly interpreted, remain an important part of my moral code. Clearly the intent of Jesus to get in touch with the spiritual possibility of the universe was a major improvement over the strict and ritualistic religiosity of the time.

However, despite my admiration of Jesus and some of his teachings, it's incredibly hard to see how anyone can reasonably believe a human being came down to Earth and died for the world's sins, or that a loving omnipotent God could send people to an eternal hell of suffering, or that billions of non-Christians in the world might never get to heaven because they haven't accepted Christ into their heart. The key word in that last sentence is 'reasonably.' I agree with many neuroscientists that it's our ability to reason that makes human beings so special. Without it, we would be living like our primate cousins and would never have come to understand the complexity and power of the human mind -- or its incredible potential.

As a transhumanist, I stand behind reason, first and foremost. Most transhumanists feel the same way. Our code belongs to science and the scientific method. We require proof, before anything else. We do understand that our so-called 'proof' can always change, by new discoveries. But proof, which only a reasoning human being can verify through logic, measurable evidence, and scientific repetition, must occur. Otherwise, we'd all be able to believe anything and everything unconditionally, regardless how silly, wrong, or illogical it might be. And that would lead us to a place where we are unable to discern truth or prove it -- a place where we are left to rely on faith. This is the overarching component of Christianity and other Abrahamic religions -- a thing which most Americans have broadly accepted. And it will be a key issue that Christians must reconcile with as our society becomes more science and technology bound -- fields which rely on reason.

Moving forward, I welcome Christians and their worldviews to embrace transhumanism. There is much verse in the Bible that supports humans improving themselves -- which is the essence of transhumanism. So, ultimately, we all have much in common. And I also welcome Christians to seek ways to apply their religious views and biblical verses to transhumanist philosophy and ideology, which will result in a better, healthier, more prosperous America.

Transhumanism is not a religion, nor is it in competition with religion. It is simply a mode of being that embraces evolving the human being with science, reason, and technology.