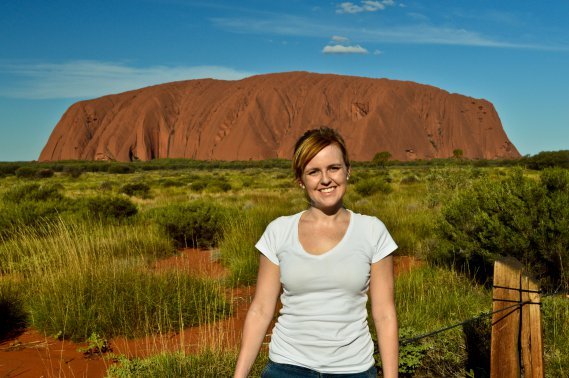 As I wheeled my luggage out of Ayers Rock Airport, the colors struck me.

Everything had been cast in a primary hue, with the saturation ramped up: the soaring blue skies, the green grass, the red desert. I was in the "red centre" of my own country. And yet I gazed around in awe of its foreign terrain, as if it were an alien landscape. Uluru/Ayers Rock hovered on the horizon, 25 km away but clearly visible over the flat planes.

It was a blistering 35 degrees Celsius, but I was so preoccupied by my new surroundings that I barely noticed the heat.

As I started the ignition of my rental car, my nerves tingled. 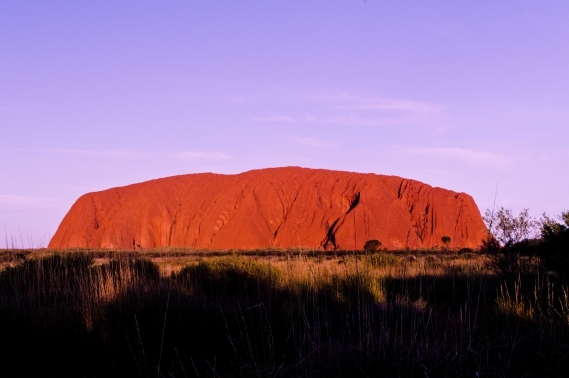 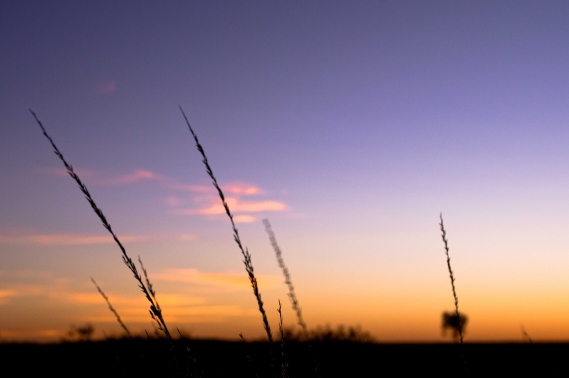 2. Grass seeds on the horizon at Uluru. 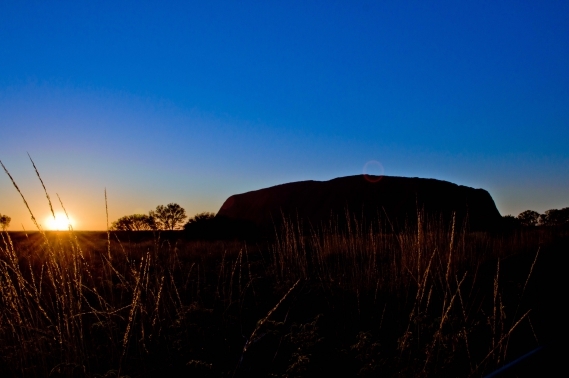 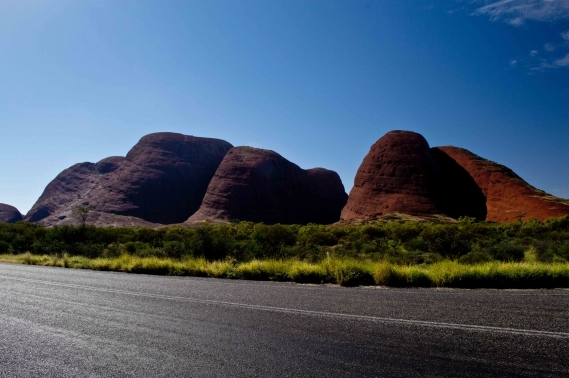 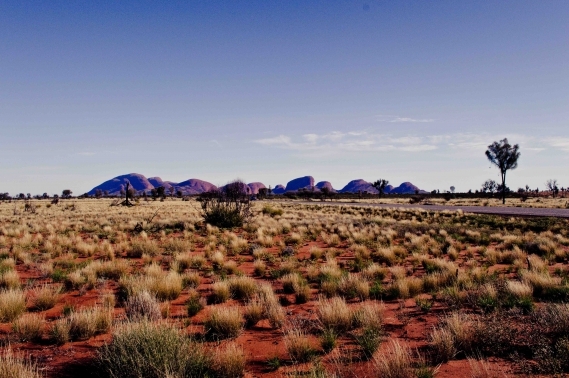 5. Kata Tjuta on the horizon. 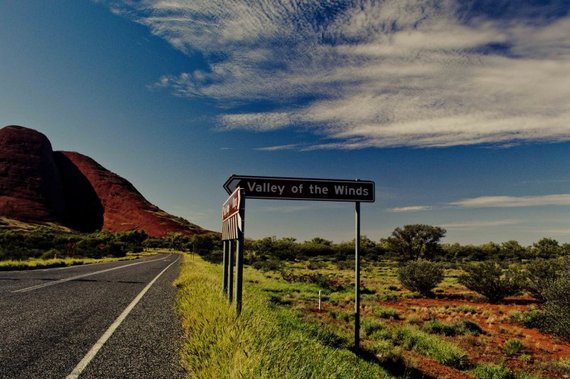 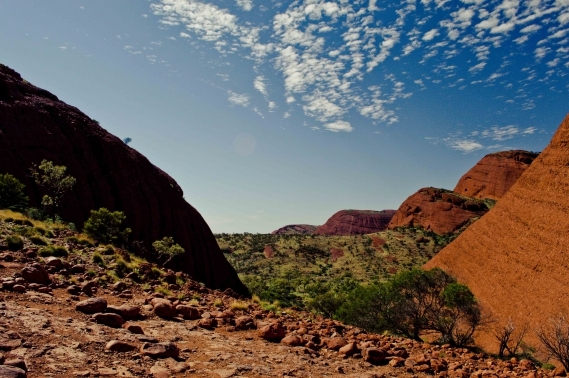 7. Desert landscape during the Valley of the Winds hike. 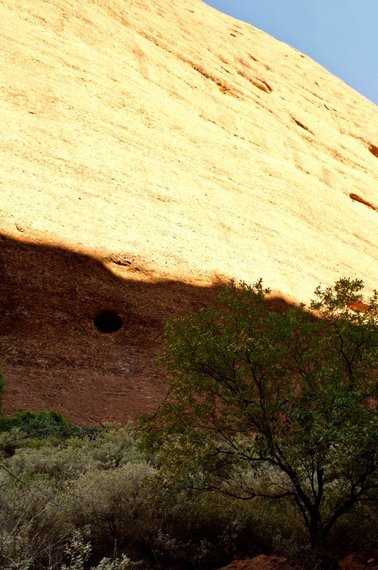 8. Rock face seen during the Valley of the Winds hike. 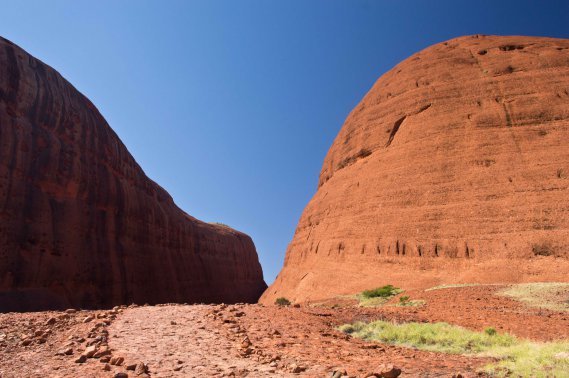 9. Desert landscape during the Valley of the Winds hike. 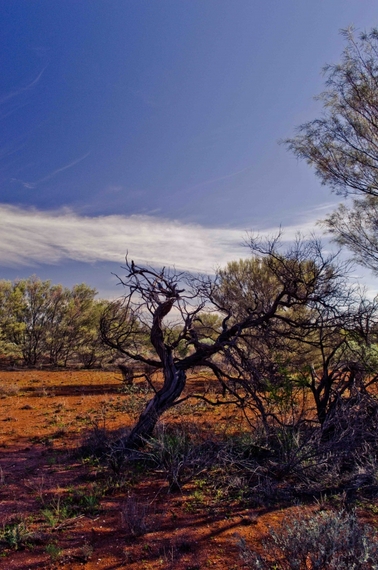 I was worried about getting lost, hitting a kangaroo with my rental car, running out of petrol in the middle of nowhere and dying of dehydration or meeting an outback serial killer, like the one in the terrifying Australian movie Wolf Creek.

Essentially, I was concerned about all of the usual things that city-slicker Australians consider to be the dangers of going into the desert. Despite Australia being 18 percent desert, and how much we love playing up how dangerous our country is to tourists, most of us are pretty happy staying on the coast. Only 3 percent of our total population can be found living in desert regions.

Always one for the dramatic, it wasn't entirely a surprise that most of my fears turned out to be pretty irrational.

Far from dangerous, the area around Ayers Rock Resort and Uluru-Kata Tjuta National Park only has a few main, easy-to-navigate roads, lots of other cars and everything is well sign-posted. There are plenty of kangaroos and emus around, however, particularly at dusk and dawn. So care on the roads is definitely needed.

One of the key attractions of visiting The Red Centre is, of course, to see Uluru/Ayers Rock. The iconic rock is made out of orange sandstone and spans approximately 10 km. The world heritage site is owned and administered by the Aborigines, to whom the rock has great spiritual significance.

It's disrespectful to the Aborigines to climb the rock, but a few years ago most tourists would do it anyway. Thankfully, now most people opt not to climb the rock out of respect for the local indigenous people's wishes.

I went to see Uluru at sunset on the first evening of my trip. It was just incredible. As the sun dips down behind the iconic rock, Uluru lights up and starts to glow an incandescent, rose gold. The glow fades slowly as the sun slips behind the horizon and, with the diminishing light, stars start to burn pinpricks in the clear sky, intensifying as the night deepens.

The following day I returned to experience the rock at sunrise. It was spectacular. The planet Venus twinkled to the left of the rock before the sun rose, and to say that it was a unique view of the planet would be an understatement. Venus melted steadily into the sky as the sun emerged from behind Uluru, covering the landscape in light.

That afternoon I drove out to see Kata Tjuta, a large group of domed rock formations. Once there, I did the Walpa Gorge Walk and the Valley of the Winds Walk. Both offered gorgeous, scenic views and were pretty easy walks, despite the heat and swarms of flies.

The flies in The Red Centre are a force to be reckoned with. As a result, one of the most fashionable trends in the area is to wrap your face up in a fly net before going outside. My pride just couldn't take that, so I opted for an incredibly strong insect repellent instead. It was so strong that it ate some of the plastic off my camera's buttons when I sweated it off while taking photos.

On the last night of my stay I did the Ayers Rock Resort Astro Tour, which an awe-inspiring experience. The group was taken out into the desert and given an outdoor astronomy class by a passionate astronomer. He brought the sky to life for us with two high-powered telescopes, iPads and his enthusiasm to talk about the universe.

The next day, I returned to Sydney's milder temperatures exhausted, with a deeper tan, a new appreciation for the Northern Territory and a smile on my face. Some of my friends thought going to Uluru by myself was a bit random, but I think it makes for an ideal "alone" getaway. The lack of companionship and chatter allowed me to really absorb and meditate on the beauty that the unusual landscape had to offer. I know that I'll be back to the Top End for more, one day.

Dominique Kane is a freelance journalist and photographer based in Sydney, Australia. Follow her blogging from Bondi at www.dominiquekane.com. Interested in travel photography? Sign up for Dominique's free eguide here.


More:
PhotographytravelingAdventureAstronomydesert
Newsletter Sign Up
An essential daily guide to achieving the good life
Subscribe to our lifestyle email.
Successfully Subscribed!
Realness delivered to your inbox