Anyone who has ever worked on a technology startup knows that conflict is unavoidable. Engineers possess competing views on how to develop a new feature, co-founders debate overall strategy, and everyone has different perspectives on the percentage of ownership to which they believe they are entitled.

Conflict is often perceived as a threat because, when poorly managed, it results in delays, frustration, and damaged relationships. In fact, though, conflict presents an opportunity to leverage differences to generate creative solutions and improve relationships. This first in a series of posts on startup negotiations shares one approach for overcoming disagreements effectively.

One of the most powerful elements in any negotiation is the concept of fairness. No one likes to feel like they have been taken advantage of or treated unfairly. The fairness of internal team agreements is critical because each one sets a precedent for future deals. It's important therefore that co-founders use standards of legitimacy, or objective criteria and data (e.g., precedents, market standards, studies, third-party views) to determine whether an agreement seems fair.

One of the most effective ways we've applied the notion of legitimacy at Company Connector to resolve disagreements is to agree first on the objective standards to take into account without knowing what our data investigation efforts will reveal. When we co-founders remain at loggerheads despite sufficiently exploring different perspectives and generating possible solutions, we decide on the standards we'll use to make a decision (e.g., the perspectives of our advisors), then collect the relevant data (e.g., four of five advisors say they favor one approach over the others). The decision is essentially made for us.

Think about a disagreement you and your co-founders might have over product development. Rather than debate endlessly what feature to develop or how to develop it, consider agreeing that the results of A/B testing will determine what move you make. Alternatively, agree to ask your investors where they stand. Or decide to solicit feedback from your users to make a decision. 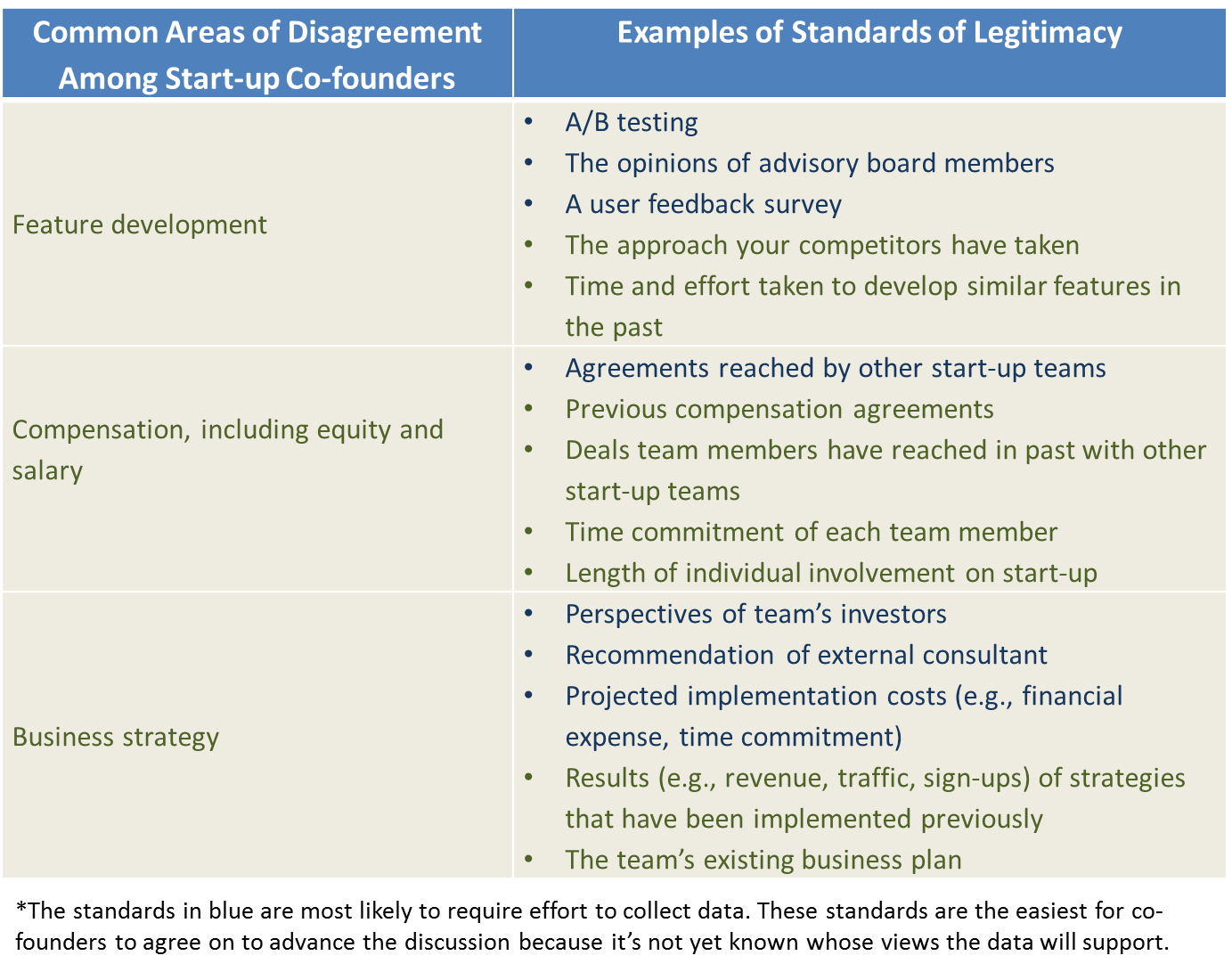 The aforementioned standards are more valuable than others, such as the approach your competitors have taken, because they require some effort to collect data, and it's unclear which co-founder's perspective will be supported by that data. (See the standards highlighted in blue in the table for additional examples of standards of legitimacy that your team can use to reach interim agreements to advance the discussion.) This makes it easy to agree on an initial plan on the data to collect, breaking the cycle of arguing about each party's conclusions. Even when one party learns that the data that was collected does not favor their preferred solution, they are more inclined to view the decision as fair and accept it because of the earlier agreement to use those standards.

For more on these ideas, consult "Getting to Yes: Negotiating Agreement without Giving In" and the consulting firm Vantage Partners (www.vantagepartners.com).