More than two thousand years after Aristotle, a growing movement is bridging his division between oikonomia - an economy that supports the common good - and chrematistike - making money.

The framework is an attempt to overcome the confusion over whether capital is a means, or the goal. In oikonomia, money served as nothing more than a means to an end: holistic well-being and the comfort and security it brings. Through chrematistike, however, money turned into a goal in and of itself, wrapped up in the ideology of generating profit and growth, much like in capitalism today. Between these two approaches there has always been a wide gap and painfully little room for common ground, since the objectives are so very different.

Measuring economic and business success in terms of financial bottom line alone does not take into account the costs to society incurred in generating profits. For example, costs to the environment to democracy and human dignity -- to name just a few. The systematic pursuit of strictly financial profits fosters the narrow, short-term, bottom-line-focused vision that's crippling our market system, leaving it unable to serve companies, workers or consumers as it should - let alone the planet.

The concept of promoting general welfare is embedded in the constitutions of sovereign nations around the world -- including the constitution of the United States, where it is stated in the preamble. The pursuit of profit and money purely for money's sake is mentioned nowhere. Yet the contradiction persists and the gap it has created keeps widening.

Clearly it's time to reconcile these two systems, and breath a soul back into economics while re-embedding the economy into our cultural value system in a way that elevates social responsibility and the common good over profit.

With this in mind, a dozen companies in Austria launched, in 2010, an initiative called The Economy For The Common Good (ECG). This idea of a complete and coherent, alternative economic model has since grown into a veritable movement geared toward repurposing economic activity so its fundamental objective is to increase the wellbeing of the population at large as well as the integrity of our planet rather than simply maximizing profits. Since then, it has spread to almost 50 countries and gained the support of 2200 companies and 200 local chapters that work with businesses, governments, universities and civil society.

The movement has recently achieved a first major political success at the European Union level: the EU's Economic and Social Committee has approved an opinion paper requesting that the EU move toward incorporating the ECG into the Union's as well as its member-states' legal frameworks. The paper has the backing of 86% of the members of the Committee.

The centerpiece of the ECG model is the adjustment of success-measurement at every level of the economy bearing in mind the constitutional goal of supporting the common good. In the present system, economic success is measured in relation to means (money) and its accumulation. As monetary indicators, Gross Domestic Product, financial profit and return on investment provide a one-sided assessment of economic activity. They don't account for the economy's true purpose: the satisfaction of human needs, quality of life and the fulfillment of fundamental values. In other words, promoting common good. 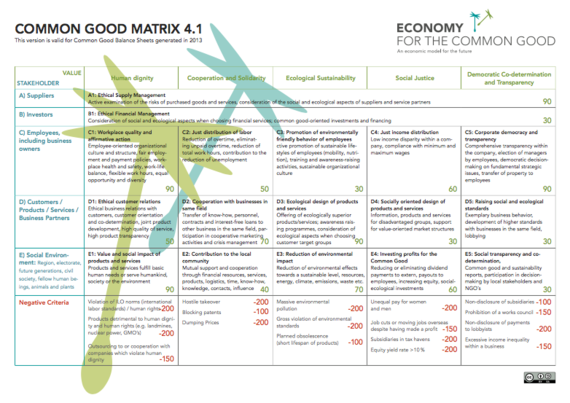 To be downloaded here

So far, 400 European businesses have started using the Common Good Balance Sheet and its grading system which awards credits and demerits depending on each company's activities impact the common good. A number of towns in Spain, Italy and Austria have also decided to become Common Good Municipalities with the support of regional parliaments.

The companies and towns rate their activities according to a list of indicators, and the results are examined by external auditors. Each one can reach a maximum of 1000 points. Up until now the average is around 300, which shows that there is still much room for improvement among companies across the board.

If all companies scored 1000 points, we'd have no poverty and unemployment any more, an excellent environment, gender justice, peace, and a well-working democracy.

These companies are using the balance sheet out of sheer interest, without any incentive - although consumers, investors, skilled workers who look for meaningful employment as well as the media public are paying increasing attention to this new business approach. However, ideally an incentive system would be put in place rewarding good results with tax reliefs, lower tariffs, better loan conditions and priority in public procurement among other things.

For example, on the trade front, rather than a blanket trade agreement on a country-by-country or regional basis, the U.S. we could require individual companies seeking to sell goods within its borders to present strong Common Good Balance Sheet results. Failing these, tariffs would be applied, increasing progressively as performance declines.

Companies disrespecting international labor standards -- say, through child labor or poor health and safety conditions -- or ravaging the environment would be hard hit. So would those engaged in any form of dumping, from wages to taxes.

Ultimately, ethical products and services would become cheaper for consumers than less ethical ones, and only socially responsible businesses could survive. Non-ethical business would find themselves either forced to change or facing insolvency. The Common Good Balance Sheet would become as important as today's financial balance sheet.

Then, perhaps, chrematistike capitalism would evolve into a different, stronger system benefitting all. And Aristotle could smile down as economic and business practices move closer to the oikonomia he prefererred.