I had just turned 13 when I met my soon-to-be high school principal, Dr. Field. He stood outside, calling me his "Almond Joy" as he greeted the JV girls' volleyball team while we filed into the high school for our first pre-school practice.

"You're hard on the outside and soft on the inside," he said with a smirk. Not really understanding what he meant or knowing him well, I smiled and continued on my way. Within a few weeks, though, I was summoned to Dr. Field's office for the first time. His secretary had quietly spoken into the loudspeaker system while I was in my typing class, saying, " Mrs. Benson, is Karri Jinkins in your class today? "Yes," my teacher had replied quickly, not wanting to disrupt the timing of the typing commands: a, sem, s, l, d, k, f, j. "Please send her into Dr. Field's office," the voice had instructed.

I apprehensively tidied my desk and walked down the hall to an office where Dr. Field stepped out of his office and said, "Karri, please come in," with a arm stretched out and an open hand gesturing toward his office. He was short, about 60 years old, and wore Buddy Holly- style glasses along with loud, plaid Sansabelt slacks, from circa 1965. My mind raced. I assumed I was in some kind of trouble, since trouble was something that I knew quite well by then.

He asked me to sit down and then closed his door and offered me a chocolate bar. He had a selection of treats that, of course, included Almond Joys. I chose a Snickers bar, and he proceeded to ask me questions about how school was going, how was I doing and if I had any problems or concerns. I think I was polite and answered his questions, but I didn't confide in him any of my worries. As I looked around his office, I was impressed by his full bookshelves, and I noticed many of them had the word 'psychology' in the title. He must know a lot about that, I thought to myself.

After about 20 minutes of chit-chat, he stood up and came over to my chair and said, "Please, let me know if you need me for anything, I'm watching out for you here." I stood up but was startled when he grabbed my upper arms firmly and pulled me to him, giving me a big, firm hug. He walked to the door, opened it and said, "Thanks for coming in Karri." I slowly made my way back to my typing class with a little anxiety bubbling inside. Why was he being so nice to me? Was it okay that he hugged me like that? I knew that he was friendly with my oldest sister, Laurie, who was now working towards her master's degree and thinking about attending law school later. She respected him and I felt proud that he had chosen me to favor out of the 300 students in my school.

It didn't take long for that first meeting to turn into more frequent ones. By the end of my freshman year, I was in his office almost weekly. I was also receiving bags full of candy in my locker each Monday morning, and occasionally small gifts, too. I kept it secret and thought of myself as special. Sometimes during our talks, he would break down and start to cry. I felt sorry for him. I didn't understand why he was so sad, but I was sad too, and we bonded over that, or at least I thought we did. I began to open up to him and I felt that we were two lonely souls who had met and had finally found another person who understood their loneliness.

I was not a fan of the hugs that he gave me in his office. Over the year they had developed into longer, closer embraces that sometimes finished with a slippery kiss on my cheek, or even neck, since Dr. Field was shorter than me. During the lunch period I would often feel his eyes on me as he stood on the ramp that connected the auditorium to the ground floor of the 1970's era high school. He would watch over the lunch cafeteria and give me a discreet smile if our eyes met, which also made me feel uncomfortable.

In the fall of my sophomore year, my sister Laurie drove an hour south of Madison, WI, where she was at the university, to the local Pizza Hut where she had arranged to meet me and my other sister, Julie, for lunch. As we munched on our personal pan pizzas she asked Julie and me questions about our relationship with Dr. Field. What was his relationship like with us? Did we spend any time alone with him?

I was shocked to hear Julie's trepidation as she revealed that yes, she did spend a lot of time in his office and that he often showered her with gifts, such as even diamond necklaces and earrings, and, of course, candy. He regularly called her out of class and into his office to talk with her, gave her long hugs and sometimes kissed her on the cheek or neck, and he often cried, which made her very uncomfortable. I couldn't believe that I wasn't the sole recipient of his affections. What about all those hours I had spent in his office while he went on about our "little secret" and how special and deserving I was?

I think Laurie was disappointed and saddened by our confessions. She may have felt partly responsible. Her being the eldest of siblings, had she helped pave the path for him, since we often followed in her footsteps? Why would we have questioned his behavior when he had obviously built trust with her? Laurie declared that we must stop all communication with him at once and speak to a lawyer.

She continued, detailing how he had also given her many gifts over the years and persisted his "mentorship" of her after she went away to college. She had seen him recently and he made a bold pass at her insisting she sleep with him. She declined vehemently. He had been grooming her for years for this event, and he was angry and insulted to be turned down now.

At first, I didn't want to report him. In my mind, he had done nothing wrong: his actions were innocent and he actually only cared about me. As much as I disliked his hugs and neck kisses, I did like getting called out of class. I had grown accustomed to our weekly meetings and I enjoyed talking with Dr. Field about my problems. He made me feel important because he trusted me enough to cry in front of me and share his feelings with me. Little did I know he was just really patient, like a lion stalking its prey, waiting for the right time to pounce. It didn't take long for my trust in him--and perhaps all adults--to collapse.

Laurie announced she would talk with our parents to ensure that they'd be on board. They were shaken when they found out: Dr. Field was older and highly respected by them. He was held in high esteem by every parent and child in the school district. I began to fret about what other teachers and my friends would say.

In the weeks that followed my sisters and I spent hours at the lawyer's office recounting details of our relationship with the errant principal. We discovered that we all had close friends who were also having a "secret" relationship with him. The Superintendent and School Board didn't want to embarrass him publicly, so he was forced to resign, but formal charges were never filed to my knowledge. There were some in the community who supported us and some who refused to believe Dr. Field acted in anyway inappropriate. He was married and seemingly a custodian of the community for over 20 years. (Sound familiar?) Being a Midwest farming community, most people kept their opinions to themselves; you could only feel the opinions, not hear them.

The recent article in The New Yorker, Outcast, about Baruch Lebovits, a descendant of a rabbinic dynasty, and a prominent cantor with 24 grandchildren who was accused of molesting hundreds of boys and the recent news of Bill Cosby's alleged rapes has me reflecting a lot on this experience and my experience with trust. I hope that my 4 year old son's experiences with trust will be healthy. I talk to him often about trust and what it is, how to build it and how one loses it. I read somewhere that repairing lost trust makes us stronger and more resilient. Unfortunately trust is one of those concepts that is best understood through experience, not theory.

I never saw Dr. Field after he resigned, but by my senior year in high school, when I heard he passed away, I was sad. My mother told me recently that I even asked her if I could go to his funeral, an event I had completely forgotten, 25 years later. 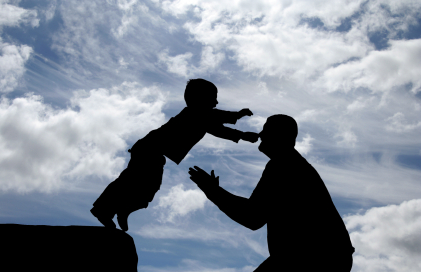 I still feel a twinge of sadness when I recall the chain of events that led to my trust and a mistrust of him. I think of how skilled he was at getting me to open up to him and how methodical he was at building trust. As Stephen Kings says, "The trust of the innocent is the liar's most useful tool."