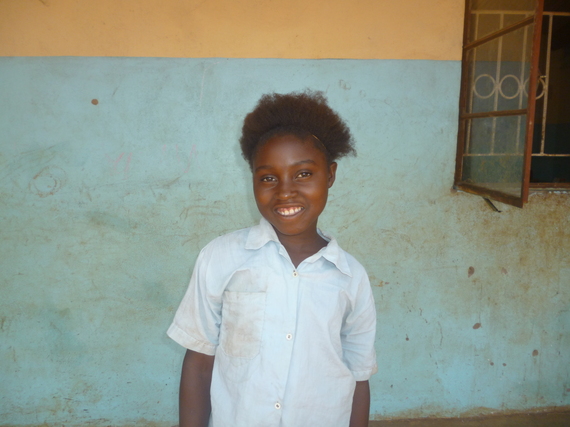 Meet Elizabeth, a twelve-year-old who walked over 10 kilometers to school and back every day. Despite her class being crowded -- sometimes with 75 children for each teacher -- and her teachers often being from outside the community, regularly overwhelmed and sometimes missing their teaching obligations -- she was lucky to receive an education at all. This is the reality of a child growing up in rural Zambia's Eastern Province. Her classes were ineffective, often having her recite back words that meant little to her without any practical applications. Frustrated and bored, Elizabeth's drive to learn unfortunately plummeted along with her school performance. Eventually, she dropped out of school altogether.

Elizabeth's story is not unique to Zambia. According to 2011 numbers from the Brookings Institute, over 30 million school-aged children are out-of-school across Sub-Saharan Africa, and even those who do enroll in primary school don't often succeed. Only 53 percent of students who enroll in primary school complete it, only 28 percent go on to enroll in secondary school. Less than 10 percent make it to university. In addition to this, poor children living in rural areas are even less likely to succeed than their wealthier urban counterparts.

But Elizabeth's story didn't end when she dropped out. A few months later, a new school opened nearby, closer to her home so she didn't have to walk as far. Her class was limited to only 40 students, half of the size of her previous school. She knew most of the teachers in the school: They were hired locally, had grown up in the community and were invested in the school's and students' success. Her teachers used interactive and engaging lessons -- sometimes employing computer technology, and other times using creative hands-on lessons to keep her interest. She got accustomed to seeing a computer and projector in her classroom, and using tablets to work in small groups with her classmates. Her attendance improved; in fact, she hasn't missed a day of class since she changed schools.

Currently, there are 10 such "eSchool360" schools in rural Zambia. They were built and are being run by a NYC-based non-profit called Impact Network. The teachers are given tablets and projectors to deliver e-Learning lessons. The schools are outfitted with solar panels to power these electronics. The eLearning curriculum, created by a Zambian organization called iSchool, was designed to move the country's educational system away from rote memorization. Teachers are also provided weekly professional development focused on helping them use the technology and enhance their pedagogical skills. Management staff travel to schools by motorbike through areas where formal roads don't exist.

I learned of these schools and of Impact Network through a chance meeting in 2011 with the organization's co-founder Dan Sutera. He impressed me so much with his mission to revolutionize learning in poverty stricken countries and indeed globally that I donated a school to be built. It's surprisingly inexpensive to build a school in Africa. For $25,000 you can build a school and operate it for a year, including teacher salaries. I never did anything like that before. Sure, I've sponsored children through World Vision over the years, but this was different. I felt like I was really getting my hands dirty and making a big difference in the lives of many kids. Later, in 2013 I joined the organization's board.

You don't have to make major commitments like that to make a real difference. And you don't have to go rogue either, as illustrated in this awesome Follow the Frog video. Sponsoring one eSchool 360 student is a mere $36 per year -- which includes the teacher salaries, the technology, school supplies, solar panels, maintenance at the schools, management and oversight across the system, motorbikes, everything. That's pretty affordable.

Or you can donate your time, bringing your skills to bear on whatever projects interest you. For example, for years I donated my time and expertise in online marketing and SEO (search engine optimization) to the Carter Center. I simply called them up one day after hearing an interview with President Carter on SkyRadio on a United flight. I was so touched by his mission to wage peace and fight diseases (such as Guinea worm disease) in Africa that I offered my services pro bono. Happily, they took me up on my offer for a number of years.

You may be asking: why Africa? Or more specifically, why Zambia? For the Impact Network, Zambia is a special place with special people. In 2010, the World Bank named the country one of the world's fastest economically reformed countries, and US dollars go a very long way there. Sutera's connection to Zambia started on his first trip there, when he met his co-founder David Seidenfeld. For years, Seidenfeld had worked in the region, volunteering for the Peace Corps, doing PhD work, and building a school with the help of his colleague, Mike Weiss. Given Seidenfeld's close ties to that community, he and Sutera decided to start Impact Network to bring quality education to rural areas there.

For me, Zambia held special significance because I had just made a trip there earlier in 2011 prior to meeting Sutera. I was on a group trip with the Platinum Partnership, which is affiliated with personal development guru Tony Robbins. As part of that trip, us "Plats" spent a day volunteering at a school in Livingstone. It felt amazing to make an impact that was tangible and immediate, through simple things like repainting classrooms, rebuilding desks, repairing doors, and providing supplies to the children. Some volunteers on their own volition went into town and bought toys, clothing and so forth for the children and brought that back to the school.

I'm happy to say that this very same school in Livingstone is going to be outfitted for eLearning in early 2014, thanks to a partnership between Impact Network and the Anthony Robbins Foundation that was forged after I introduced the two organizations to each other. It's amazing how much of a difference one can make simply by making an introduction!

Every child deserves access to a quality education. Together, let's all help provide it, one student at a time.