The Senate voted on Tuesday to start talks with the House about a compromise highway funding measure. Lawmakers are facing a Nov. 20 deadline for renewing federal infrastructure funding. Both chambers have passed bills that would guarantee at least three years of highway and transit spending, and the Senate voted 82-7 to begin bicameral negotiations on a potential compromise.

The U.S. House of Representatives just passed their version, the Surface Transportation Reauthorization and Reform Act, STIRR, a new multi-year transportation authorization bill, by a vote of 363-64. It will refund the Highway Trust Fund, among other public projects.

This is a sea change for Congress that might have something to do with it being a Presidential election year, as we have said. The Senate bill contained three years' worth of guaranteed highway funding in July, and lawmakers in both chambers have said they are eager to get to conference.

The good news is that it will prolong this economic recovery from the worst downturn since the Great Depression. The highway bill approved by the House last week calls for spending $261 billion on highways and $55 billion on transit over six years. The legislation authorizes highway funding for six years, but only if Congress can come up with a way to pay for the final three years.

So, are we one step closer to a Congress that sees the need to boost spending in order to boost jobs and economic output for years to come, as we asked in our last column? It could mean the U.S. Congress has finally seen the folly of austerity policies that shrink growth, as has happened in Europe. Or, it could be because of a so-called "emergency"; the Highway Trust Fund has run out of money.

So congressional haste to refund the Trust Fund could also be due to predictions for another severe winter that could wreak havoc on deteriorating roads -- including another Polar Vortex, perhaps. The British Guardian recently said:

...they're likely to see more treacherous cold in coming years, because the long-term forecast for the north-east and midwest calls for a spike in damaging winter storms. That means more stress on the aging, dilapidated infrastructure of older cities and suburbs; more maintenance costs for home-owners and service costs for municipalities; more disruptions of school and business schedules; more automobile accidents; more aching all around.

Hence the reason for coming to an agreement before the November 20 deadline. "Both the Senate and the House bills have many similarities that will allow for a very short conference period," Sen. James Inhofe (R-Okla.), who is chairman of the Senate Environment and Public Works Committee, said in a statement while the House was finishing work on its version of the highway bill.

With this milestone, Congress should be able to send a bill to the president's desk by Thanksgiving," he continued. "This will allow for our nation to avoid the Highway Trust Fund hitting a dangerously low level, which DOT Secretary Anthony Foxx warned would significantly affect the 2016 construction season.

Why has the Highway Trust Fund run out of money? First, in 1994, the GOP took over Congress on a wave of angry reactionary politics. Led by Newt Gingrich, they proposed repealing the last gasoline tax increase, from 1993. Though they failed at that, they stopped a new gas increase -- and ever since, Republicans have refused to allow the gas tax to go up, even to keep pace with inflation.

The result is that the current 18.4-cent-per-gallon gas tax brings in less revenue in absolute terms than it did 20 years ago -- thanks to more efficient cars and a dip in vehicle miles traveled -- and the shortfall is even bigger in relative terms because of inflation. So transportation funding is squeezed, and passage of a comprehensive transportation bill has been stymied by Congress's inability to find a new funding mechanism.

The Senate bill is "surprisingly good," said one commentator. The Senate passed its long-term highway bill in July, though their work on federal infrastructure funding isn't over. Senators voted 65-34 to approve the six-year bill, which funds federal highway and infrastructure projects for three years, as we said. The legislation would be used to pay for about $47 billion of funding for the Department of Transportation's Highway Trust Fund. Under the Senate bill, senators would have to determine by 2018 how to pay for the full six years.

This should also boost the odds of a more prolonged recovery from the Great Recession. A new Goldman Sachs prediction just out says there is a 60 percent chance this recovery could last another four years, reports Marketwatch. This is according to a team of researchers at Goldman Sachs Group, led by Chief Economist Jan Hatzius. The team analyzed a data set of developed-market business cycles and their findings were pretty interesting. Among developed economies, the average length of an economic expansion has been expanding since 1950. The longest U.S. expansion lasted 10 years, from 1991 to 2001. Before 1950, the average expansion lasted about three years, with only a few enduring for 10 years or more. 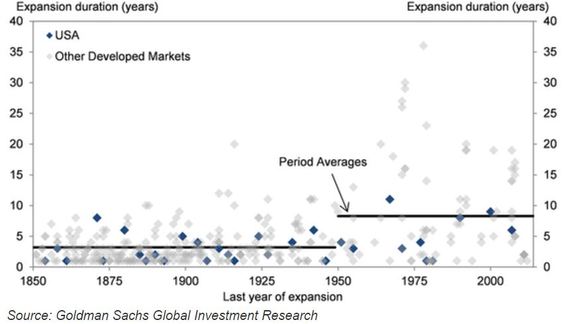 A suddenly bipartisan U.S. Congress made a start in refuting such austerity policies by first agreeing to a two year budget plan that ignores the debt ceiling. Given the possibility of another severe winter, and presidential year politics, any final version of a transportation bill will help to prolong this recovery. Austerity policies can no longer be an option with so much at stake.