There are more than 50 million refugees around the world and life for virtually all of them is difficult, made worse by a lack of access to modern energy. Chatham House's "MEI, 2015, Heat, Light and Power for Refugees" report estimates 20,000 displaced women and children die from the effects of cooking over open fires in camps. Families are spending up to 25 percent of household income just on fuel for cooking. Children, mistaking kerosene kept in plastic bottles for a soft drink, die slow and painful deaths.

I work for Practical Action, one of a group of six organisations attempting to improve lives for displaced people throughout the world through the Moving Energy Initiative.

The initiative seeks to identify the energy needs of refugees throughout the world and the costs currently incurred by agencies supplying camps and refugee populations with wood, charcoal and diesel. It will then work with the private sector, humanitarian organisations and NGOs to bring about long-term change. The other members of the initiative are Chatham House, GVEP international, UNHCR, Norwegian Refugee Council and the UK Department for International Development, who are funding the project.

Practical Action, via their consulting arm was asked to drawing upon more than 30 years' experience in providing off-grid energy in challenging and remote regions. I have been leading research into the Goudoubo Camp in Burkina Faso and putting together a tool kit which highlights key considerations in the introduction of integrated, modern cooking solutions in humanitarian operations

Goudoubo camp, is situated few kilometres northwest of the town of Dori, capital of the Sahel Region in the central province of Burkina Faso camp and hosts over ten thousand refugees. It grew out of political and military unrest that began in Mali in January 2012 and led to a mass exodus of civilians to the Sahel region of Burkina Faso. The sudden arrival of a large number of people has put additional pressure on the already limited natural resources, causing additional social, economic and cultural unrest amongst the local population.

I have been working with poor communities in Sub Saharan Africa for six years, and although I had no previous experience of life in refugee camps, I found a tragic similarity between the communities I had been working in and refugees in Burkina. A lack of modern energy hits women and children particularly hard, preventing access to good health care, walking after dark, study or work at night and the ability to start a business. It also forces women to spend hours every day collecting firewood, often under threat of personal attack and sexual assault.

No households in Goudoubo camp had access to electricity and 90 percent cooked with firewood using inefficient cookstoves. Demand for wood is speeding up the ongoing process of desertification in an area where climate change is already biting.

Public lighting is also not available in the camp, and economic, educational, social, and other activities are limited to daylight hours as a result. Only four percent of females would go out after dark. In 18 percent of households no one would leave the tent after dark.

No electricity is provided in Goudoubo except to power water pumping stations, the health centre and light the school (all supplied by diesel generators). On-site administrative offices are without power. As a result, implementing partners lack computers and even lights for their offices. Most activities have to be conducted using pen and paper or mobile phones. 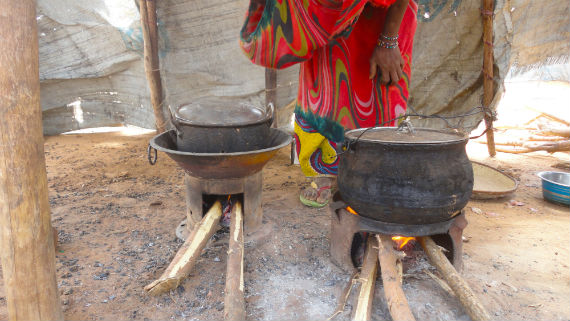 The only light coming out from shelters at night is from solar lamps (mostly donated, and used by 60 percent of the households) and the light of flashlight torches. Our interviews revealed that encountering snakes and scorpions in dark tents at night is a common and dangerous occurrence. The vast majority agreed that technical assistance was something that would be welcome "You can give me a fish or teach me to fish", said the head of the Executive Committee (paraphrasing a popular expression), "and I can tell you that even here in the desert there are many who want to learn to 'fish'."

In Burkina there are particular problems which are unique to refugee camps, such as limits on access to household finance and controls on movement and resource use. There is also the problem of governance of displaced people by host communities, and increasingly a dependency culture that inhibits self-reliance and constrains sustainable solutions. On the other hand many issues aren't restricted to the camp, but to the whole country. Burkina Faso is being dependent on fuel imports, LPG gas is not widely available for up to three months and alternative fuels like wood are in high demand nationally. Only 4 percent of rural population in Burkina Faso has access to electricity and 93 percent still cook with solid fuels (firewood and charcoal). Clearly some of the solutions for refugees will also help host communities.

The initiative is also calling for private sector approaches to be transferred to the camp setting, with displaced people empowered to become economically productive consumers, limiting subsidies and donation that are ultimately not sustainable. In doing so, we hope to help bring an end to the cycle of poverty which envelopes many camps, and enable millions of people to take back some control of their lives and save humanitarian organisations millions of pounds.