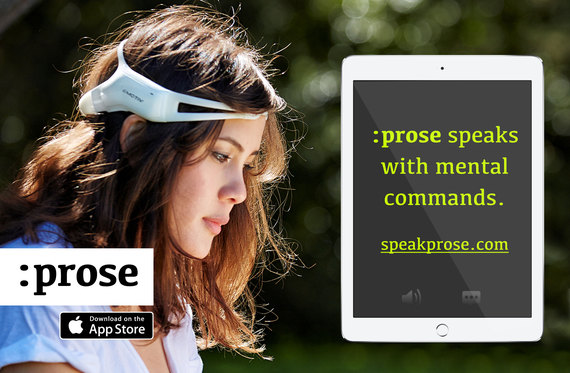 Smartstones, Inc., a company taking great leaps in improving communication technology, is today releasing a new product that will directly improve millions of lives. GlobalMindED is proudly committed to supporting the innovative efforts of companies like Smartstones, whose products and services increase access, equity and opportunity for people of all backgrounds and abilities. Smartstones' new development impacts not only those with communication challenges and their families, but also serves to democratize education and the exchange of information.

Since 2013, the existing application :prose™ has allowed nonverbal people the ability to "swipe to speak," "tap to speak," and "gesture to speak" with iOS devices and their own Touch™ device. :prose is the de-facto standard for nonverbal sensory communication. Today, Smartstones has taken their work even further, in the form of breakthrough "think to speak" technology. Using brainwave commands and a wireless connected EEG headset from Emotiv, the technology can send a "thought message" to anyone via push notification.

"There are hundreds of millions of people in the world affected by various communication challenges, including autism, ALS/Lou Gehrig's disease, cerebral palsy, Parkinson's disease, strokes, brain and spinal cord injuries--and many are looking for greater independence, social inclusiveness, self-expression and to be understood," says Smartstones Founder and CEO Andreas Forsland. "Communication is the most important part of the human experience, and we want to ensure every person has the ability to express their most basic needs." With 2.3 million nonverbal autistic children in the USA alone, and over 70 million on the autism spectrum worldwide, everyone has a unique need when it comes to a communication interface.

Andreas came up with this revolutionary idea when tragedy befell his own mother. His mother, then 70 years old, developed pneumonia which eventually led to renal failure; the doctors put her on life support, and she spent several weeks in intensive care, unable to move or speak. Serving as the main point of contact between her, her doctors, lawyers, and long-distance family and friends inspired him to find--and when he couldn't find one, to create--a tool that would allow anyone to receive and transmit brief, but absolutely vital, messages when communication is otherwise impossible. Thankfully, his mother recovered; Andreas continued his quest, all the while building on his experience as a coach and mentor to entrepreneurs. Andreas attended Startup Weekend just over a year later to present his solution.

How It Works:
For people with Autism Spectrum Disorder and other communication challenges, communicating verbally with others can be difficult or impossible. Traditional Alternative and Augmentative Communication (AAC) apps use pictogram-based approaches which, while versatile, can take months or even years to fully learn. :prose works by translating sensor data such as touch, motion, and now thought gestures, into spoken phrases. The integration of EEG technology makes :prose accessible to even more people, including those with motor-skill inhibiting conditions, who may find touch gestures difficult to perform reliably.

Recently, Smartstones worked alongside PathPoint, an organization that provides services to over 2,000 individuals with developmental, psychiatric, and physical disabilities to test the technology.

"People have been trying to get neural devices to speak for decades," said Gil Trevino, Assistive Technology Manager at PathPoint. "I'm happy to share that Smartstones has done it. One of our patients with severe disabilities is able to control :prose with her mental commands. Within minutes she was speaking several phrases aloud, compared to years of training with other technologies. She became a whole new person when she heard herself speak."

Smartstones has an official partnership with Emotiv to provide the wearable EEG head-set. "Emotiv is incredibly proud to be involved in the :prose program and to be providing the wearable EEG component, said Nuri Djavit, Emotiv Chief Marketing Officer. "From the start, our mission has been to advance our understanding of the human brain and to find ways to improve the human condition--especially for those facing adversity."

The app is available for $29.99 (50% off during the month of April in recognition of National Autism Awareness Month) and integrates with a range of devices. GlobalMindED is delighted to connect with anyone opening opportunities for different populations, and we applaud Andreas for his groundbreaking innovations.