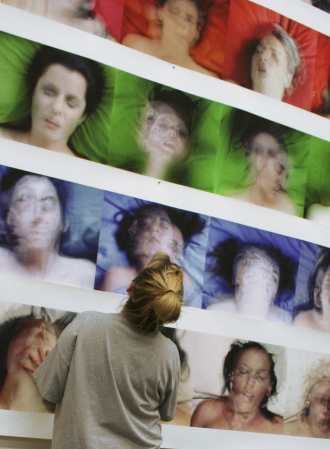 Kiki Seror's work vibrates actively between concepts of seduction, sexuality, privacy and voyeurism, engaging herself and the viewer in moments of intimacy and surprise. She taps into the use of surveillance and technology and enters the world of online sexual platforms from chat rooms to porn sites, all with the eye of a painter and with the inquisitive nature of a pioneer. As an actual trailblazer in the realm of digital art, Kiki is relentlessly curious in her exploration of material, method and experience as seen in the breadth of her work from Chatroulette performances to stereolithography. I recently visited Kiki in her studio to talk about her work and our conversation ended up encompassing ideas of forming identity, being surprised and being seduced.

Virginia Broersma: So...easy question: what are you working on right now?

Kiki Seror: As you've witnessed, I'm in the middle of stretching some canvases. So in my next pieces I'll be going back to painting. I think my move to Los Angeles has made me want to be physical and work with my hands. L.A. is a physical and material city. Greatest joy is to work out unique techiques to image making. I feel that truly sets my work apart. I really want to question whether or not the image I am making is still going to be a painting. Or even if I use a photographic means, is it a photograph? Is it just an image? So really trying to go between these scenarios. Somewhere between action painting and documentary photography.

So that describes some of the technical aspects of your work. In regard to subject matter, I wanted to talk with you about two oppositional or perhaps complementary ideas I see in your work: intimacy and detachment. One of the first pieces of your work that I saw in person was "Modus Operandi" - a video piece that is a close-up of a woman applying makeup (so it's very intimate) and you feel very close and connected to the person. Then in some of your other work, you create more distance between the viewer and the image through blurring and layering to distort the image. Do you think of your work in those terms -- intimacy and detachment? 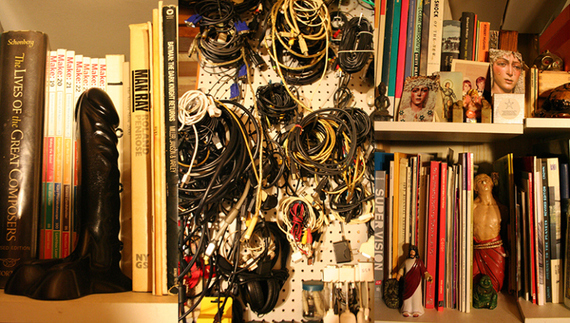 I do -- it's ironic, for instance in "Modus Operandi," I'm working with imagery of the woman and her toiletry, or a ritual of putting on makeup that can be so intimate. However, the actual production of it is a video camera on top of the makeup brush...the models did not know how they were going to look, so there's a realism, and maybe that is the intimacy. Even though it's a very personal moment when you're putting on the makeup, it is this unknown mirror -- surveillance -- and that they have no idea how they were going to be seen, even though they are doing everything to be seen. 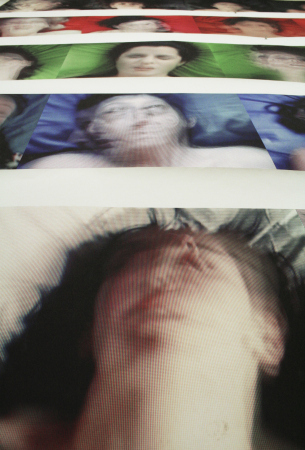 I also find it interesting and somewhat surprising that the pieces that feel more detached (in some ways) are the pieces that are more sexual in nature. Is a sense of detachment something you are aiming for?

It's the uncertainty. There's this duality that exists online; is it going to be porn or is it going to be romance? It just happens to be about sexuality because when you're interacting online, there is possible exposure to unfiltered/uncensored user-generated content, what happens in a group setting is that it debases to the lowest common denominator, and fortunately or not, it's been about sexuality. So when does sexuality become pornography? It's not that I'm detached; it's that I think I am going back and forth. The motion of entering and exiting the online social space is what's creating a blur. Am I being seduced? Or is this just a part of being objectified online? The subject is the medium, and not an object.

Another blurring that happens in your work is the between the distinction between public and private. You talk about surveillance, and obviously you work with intimate themes... my question is twofold -- how do you think about incorporating others, specifically in the pieces that are online that involve another person -- and then also how you think about incorporating yourself and allowing for yourself to be publicly visible in private things?

Years later, I entered Chatroulette. I learned how to in a way bypass a flash input signal, and then I had running in the background on my desktop a software which acted as a broadcast blue screen, and then have that person see themselves come through me, as they were looking at me. It's heavy: allegory. They were surprised. You think you're safe, you're in your home, but you want to be seen. You think that being seen is vulnerable enough, but wait 'til you see your image manipulated by somebody else -- that's vulnerability! And that was the piece. 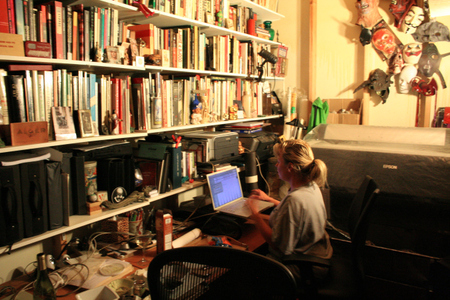 One of the problems I've seen with work that incorporates women in any exchange regarding sex/sexuality/gender is that it ends up as exploitation, despite its best intentions. Do you think about exploitation in your work?

I do -- that's one of the reasons I first worked with language. I felt that language itself, in a way, was more personal than the representation of my body would have been. My heroes -- the feminist performers of the 70's like Hannah Wilke -- their critique was they were so beautiful and, in a way, they kind of exploited themselves, or they weren't taken seriously. I just didn't even want that to be an issue.

What's the most challenging or disliked part of your process?

Oh! That's probably the exhibit! (laughs) because to me, the work is so dead by that point! No, it's not that it's the most disappointing, it's the saddest part. It's hard for me to repeat myself. In a way I'm against signature style. One of my heroes is Martin Kippenberger and why? Because he never bores me and I know that guy was never bored in the studio himself. 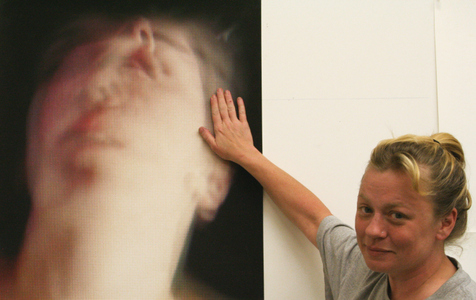 What's your favorite part of your process?

My favorite part is when I set out to do something technically, and it does something else and I'm surprised by it. Or I had no idea the medium could handle it. It's the unknowing that I'm happy with, and striving for, what I need in order to create. To witness, at that moment the outcome is magic. The second time I repeat a result, I know I own the method, but to keep repeating a style is tragic. I guess I get bored easily with the familiar.

Where can we see your work?

I am pleased to be included in a book called Artists Talks, a collection of interviews conducted by Gerald Malt from the Vienna Kunsthalle, published by Moderne Kunst Nürnberg. That's coming out this June and it's funny because that's an interview that was conducted around 2007-2008 and it's just being published! I think looking back at those words and at that time will be interesting.

Then I'm in a two group shows. First one is curated by Tucker Neel called "May Contain Explicit Imagery" will be CB1 Gallery, Los Angeles in the summer. And the second show called "Itch, Scratch, Scar," will open in September and be held at The Fellows of Contemporary Art (FOCA), Los Angeles.

Kiki is represented by CB1 Gallery in Los Angeles, and you can also view her work online here. 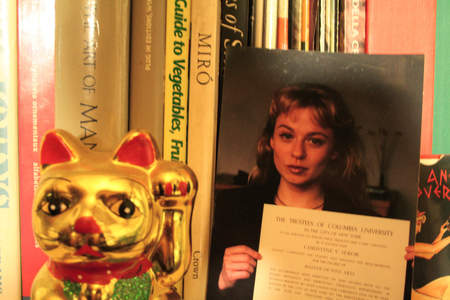 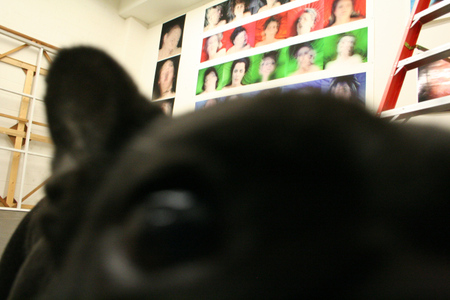