The US Pavilion at the Shanghai 2010 World Expo is not the handsomest pavilion at the Expo nor will it be the most memorable. In fact, it is rather pedestrian, inside and out. For this it has rightly been criticized by architects, planners, designers, and its many, many Chinese visitors who, after waiting two hours to enter, are treated to little more than a few short films and corporate promotions.

The questionable quality of the US Pavilion, however, is symptomatic of a larger problem that the critics mostly have ignored, which is the "Blackwatering" of US public diplomacy: the privatization and outsourcing of every device by which America and its people traditionally have connected with other nations and cultures.

In defense circles, the term "Blackwater" is synonymous with high-priced mercenary soldiers whose unconstrained behavior threatens to derail America's military goals. Applied to public diplomacy, as in Shanghai, "Blackwatering" means missing an historic, once-in-a-lifetime opportunity for authentic communication with the rest of the world.

The Shanghai 2010 World Expo is a globalist's dream become reality. For the first time in memory, the nations of the world have gathered in peace, in one of the world's most dynamic regions, to celebrate "The Century of the City." Seventy million Chinese are expected to visit in person. 100 million visitors from around the world are expected to tour the site online and via the media.

Despite sometimes garish and undecodable exteriors, inside, the pavilions tell stories, literally and allegorically, about their societies' vision of the future. Each converges on what is most relevant and important to its national situation.

The Shanghai Expo's inspiring theme, "Better City, Better Life," from which national pavilion designers have extrapolated many promising narratives. In the "Better City,"

* A quality urban development leads to better experiences and opportunities. * Sustainability is mandatory in the urban settlement and its surroundings. * Places and services adhere to green principles and edify urban residents. * Happier, healthier lifestyles and social behaviors are the goal and the norm. * Governance must be democratic: open, inclusive, and collaborative.

The US Pavilion honors none of these themes or stories. As many observers have noted, the US Pavilion is the perfect embodiment of mainstream corporate America's uni-dimensional approach to urbanity. The US Pavilion's development shares a lot with the typical commercial shopping mall:

To get started, set up a shell corporation. Lobby powerful politicians for favors and support. Spend profligately. Choose designs and materials that are conventional and ugly. Ignore landscaping. In a typical food court, push meals that are fast, fatty, and fried. In the glitzy theater, feature a pricey Hollywood feel-good fantasy. Keep it short, shallow, and light.

Promote your tenants' corporate brands. Sell stuff, lots of stuff. Use copious PR and advertising to keep critics at bay and the press subservient. Bring in celebrities to create a sense of importance.

Lastly, do not educate the public. Do not teach the American people what's at stake and why they should care. Above all, do not involve them in your undertaking - even if it is their imprimatur, their collective spirit that adds precious value that you trade on. Avoid transparency. Hide the books. Flip the property. Divide the assets. Make out like bandits. 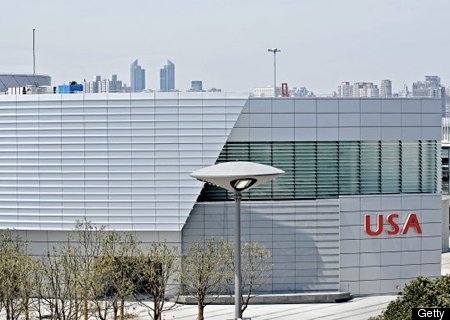 In the end, the US Pavilion offers no vision of the future. Like so many of the busted malls at home that it so closely resembles, the US Pavilion is fragmentary and momentary, not the beacon of hope the Expo hosts expected or that the American people deserve. For a long time, pre-opening polls listed the (in concept) US Pavilion as the most highly anticipated attraction for Chinese Expo-goers, after the giant red China Pavilion. No longer. A week before the Expo, China Daily, the nation's official paper, has removed the US Pavilion from its list of important things to visit and see at the Expo.

How did things come to this sorry pass?

The US Pavilion today is the outcome of a basic policy decision to "Blackwater" American public diplomacy, outsourcing its conduct to private parties. The Bush Administration devised the policy in 2006. To cover for this historic, first-time decision not to seek a Congressional appropriation to pay for a US Pavilion at a major World Expo, the Administration began disseminating a Big Lie: that a law on the books prevented public funding. For the next two years, a careless press repeated this untruth, thus making privatization seem inevitable.

But the Rice State Department's execution was sloppy. In late 2007, for example, it published a competitive RFP for potential pavilion producers with terms intended to be impossible to meet. When, however, the BH&L Group, a team of Expo veterans led by designers Barry Howard and Leonard Levitan, came very close to fulfilling those terms, State was forced to abort the RFP on the verge of negotiations, in December 2007. The pavilion project had come too close to becoming public!

Three months later, in March 2008, without public notice or review, State sole-sourced the US Pavilion assignment to a pair with limited Expo experience but powerful inside-government connections: Ellen Eliasoph, an entertainment attorney with the influential Covington & Burling law firm (often deemed "the shadow State Department"), and former film executive and Expo dabbler Nick Winslow. They incorporated in DC as a nonprofit corporation, "Shanghai Expo 2010, Inc." (SE 2010). Fired up with a half-million-dollar cash contribution from a New Jersey herbal-medicine company (strangely, one with its operations in Shanghai), they went to work passing the hat.

SE 2010 blew through its seed capital in six months trying to sell an over-expensive, poorly designed, dull white elephant. Their $85-million US Pavilion concept, designed by Canadian Clive Grout,with a filmic centerpiece proposed by BRC Information Arts, languished without takers. Eliasoph and Winslow publicly resigned the assignment in October 2008, only to be yanked back to life by Consul General Bea Camp and her staff, apparently acting on their own recognizance.

The curious cherry on this half-baked cake: sometime in 2009 the IRS awarded SE 2010, which had become essentially a commercial real-estate brokerage, with the US Pavilion its sole client, tax exempt status. That means that the American people will be picking up the tab for taxes not paid by SE 2010 and its corporate partners for the privilege of using the USA "brand" on their Shanghai store.

Is this the inspiration for the US Pavilion design? A sponsor tie-in? 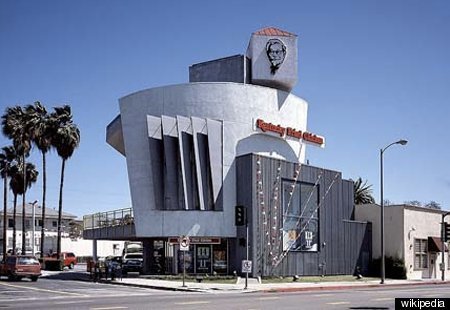 In February 2009, newly elected President Barack Obama appointed former opponent Hillary Clinton as Secretary of State. With the Expo's hosts threatening to foreclose on the US Pavilion and reclaim its well-situated plot, Clinton picked up the phone and went into high gear, fundraising as if once again running for President. Her first committed sponsor was Yum!, the giant fast-food restaurant chain (KFC, Taco Bell, etc.), followed in close order by PepsiCo, Walmart, Monsanto, Microsoft, AT&T, and other global corporations - not exactly paragons of sustainability, healthy lifestyles, or quality urban planning, but loaded with cash.

When the dust had cleared, more than 60 multinationals - Chinese as well as American - had ponied up more than the required $61 million on terms unknown, for which they earned sizable corporate tax deductions. As the US Pavilion's only de facto investors (Congress was not involved and individual Americans were not asked to participate), these corporations essentially owned the US Pavilion. Thus the US Pavilion's shopping-mall style.

SE 2010 did one thing right: it engaged the services of the PR firm Ruder Finn and ad agency Ogilvy & Mather, two of the world's most powerful press brand managers. Their services were worth every penny The mainstream press, when it covered the US Pavilion at all, was a lapdog, uncritically adulatory. Most Americans remained blissfully unaware of the Expo or the privatization and sell-off of the US Pavilion that traded on their name.

As required by law, Clinton finally appointed attorney Jose Villarreal as Commissioner General to oversee the US' privatized Shanghai Expo operations. His authority was seriously undercut by the fact that almost all of the millions raised by Clinton had been spent before he arrived, in ways that still remain a secret.

To an experienced urban planner, it's all too familiar. The fix is in. Now try to fix it.

Hillary Clinton at Friday's opening ceremony for the US Pavilion 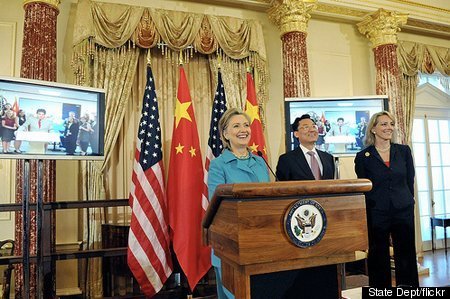 When the Expo opened on May 1, many chickens came home to roost.

At the Expo's "soft opening" last week, the US Pavilion was not ready. Its architecture received faint praise among architects. Its interior attractions remained to be completed. The vital US Online Pavilion, an Internet portal for the hundreds of millions of Expo fans who could not attend the Expo in person - the public face of the US Pavilion, America's online "brand" - an afterthought, was being farmed out to a Shanghai software developer. Reports that the staff and volunteers were working in problematic conditions amid managerial chaos provided scant assurance about things to come.

Now that the US Pavilion has been open for several days, its reviews, to be generous, are mixed. Visitors, after a two-hour wait, enjoy the upbeat attitude of the student "ambassadors" who greet them in Mandarin -- but few are impressed by the three films that constitute the US Pavilion's content. (One reporter noted that the price for the three shorts, about $23 million, is more than the production costs of the Oscar-winning film, The Hurt Locker.) The "American people's" sole walk-on are brief vignettes that flicker on the screen and then are gone. Chinese visitors are reported to have remarked, especially after the hype and long wait, "We expected more from America." Visitors exit the theater into a large hall dedicated to fawning over the 60-odd corporate sponsors whose names and brands are the only aspects of American life and culture to which the pavilion accords recognition.

As things stand, not much can be done to remedy the US Pavilion in Shanghai. Its construction is almost complete. Its team is largely on site. Its program of activities, such as it is, has been calendared. Most of those who will travel to Shanghai to visit the Expo, Chinese and foreigners, have already made their plans and reserved their seats.

But the future of American public diplomacy and how we deal with World Expos remains at stake. Here's what can and must be done...