This year, I was invited to attend my first ever Pride parade. Our friend Robin invited us to join her church on their "float" and march the hour-long parade route together. Robin's church has been nothing but inclusive of us these past four months. You see, our 1-year-old new church plant was kicked out of our parent denomination because of our convictions regarding including the LGBTQ community.

I have long affirmed an inclusive theology, believing that our gay, lesbian, bisexual, transgender and queer friends, their families and allies should be fully welcomed in our churches. I affirmed their role in leadership, whether it was volunteering at events, teaching Bible study, staffing our children's ministry or helping to serve communion. I have affirmed the LGBTQ community at the highest levels and most mundane levels of church participation, for two reasons: 1) I am convinced beyond a doubt God loves each and every part of us as we are created, including our sexual identities, and 2) we're a new church  -- it requires all hands on deck. You want to come out on an incredible summer day and help make lemonade and stack chairs? You're in.

What I did not realize, however, was the overwhelming sense of inclusion I would experience along Portland's downtown streets and waterfront.

My friend and ministry colleague, Rev. Amy Piatt, handed me a poster right before we joined Robin and First Christian Church in the parade staging area on the North Park Blocks. The poster read: 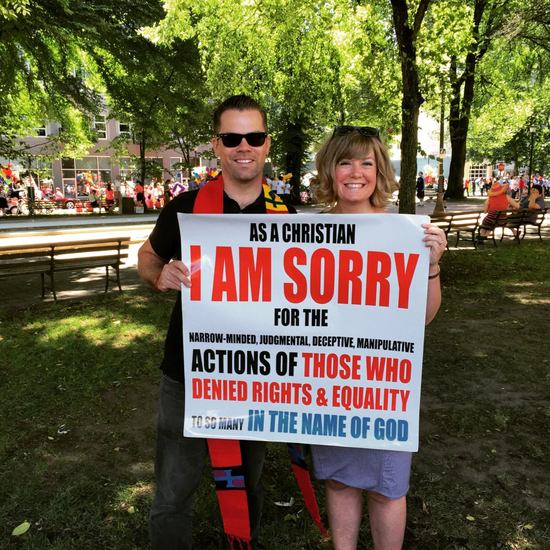 "As a Christian I AM SORRY for the narrow-minded, judgmental, deceptive, manipulative actions of those who denied rights & equality to so many in the name of God."

I had long since admired that poster, seeing it in Amy's office. But I couldn't believe I was actually going to parade around with it.

You see, for the longest time, I would not be allowed to communicate such sentiment, for fear of the picture being posted on social media. That's how intense the fear was for me in my former denomination, and for so many of my friends and colleagues who remain. "Better to let these things lie unsaid," church leaders would tell us. We were not allowed to preside over same-sex weddings, for one, even though many of us either affirmed or secretly presided over them for years. You wouldn't want a photo of you attending such a gay-affirming event to pop up on Facebook for fear of losing your job. Marching around with an apology on my chest at the Pride Parade? Well, that was the most unfathomable thing of all.

But those fears were meaningless to me now. We had already lost everything: two years of funding, friends, our 'faith family' support system. Best to move forward, step by step, and see what this brave new world had to offer.

It's so incredible to take those steps.

Walking down Burnside Avenue, I realized this was not your typical Sunday stroll. I wore my red church pastoral stole (symbolizing the season of Pentecost) and carried that poster in front of me for everyone to see.

And I meant it: I am sorry for the legions of people who have said, done and prayed unimaginable, exclusionary and degrading things in the name of God. I am. Were these hateful (and not so hateful -- some good folks are just stuck in outdated, callous theologies) people my responsibility? I believe, in some ways, yes. As a pastor, I am incredibly concerned with the flourishing and full potential of everyone. And when someone speaks or does things to denigrate others in the name of God, we must try harder. No matter one's professed faith or disinterest in faith. Because, as a Christian pastor, I believe the good news of Jesus is that everyone is fearfully and wonderfully made, and that we are invited to join in a life of love for the common good.

Heady ideas, I know. But I think that in these days of division, derision and despair, people are looking for better ways and better possibilities.

Anyways, I walked down Burnside and the first parade on-lookers squinted and began to read my placard. I did not know what to expect at first. Did they think I was protesting Pride? Would they accept my apology?

I was overwhelmed by the response. People began to cheer. Many asked me to slow down so they could take a picture. Some wiped away tears and simply mouthed "thank you," or "I accept [your apology]." For the next few miles, cheers and cameras and tears greeted us everywhere we went. I was grateful I was wearing sunglasses, because there were a few moments when I simply welled up with tears and couldn't handle it anymore.

There was only one feeling I had: Pride.

And I think that is the point of Pride, at least for me. People joining together in solidarity to say that "love wins," to quote Rob Bell. Love has the final and enduring word.

Our little float was one of only a handful of church groups out to march for Pride this past Sunday. We were far outnumbered by non-profit groups and corporations. Companies like Nike, Intel, Adidas, Comcast and Chipotle spoke much louder than us. The church is following the lead of others, unfortunately. But I was proud to walk with fellow Christians, apologizing to my fellow citizens, for the ways in which people of God have fallen far too short.

As I shared above, for years, I have affirmed the full inclusion of LGBTQ folks at all levels of the church. But what I did not realize is the full potential of what might happen if LGBTQ folks were not just included (as they are beginning to be in so many churches), but helping us co-create better communities of faith and practice.

For one, there is better music. But jokes aside, inclusion is not enough. What I learned yesterday is that if we truly welcome and include, we will be changed. We will be transformed. Because that's what happens when people are vulnerable enough to step out in faith, show up and share with one another. And have conversations. And take photos with each other. And ask for forgiveness. And build bridges. And seek healing.

Our little 1-year old new church continues to press forward in faith. We're growing bit by bit and rolling up our sleeves for faith and justice. I'm so grateful for the hospitality of established, faithful congregations like First Christian Church, who have included us in their physical space and much of their life together. I hope some of my sisters and brothers in church leadership who remain silent or on the sidelines can muster up the courage to step forward and join the growing communities of faith for inclusion.

But most importantly, I hope to meet some of the folks we encountered along the parade route for a cup of coffee and further conversation. I cannot wait to see what might be in store for all of us, yes, everyone one of us, between now and Pride 2016. 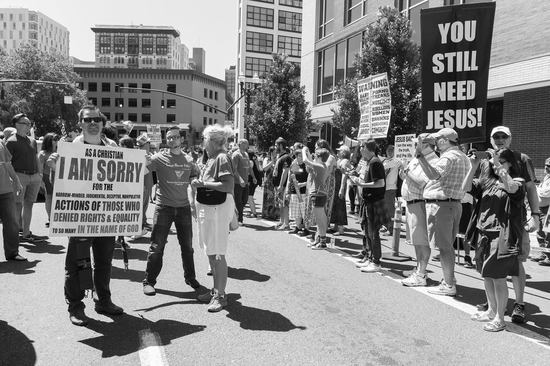 I'd love to hear your stories and connect.

Shoot me a reply below, or: