When is the last time you asked for a compliment? I mean literally. "Hey, could I have a compliment please?" Like most people, the answer is probably never. What if you posed this question to anyone who would answer you publically (OMG, yes!) on Twitter, Facebook, Google Plus or other social media? I recently did that and will share the staggering results. In a nutshell, I'm wondering why I've waited so long to feel the love.

Who needs to hear how great they are?

Turns out we all do. It's an innate part of human nature -- seeking positive connection to affirm our existence. I don't mean superficial or sarcastic praise. I mean genuine, authentic statements that say "I care" or "you matter." Asking for compliments, or receiving any type of positive attention, fills this need. Unfortunately, it's not practiced enough. I could not remember that last time, if ever, when I asked for a compliment.

I was terrified but ready for my monstrous challenge.

First, I asked people I trusted like my mom, my chiropractor, and my friends. I felt awkward and silly, but the more I asked, the more I felt it wasn't that big of a deal. I was vulnerable asking, but everyone offered a real, sincere compliment. Their praise was great to hear and I appreciated all of it.

"I really like that colorful shirt you're wearing today."

"I like your sparkly blue eyes, they go well with your positive personality."

Wow. Did they really say that? Not only did that say it, they meant it. And strangely, they benefited from my asking because they enjoyed doling out the praise.

The light bulb went off. By asking for a compliment, you direct positive attention. There's power and immense productivity in that. Giving someone else a reason to be positive actually is a gift and can lift their spirits, depending on the day they're having.

So why don't we give or ask for compliments more often? We are so busy with our own schedules that we forget what it's like to acknowledge the little things -- a color that looks great on someone, a new haircut, a sense of being inspired by someone else's outlook, a task that a colleague performed, perhaps, unprompted, that made our day easier. We need to pause to praise ourselves and those around us. It's even more meaningful when someone else does this for us.

Asking for "pause-a-tive" attention through giving or asking for a compliment demands a time-out to notice someone and direct positivity. By pausing and offering a genuine compliment, you invite a two-way experiment in vulnerability, both to you and whoever is giving or receiving the compliment. It's one thing to ask for a compliment. It's another to receive it fully without deflection. When we are vulnerable we let our guard down to connect and fulfill one of our deepest human needs.

I discovered that people wanted to give me compliments. Nobody declined my invitation. Sometimes, I reciprocated and the recipient's face would light up with a wide smile, or their eyes would meet mine with delight. It's as nourishing to give a compliment as it is to get one, and sometimes it would be returned to me two-fold or more.

"I love how strong you are and how you never stop trying."

I wanted to be bold. I asked myself what could be the easiest way to ask the most people for a compliment? The answer popped into my mind, Facebook.

Asking for a compliment is awkward enough in person. I was terrified by the idea of sounding greedy and needy on my Facebook wall. Would people mock me? The fear of sounding egotistical, selfish, and greedy to the masses flooded my brain. Would people ignore me? Would I get sarcastic responses? Would people take me seriously?

I had to go big or not at all. I logged into Facebook and I wrote on my wall, "I'm asking for compliments today. What compliment do you have for me today?"

Here's my Facebook wall transformed into a waterfall of compliments: 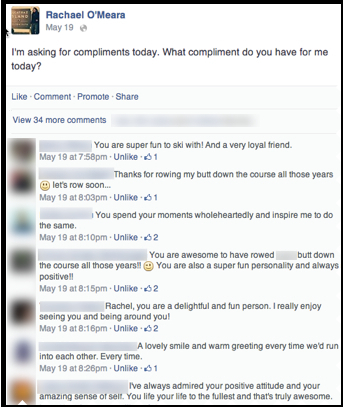 An astonishing thing happened. While a mere eight people liked my post, 34 people gave sincere, honest and beautiful compliments to me within a few hours. They were vulnerable, surprising, and remarkable. I was stunned. They were stunned. I realized that most people were as hungry for positive attention as I was, but hadn't given themselves the permission to ask for it. Each one of those compliments felt great to get. If I was that scared to ask for a compliment, most likely everyone else was, too.

The experiment continued, but this time without me. One person reposted my post on their wall and got 22 compliments in a few more hours. I jumped in. I challenged the remaining 33 individuals who complimented me to repost my question to their wall and ask their friends for a compliment. Could we create a viral compliment frenzy? Two others re-shared and each one received two dozen compliments.

What did I learn from all this? My single compliment set off almost 100 acts of positive attention. If I hadn't risked asking for a compliment, not only would I have not had received any, but everyone who participated wouldn't have felt recognized as the giver of one, and he or she wouldn't have received any. Through this one act of vulnerability, I stretched my courage and set off a chain reaction for anyone who risked asking for his or her own parade of positive attention. It felt awesome.

What if each of us started our own Pause-a-tive Attention experiment? You and others will receive positive attention and feel seen and valued. We are starved for this affirmation and people are ready and happy to give. All you need to do is ask.

Start your own experiment with any of these ideas. Try it for a day. Leave a comment on what happened:
• Ask someone to give you a compliment face to face.
• Leverage social media to set up a parade of pause-a-tivity. Post or tweet:
I'm asking for compliments. Can I have a compliment today? Tweet this!
• Give someone you don't like a compliment. Follow 'Mom's' advice. Even if someone isn't your favorite person, find something nice to say.
• Make eye contact with someone. We tend to avoid eye contact with strangers. Take a deep breath, and see what happens and how it makes you feel. Connected? Affirmed? Seen? Create a pause-a-tive attention moment.
• Smile at a stranger. It only takes a few seconds to create pause-a-tive attention - the flash of a smile can do that in an instant.
• Ask me for a compliment at www.facebook.com/rachaelomeara

People are dying to give you pause-a-tive attention. You just need to ask for it.

Voting Made Easy
Register to vote and apply for an absentee ballot today
Register now
More:
healthy livingimpactHealthy Living Spiritpausecompliments
Newsletter Sign Up
The essential guide to taking care of your mind and body
Subscribe to HuffPost’s wellness email
Successfully Subscribed!
Wellness delivered to your inbox