I cannot really claim to be a voracious reader. I don't devour vast quantities of books, speed-reading through them the way my boyfriend sometimes appears to. And perhaps my dyslexia is only part of the reason. Be that as it may, what I can say about my preferred way of reading is that it is thorough. In addition, I truly get a kick out of rereading books that are dear to me. Few things equal the pleasure I can derive from finding stylish or outrageous or funny sentences I may not have singled out the first time around.

Rick Whitaker would understand and appreciate my passion for revisiting beloved works of literature. An avid bibliophile, he has heeded his personal library's call for repeated attention and prominently featured its 500 plus tomes in his new novel, An Honest Ghost. The result is an astonishing literary feat that is entirely constructed out of complete unedited sentences gleaned from the author's library. Taken out of their original context and ingeniously recycled into a mosaic of quotations, these sentences now tell a compelling new story that, according to the author, bears a close resemblance to his own life: the narrator, obsessed and preoccupied with his extensive library, decides to write a memoir about his life, his boyfriend, his son and his son's mother, using only sentences he can find in the books he is revisiting. This is all but one of the multiple double layers out of which this brilliantly conceived work is elegantly fashioned. It is no coincidence that a quote by Susan Sontag made its way into the book's first paragraph: "Life lived by quotations." 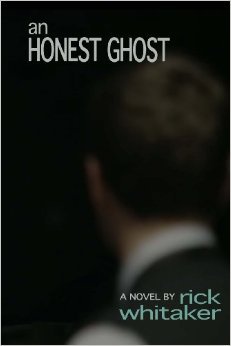 Of course, fashioning a book exclusively out of quotes could easily be dismissed as a nifty way to ward off writer's block, avoid the demands of being "original" and bypass what Joan Didion once called "the mortal humiliation of seeing one's own words in print." But while the collage technique Whitaker used may have offered him a helpful structure and welcome creative restraints, An Honest Ghost is much more than the sum of its parts. In the same way that each part of the composition in a Paul Cézanne painting is as important as the whole, the entire composition of the book is affected with every new quotation, creating a dizzying effect. I read (and reread) An Honest Ghost as a novel, an essay, a poem and a musical score, all at once, and was repeatedly dazzled and befuddled by how Whitaker surgically stitched all those genres/voices together. He is the Dr. Frankenstein of American Literature, jolting it with electricity, magic, and lots of sparks. It's alive! It's alive!

At first glance, An Honest Ghost shares a striking resemblance to David Shields's highly controversial Reality Hunger, published in 2010: Both books consist of hundreds of quotations that go unacknowledged in the body of the text but are revealed in an appendix. However, because Whitaker's book is a novel and Shields's a manifesto, the spirit of one and the other could not be any more different. Furthermore, Shields famously challenged his readers to not pay any attention to his source material, whereas Whitaker encourages the reader to explore the meticulously assembled list of attributions in the back of the book and get wise about each sentence's origin -- a mind-blowing 2,049 of them. And indeed, much of the reading pleasure that can be derived from Whitaker's flinty, funny and incandescent prose comes from discovering how all the different and unique authors who have contributed to his novel coalesce into one singular body.

Here is an example of just two sentences that form a single paragraph, pairing Kafka with Montaigne, respectively: "How much my life has changed, and yet how unchanged it has remained at bottom! Every moment it seems to me that I am running away from myself." Stitched together, these two sentences at first struck me as fully Beckettian: Kafka and Montaigne seem to be speaking to us from beyond the grave, completing one another's thoughts about their fickle, elusive selves. Knowing who wrote what did not in the least shatter my original impression or spoil the reading experience -- much to the contrary, it only added an element of intrigue and fun, the way a blind wine tasting might invigorate, entertain and educate. Whitaker's operation table is full of such improbable, yet delightful chance encounters, forcing a double take on every sentence.

Still, to me, this is but the surface of it all.

The book's dedication is the only sentence "honestly" written by the author himself: "To David Whitaker." This dedication from father to adopted son may be the knot that ties together the whole tapestry of quotes, further complemented by the epigraph by Thomas Szasz:

Happiness is an imaginary condition, formally often attributed by the living to the dead, now usually attributed by adults to children, and by children to adults.

Seen in this light, the author/narrator's drama is not just bibliophilic but biblio-filial. The narrator's obsessive quest to find his own truth revealed through his personal library cannot be separated from the author's daily, sometimes hourly, reassessment of his new identity as a parent of an (adopted) teenager.

In 1999, Whitaker published Assuming the Position -- A Memoir of Hustling, in which he coolly described in great and sometimes harrowing detail his traumatic adolescence in an emotionally and physically abusive household, as well as a later phase in his life dominated by drug addiction, promiscuity and prostitution. The memoir serves here as a clear indicator that this author is not afraid of disclosing even the most intimate details about his personal life. Since then, Whitaker has, by his own account, developed a deep suspicion towards the impulse to add something new to a world that is saturated and over-productive, yet marred by the neglect of what already exists -- hence his refusal to procreate and, as in his new novel, his decision to abstain from writing sentences of his own making.

Perhaps the author's lifelong search for a positive father figure as well as the desire to become one of his own is the true subtext in this Shakespearian drama that even takes its title from Hamlet. In other words, the author/narrator acts both as a father figure to an adopted son and as heir to a cherished, ghostly collection of books that call out to him to be remembered.

The ideal way to imbibe Whitaker's masterful act of literary ventriloquism is probably with a glass of your preferred bourbon, feet up, and in blissful solitude. You've got to be willing to submit to the spell Whitaker is working to cast. He is a charismatic raconteur who never lets you doubt the sincerity of his act, punctuating each and every one of his borrowed sentences with a cool smile, as if to remind you to take another sip and go slow. After all, An Honest Ghost took this most honest of ghostwriters a reported eight years to complete.